Bioinformatics teacher page. "Adrenoleukodystrophy (ALD) is a rare, genetic disorder characterized by the breakdown or loss of the myelin sheath surrounding nerve cells in the brain and progressive dysfunction of the adrenal gland. ALD is one of a group of genetic disorders called the leukodystrophies that cause damage to the myelin sheath, the fatty covering — which acts as an insulator — on nerve fibers in the brain. There are several forms of ALD. Onset of the classic childhood form, which is the most severe and affects only boys, may occur between ages 4 and 10. Features of this form may include visual loss, learning disabilities, seizures, poorly articulated speech, difficulty swallowing, deafness, disturbances of gait and coordination, fatigue, intermittent vomiting, increased skin pigmentation, and progressive dementia. To begin, go to Biology Student Workbench ( ) and log in. Create a new session by hitting the button.

Open the word file below. DNA sequence in word format.

Biotechworkshop. Biomathematics. Biotechorg. BioNumbers - The Database of Useful Biological Numbers. Dynamic Gene. Tutorials. Resources for the SCALE-IT Biology Curriculum Workshop June 2009. This page will contain resource used at the workshop and participant projects that can be found following the workshop. 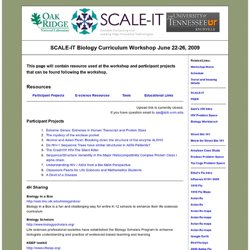 Upload link is currently closed. If you have question email to sje@sbb.uvm.edu Extreme Genes: Extremes in Human Transcript and Protein Sizes The mystery of the enolase pocket Alcohol and Asian Flush: Breaking down the structure of the enzyme ALDH2 Do HIV-1 Sequence Trees have similar structures in AIDS Paitients? The Crash!!!!! Sequence/Structure Variability in the Major Histocompatibility Complex Protein Class I alpha chain.

Understanding HIV / AIDS from a Bio-Math Perspective Classroom Pearls for Life Sciences and Mathematics Students A Devil of a Disease 4H Sharing Biology in a Box is a fun and challenging way for entire K-12 schools to enhance their life sciences curriculum Life sciences professional societies have established the Biology Scholars Program to enhance biologists understanding and practice of evidenced-based teaching and learning Online biology textbbook Tools. Case It Home Page. Public Understanding of Biotechnology (PUB) [file size 3,300 KB] A cartoon poster explaining how genetic conditions such as albinism and Down syndrome occur. 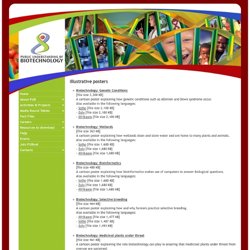 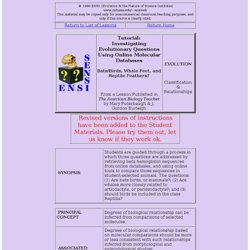 This lesson provides a very nice extension a lesson on whale evolution " ", (perhaps more appropriate for high school / middle school levels) in which students "experience" the sequence of discoveries in which a number of transitional fossils gradually filled in much of the "gap" between the purported terrestrial whale antecedents and modern type whales, based on morphology.

Welcome to BioTech. Insultingly Stupid Movie Physics. The secret agent fixes his steely gaze on the crowd across the street in a park seven stories below. 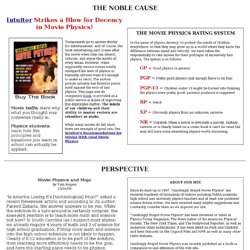 He methodically assembles his weapon. First he locks together the stock and barrel, then snaps his telescopic sight into position. Lastly, he screws on an oversized silencer . He carefully selects a shiny 7.62 mm NATO round (chosen, no doubt, for its long range accuracy) and chambers it using the weapon's bolt action. A dastardly terrorist wanders into view.

Unfortunately for the secret agent, he's not so likely to go undetected. Even silencing the muzzle blast to a mere "fut" is next to impossible. Considering that the threshold of pain is only 130 dB, we're actually glad Hollywood sound tracks don't accurately reproduce the noise of muzzle blasts. SWAT teams sometimes use silencers, not for stealth, but to insure that they will be able to hear if one of the SWAT team members fires a shot inside the confined space of a room. B. BEDROCK Introduction to Problem Spaces. Bioinformatics Education Dissemination: Reaching Out, Connecting and Knitting-together The following materials provide a brief conceptual introduction to our idea of a problem space and how we think this approach to curriculum development can be used to promote innovative undergraduate teaching and learning. This work is part of the BEDROCK Bioinformatics Education Project's efforts to support a national community of faculty who are interested in bringing bioinformatics tools and data resources into their biology courses. 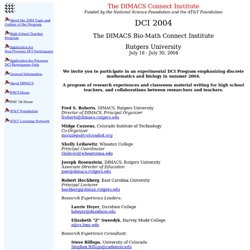