Water in the Netherlands

Japan Building "Great Wall" Against Tsunamis. Tsunami two years on: Japan finally gets warning system that would have saved hundreds of lives. From undersea pressure sensors to mobile phone alarms ringing seconds before buildings even begin to shake, a raft of innovative technologically devices have put Japan at the forefront of disaster technology. 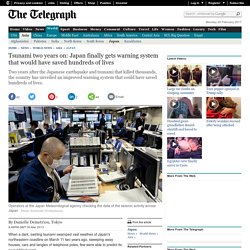 However, March 11, 2011 proved that even Japan did not have the means to deal with an incident on such a scale – the 9.0 earthquake being the largest ever recorded in Japan – prompting a two-year £25 million (3.5 billion yen) upheaval of its national disaster system. "I think it is true to say that Japan has the world's highest quality systems in relation to issuing near shore tsunami warnings," said Takeshi Koizumi, a senior coordinator for international earthquake and tsunami information. "This is not only because of our hardware or software, but because of Japan's experience. "But we had not expected a 9-plus magnitude earthquake. Disasters: Learning from Japan's tsunami. Bangkok - Japan is widely regarded as well-prepared for disasters, being used to frequent tsunamis, cyclones, earthquakes and volcanic activity, but a year after the calamitous events of 11 March 2011, the lessons from the multi-disaster still resonate. 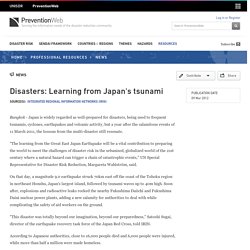 Tsunami Facts, Tsunami Information, Tsunami Videos, Tsunami Photos. A tsunami is a series of ocean waves that sends surges of water, sometimes reaching heights of over 100 feet (30.5 meters), onto land. 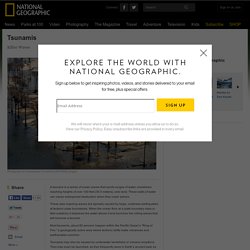 These walls of water can cause widespread destruction when they crash ashore. These awe-inspiring waves are typically caused by large, undersea earthquakes at tectonic plate boundaries. When the ocean floor at a plate boundary rises or falls suddenly it displaces the water above it and launches the rolling waves that will become a tsunami. Most tsunamis, about 80 percent, happen within the Pacific Ocean’s “Ring of Fire,” a geologically active area where tectonic shifts make volcanoes and earthquakes common.

Tsunamis may also be caused by underwater landslides or volcanic eruptions. Tsunamis race across the sea at up to 500 miles (805 kilometers) an hour—about as fast as a jet airplane. Hurricane Facts, Hurricane Information, Hurricane Videos, Hurricane Photos. Hurricanes are giant, spiraling tropical storms that can pack wind speeds of over 160 miles (257 kilometers) an hour and unleash more than 2.4 trillion gallons (9 trillion liters) of rain a day. 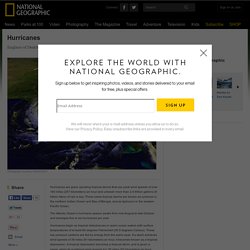 These same tropical storms are known as cyclones in the northern Indian Ocean and Bay of Bengal, and as typhoons in the western Pacific Ocean. The Atlantic Ocean’s hurricane season peaks from mid-August to late October and averages five to six hurricanes per year. Hurricanes begin as tropical disturbances in warm ocean waters with surface temperatures of at least 80 degrees Fahrenheit (26.5 degrees Celsius). These low pressure systems are fed by energy from the warm seas. If a storm achieves wind speeds of 38 miles (61 kilometers) an hour, it becomes known as a tropical depression. Hurricanes are enormous heat engines that generate energy on a staggering scale. Hurricanes spin around a low-pressure center known as the “eye.” These storms bring destruction ashore in many different ways. Flood Safety Tips, Flood Preparation, Flood Readiness.

Here are some safety tips to prepare for rising water—and what to do once a flood has begun. 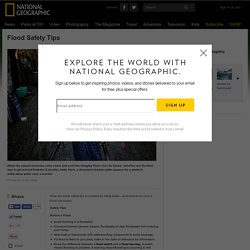 Safety Tips. Flood Information, Flooding Facts, Flash Floods, Photos. Water Management - The Delta Approach. Hundreds Die In Dutch Floods (1953) BBC News - Memories of the great flood of 1953. Dutch flood 1953. What are spring and neap tides? Tides are long-period waves that roll around the planet as the ocean is "pulled" back and forth by the gravitational pull of the moon and the sun as these bodies interact with the Earth in their monthly and yearly orbits. 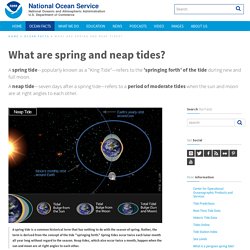 During full or new moons—which occur when the Earth, sun, and moon are nearly in alignment—average tidal ranges are slightly larger. This occurs twice each month. The moon appears new (dark) when it is directly between the Earth and the sun. Natural Disasters & Weather. Holland's Barriers to The Sea. Watersnoodramp 1953 - Wat gebeurde er? De Nederlandse Publieke Omroep maakt gebruik van cookies. 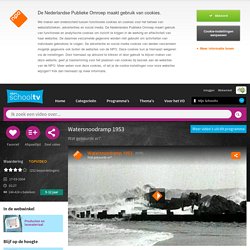 Deltawerken - Deltaworks. History Studies conducted in 1937 by Rijkswaterstaat (Department of Public Works), showed that safety in many parts of the Netherlands could not be guaranteed at times of storms and high sea levels.

In the densely populated areas near the river mouths of the Rhine, the Meuse, and the Schelde, it proved very difficult to build new dikes or strengthen the original ones. Deltawerken - The flood of 1953. Eerste beelden van de Stormramp (1953) The disaster of the 1953 flood. The 1953 flood is the most recent large coastal flood in Europe. 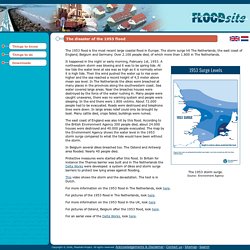 The storm surge hit The Netherlands, the east coast of England, Belgium and Germany. Over 2.100 people died, of which more than 1.800 in The Netherlands. The 1953 storm surge. Source: Environment Agency It happened in the night or early morning, February 1st, 1953.