We hebben geen idee hoe de wereld om ons heen er écht uitziet, zegt deze hoogleraar. Your Mind Is So Powerful It Creates Your Reality: What Isaac Lidsky Learned by Going Blind at Age 25. This Article Won’t Change Your Mind - The Atlantic. “I remember looking at her and thinking, ‘She’s totally lying.’ 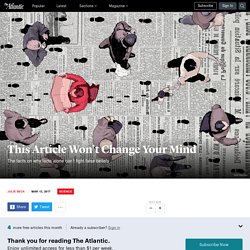 At the same time, I remember something in my mind saying, ‘And that doesn’t matter.’” For Daniel Shaw, believing the words of the guru he had spent years devoted to wasn’t blind faith exactly. It was something he chose. “I remember actually consciously making that choice.” There are facts, and there are beliefs, and there are things you want so badly to believe that they become as facts to you. How To Fine-Tune Your Bullshit Detector. Heard of the B.S. 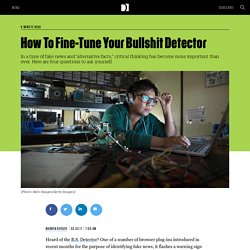 Detector? One of a number of browser plug-ins introduced in recent months for the purpose of identifying fake news, it flashes a warning sign whenever the user is about to click on a site deemed "questionable. " From this basement came a piece of fake news about who had desecrated a church in Sweden. He knows getting out of bed before dawn is a bad habit and one he wants to give up. 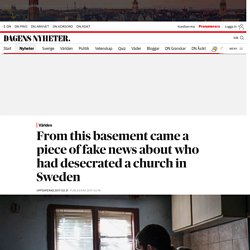 As ever though he is already awake. As the sunrise begins to reflect in the shared pool of The Brittany, the Florida residential complex he lives in, former computer repair man Michael grabs his support frame and goes to the living room. He pours some coffee and begins going through his news feed. He doesn’t trust CNN, nor CBS or NBC any more. On Facebook though he can fill up on his favourite sources. A Brief History of Facts. The concept of ‘the fact’ first appears in Renaissance Latin, but the word only entered common usage in the 1660s. 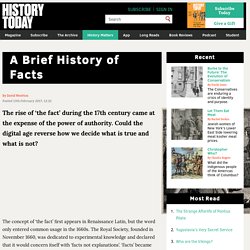 The Royal Society, founded in November 1660, was dedicated to experimental knowledge and declared that it would concern itself with ‘facts not explanations’. ‘Facts’ became part of a modern vocabulary for discussing knowledge – also including theories, hypotheses, evidence and experiments – which emerged in the 17th century. All these words existed before, but with different meanings: ‘experiment’, for example, simply meant ‘experience’.

Alongside this new conception of facts, a philosophical discussion developed about what they actually were. David Hume (1711-76) was the first ‘philosopher of the fact’. Trump Attacks Media Over Terrorism Coverage. What we talk about when we talk about Donald Trump and ‘gaslighting’ Charles Boyer and Ingrid Bergman in director George Cukor’s 1944 film “Gaslight” — a term that has now become a buzzword in psychology and politics. 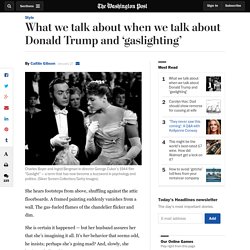 (Silver Screen Collection/Getty Images) She hears footsteps from above, shuffling against the attic floorboards. Harry Frankfurt 'On Bullshit' Fake News. Symbolism allegory of the cave. Overvaluing confidence, we’ve forgotten the power of humility. Detail from Interior with Young Man Reading by Vilhelm Hammershøi, 1898. 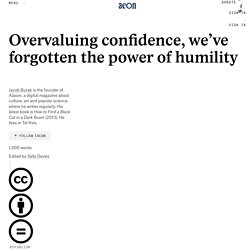 Courtesy Wikimedia ‘If I only had a little humility, I’d be perfect,’ the media mogul Ted Turner supposedly said sometime in the 1990s, in a moment of narcissistic exuberance. While Turner has been much humbler since, today’s breed of tech entrepreneurs often display a similar arrogance. Why be humble? Barack Obama on fake news: 'We have problems' if we can't tell the difference. President Barack Obama has spoken out about fake news on Facebook and other media platforms, suggesting that it helped undermine the US political process. 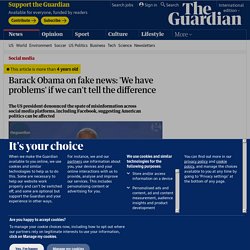 “If we are not serious about facts and what’s true and what’s not, if we can’t discriminate between serious arguments and propaganda, then we have problems,” he said during a press conference in Germany. Since the surprise election of Donald Trump as president-elect, Facebook has battled accusations that it has failed to stem the flow of misinformation on its network and that its business model leads to users becoming divided into polarized political echo chambers. Can You Tell Fake News From Real? Study Finds Students Have 'Dismaying' Inability. 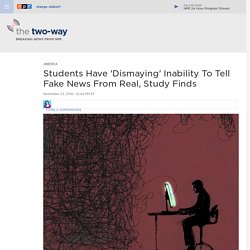 Gary Waters/Ikon Images/Getty Images hide caption toggle caption Gary Waters/Ikon Images/Getty Images Stanford researchers assessed students from middle school to college and found they struggled to distinguish ads from articles, neutral sources from biased ones and fake accounts from real ones. If the children are the future, the future might be very ill-informed. What Is Advaita or Nonduality? What is Advaita, or nonduality? 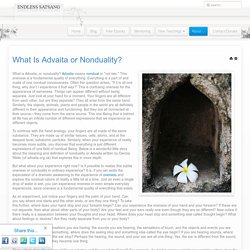 Advaita means nondual or "not two. " This oneness is a fundamental quality of everything. Everything is a part of and made of one nondual conciousness.