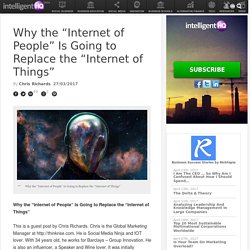 Chris is the Global Marketing Manager at He is Social Media Ninja and IOT lover. Elon Musk’s Billion-Dollar Crusade to Stop the A.I. Apocalypse. I. 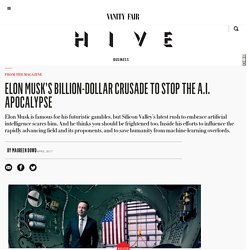 Running Amok It was just a friendly little argument about the fate of humanity. Demis Hassabis, a leading creator of advanced artificial intelligence, was chatting with Elon Musk, a leading doomsayer, about the perils of artificial intelligence. They are two of the most consequential and intriguing men in Silicon Valley who don’t live there. Hassabis, a co-founder of the mysterious London laboratory DeepMind, had come to Musk’s SpaceX rocket factory, outside Los Angeles, a few years ago.

“Robotic Nudging” Will Make Us Better People. Robots are going to start pushing you to be nicer to people, through a technique known as “robotic nudging.” 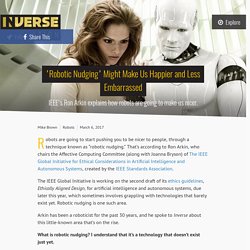 That’s according to Ron Arkin, who chairs the Affective Computing Committee (along with Joanna Bryson) of The IEEE Global Initiative for Ethical Considerations in Artificial Intelligence and Autonomous Systems, created by the IEEE Standards Association. The IEEE Global Initiative is working on the second draft of its ethics guidelines, Ethically Aligned Design, for artificial intelligence and autonomous systems, due later this year, which sometimes involves grappling with technologies that barely exist yet.

Robotic nudging is one such area. Arkin has been a roboticist for the past 30 years, and he spoke to Inverse about this little-known area that’s on the rise. ‘Artificial Intelligence’ Has Become Meaningless - The Atlantic. In science fiction, the promise or threat of artificial intelligence is tied to humans’ relationship to conscious machines. 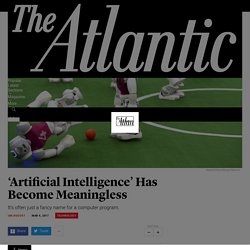 Whether it’s Terminators or Cylons or servants like the “Star Trek” computer or the Star Wars droids, machines warrant the name AI when they become sentient—or at least self-aware enough to act with expertise, not to mention volition and surprise. What to make, then, of the explosion of supposed-AI in media, industry, and technology? In some cases, the AI designation might be warranted, even if with some aspiration. Autonomous vehicles, for example, don’t quite measure up to R2D2 (or Hal), but they do deploy a combination of sensors, data, and computation to perform the complex work of driving. How to Upgrade Judges with Machine Learning - MIT Technology Review.

When should a criminal defendant be required to await trial in jail rather than at home? 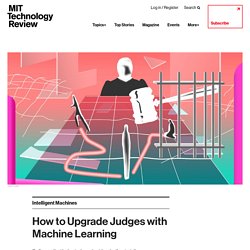 Software could significantly improve judges’ ability to make that call—reducing crime or the number of people stuck waiting in jail. In a new study from the National Bureau of Economic Research, economists and computer scientists trained an algorithm to predict whether defendants were a flight risk from their rap sheet and court records using data from hundreds of thousands of cases in New York City. When tested on over a hundred thousand more cases that it hadn’t seen before, the algorithm proved better at predicting what defendants will do after release than judges. Jon Kleinberg, a computer science professor at Cornell involved in the research, says one goal of the project was to show policymakers the potential benefits to society of using machine learning in the criminal justice system. 'As well or better than humans': Automation set for big promotions in white-collar job market.

Tory Shoreman thought she was safe. 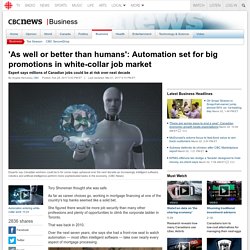 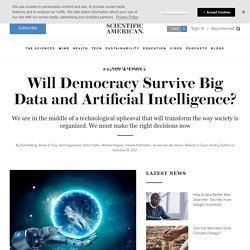 “Enlightenment is man’s emergence from his self-imposed immaturity. Motherboard - The future is wonderful, the future is terrifying. What Will Artificial Intelligence Look Like After Siri and Alexa? - The Atlantic. In the coming decades, artificial intelligence will replace a lot of human jobs, from driving trucks to analyzing X-rays. 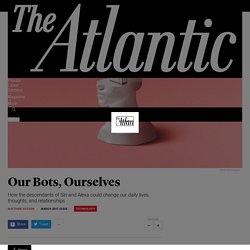 But it will also work with us, taking over mundane personal tasks and enhancing our cognitive capabilities. As AI continues to improve, digital assistants—often in the form of disembodied voices—will become our helpers and collaborators, managing our schedules, guiding us through decisions, and making us better at our jobs. We’ll have something akin to Samantha from the movie Her or Jarvis from Iron Man: AI “agents” that know our likes and dislikes, and that free us up to focus on what humans do best, or what we most enjoy. Inside Libratus, the Poker AI That Out-Bluffed the Best Humans. For almost three weeks, Dong Kim sat at a casino in Pittsburgh and played poker against a machine. 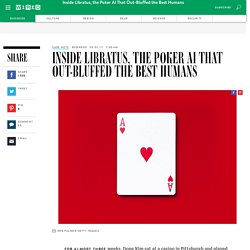 But Kim wasn’t just any poker player. The Struggle to Make AI Less Biased Than Its Creators. The dirty little secret is out about artificial intelligence. 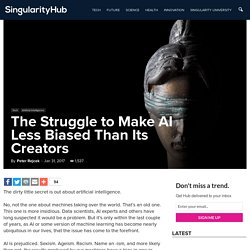 No, not the one about machines taking over the world. That’s an old one. This one is more insidious. Data scientists, AI experts and others have long suspected it would be a problem. VR + AI: the very real reality of virtual artificial intelligence. TLDR; Virtual Reality can be immersive and fun, but add natural deep Artificial Intelligence and you quite literally get a new world which — beyond the computer generated world around you — may not actually be so virtual. As applications in Virtual Reality are increasing in quality and variety, early developers are providing us with new interaction dynamics that are expanding the richness of immersive virtual worlds.

By layering in aspects of natural artificial intelligence, experiences are developing that lose the feeling of being so “unreal;” distinct memories, interactions and relationships are being created that cause the user to question — well, if it happens in real life, but inside of a headset, does that not make it real? Of our five senses, Head Mounted Displays (HMDs) handle vision, a solid pair of 3D headphones like OSSIC handle sound; AxonVR and others are working on haptics and touch…next up is smell and taste, those should be, well…interesting.

Why IBM's Watson should have run for president: Smart algorithms are better than dumb politicians — Quartz. The best candidate for the office of president of the United States wasn’t on the ballot last November. It was Watson, IBM’s cognitive computing engine. Watson would be a president of intelligence and integrity, temperament and dedication, working round the clock to devise solutions to our toughest domestic and international challenges. Forget AI. The real revolution could be IA. This past Spring, AlphaGo — an artificial intelligence (AI) machine — beat the human world champion in a five-game match of Go, an ancient Chinese board game once considered so difficult that a computer could never master it. Since then an improved version of the game, called Master, has been slaying some of the game’s top players with a streak of 60 wins. Last year, ride-sharing company Uber debuted a pilot programme involving self-driving cars.

Elsewhere in the world, factories have become automated, churning out products using robotic workers designed with AI. Predictive AI: Seeing Through the Chaos. Musk Is Preparing to Release "Brain Hacking Tech," And He's Not Alone. In Brief Today, Elon Musk stated that updates regarding his neural lace, which is meant to augment the human mind, are coming next month. In October, Bryan Johnson announced a $100 million investment to put computers in our brains. How to Hold Algorithms Accountable. Algorithms are now used throughout the public and private sectors, informing decisions on everything from education and employment to criminal justice.

But despite the potential for efficiency gains, algorithms fed by big data can also amplify structural discrimination, produce errors that deny services to individuals, or even seduce an electorate into a false sense of security. Artificial Intelligence Is Driving Huge Changes at Google, Facebook, and Microsoft. Businessinsider.com. Donald Trump appears at a campaign event in Geneva, Ohio, U.S., October 27 2016.

Would you let an algorithm choose the next US president? Event 07/11 Algorithmic accountability and transparency — Marietje Schaake. What Google Learned From Its Quest to Build the Perfect Team. So Rozovsky started looking for other groups she could join. This Mathematician Says Big Data Is Causing a ‘Silent Financial Crisis’ How a chatbot is helping homeless people find housing. Artificial Intelligence Will Be as Biased and Prejudiced as Its Human Creators. We Need Data to Re-Build Trust in Our Police Departments.

When your boss is an algorithm — FT.com. In the gig economy, companies such as Uber and Deliveroo manage workers via their phones. Singapore to use intelligent 'chatbots' to deliver public service. Singapore has announced a new partnership with Microsoft to create a digital government services platform that will shift towards conversational computing. Announcing the initiative at the World Cities Summit in the city-state on 12 July, Dr Vivian Balakrishnan, Minister for Foreign Affairs and Minister-In-Charge of the Smart Nation Initiative, said the new medium, conceptually referred to as “Conversations as a Platform” will use chatbots — intelligent software programmes that simulate human behaviour.

Forget ideology, liberal democracy’s newest threats come from technology and bioscience. The BBC Reith Lectures in 1967 were given by Edmund Leach, a Cambridge social anthropologist. “Men have become like gods,” Leach began. AI’s Language Problem. About halfway through a particularly tense game of Go held in Seoul, South Korea, between Lee Sedol, one of the best players of all time, and AlphaGo, an artificial intelligence created by Google, the AI program made a mysterious move that demonstrated an unnerving edge over its human opponent. On move 37, AlphaGo chose to put a black stone in what seemed, at first, like a ridiculous position.

AI: What else could intelligence be? - The Long and Short. Big Data Is Only as Smart as Those Who Generate It. At the Heart of Facebook’s Artificial Intelligence, Human Emotions. Nvidia is Creating A New Headquarters...in Virtual Reality. Researchers using MRI to quantify human intelligence. Artificial intelligence in the legal profession should be regulated, op-ed argues. A Short History of Machine Learning. Une intelligence artificielle pour président. A Business Intelligence Strategy for Real-Time Analytics - RTInsights. Where machines could replace humans. La technologie est-elle un programme politique. We’re on the Brink of a Revolution in Crazy-Smart Digital Assistants. Using Artificial Intelligence to Humanize Management and Set Information Free. Just How Smart Are Smart Machines? Willingness to Experiment in Governance and Service Delivery. E-reputation : « Les bots sont capables du meilleur comme du pire » Why reputation is the currency of the future.

Gamified compliance: China's reputation network Huxleys to the full Orwell / Boing Boing. "Government as platform" provides a compelling vision for the future of government and society. Shanghai Citizens May Soon Have Their Credit Scores Lowered for Not Visiting Their Parents. The Future is Without Apps — Fwd: Thoughts. Watson for President? Reflections on Future Governance. Systematically Designing The Future Of Governance. Global Governance... Into The Future. Technology Will Replace the Need for Big Government. Placemeter’s urban intelligence platform gets smarter. Rapport de l’administrateur général des données : rencontre avec Henri Verdier. Political arithmetic: Data ethics and government. In Kuwait, all citizens, residents and visitors must give DNA sample or face prison. Melinda Gates Wants to Take the Bias Out of Data.