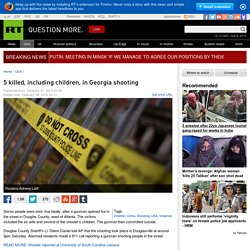 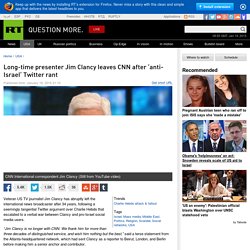 “Jim Clancy is no longer with CNN. We thank him for more than three decades of distinguished service, and wish him nothing but the best,” said a terse statement from the Atlanta-headquartered network, which had sent Clancy as a reporter to Beirut, London, and Berlin before making him a senior anchor and contributor. Although neither Clancy nor CNN revealed the reasons for the departure, almost all media outlets connected it with a somewhat incoherent Twitter spat that began in the wake of the fatal attacks on Charlie Hebdo, the satirical French magazine. Muslim sues Ohio jail after being 'forced' to attend church services. $3mn awarded in lawsuit to family of prisoner who died as guards watched laughing. FBI to formally accuse North Korea in Sony hack - officials. Published time: December 19, 2014 15:42 Screenshot from the film ​The Federal Bureau of Investigation will for the first time on Friday officially weigh in on the colossal computer hack suffered by Sony Pictures that in recent days has been elevated to an issue of national security. 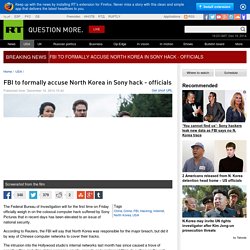 According to Reuters, the FBI will say that North Korea was responsible for the major breach, but did it by way of Chinese computer networks to cover their tracks. The intrusion into the Hollywood studio’s internal networks last month has since caused a trove of sensitive files, including stolen company emails, records and unreleased films, to surface on the web.

Earlier this week, Sony announced that it would be cancelling plans to release “The Interview” next week, a comedy in which North Korea President Kim Jong Un is assassinated, following threats perpetrated by the purported hackers. Previously, Rep. At least six killed in Pennsylvania shootings, suspect still at large. Published time: December 15, 2014 14:34 Edited time: December 15, 2014 19:33 Video still Authorities are searching for a gunman suspected of killing at least six people at three separate locations in Pennsylvania's Montgomery County early Monday. 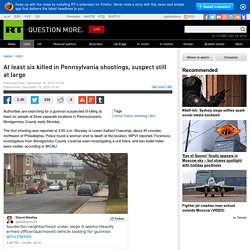 The first shooting was reported at 3:55 a.m. Monday in Lower Salford Township, about 45 minutes northwest of Philadelphia. Police found a woman shot to death at the location, WPVI reported. Half an hour later, at 4:25 a.m., police were called to a shooting in Lansdale, where they discovered two more people who had been shot and killed. Not-so-magnificent 7: Nations named & shamed in CIA torture report. Published time: December 11, 2014 14:49 AFP Photo/Saul Loeb Fifty-four countries were named in the Senate report into US terror activities around the world. 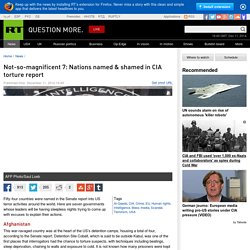 Here are seven governments whose leaders will be having sleepless nights trying to come up with excuses to explain their actions. Afghanistan This war-ravaged country was at the heart of the US’s detention camps, housing a total of four, according to the Senate report. The news was met with anger by Afghan President Ashraf Ghani, who said the report “violates all accepted norms of human rights in the world.” Italy Though it did not house any detention facilities likes its eastern European neighbors, however, Italy was guilty of transporting suspects for torture in third countries. In a rare case, those involved in the kidnapping were prosecuted by an Italian court. Dozens arrested as NYC protests Eric Garner decision. 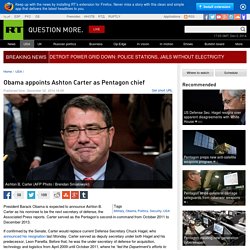 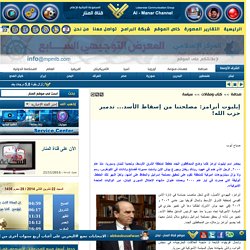 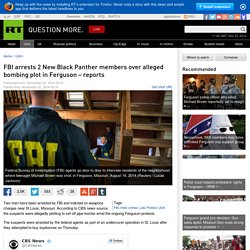 (Reuters / Lucas Jackson) Two men have been arrested by FBI and indicted on weapons charges near St.Louis, Missouri. According to CBS news source the suspects were allegedly plotting to set off pipe bombs amid the ongoing Ferguson protests. The suspects were arrested by the federal agents as part of an undercover operation in St. Meanwhile, St. Obama secretly extends US combat operation in Afghanistan. Published time: November 22, 2014 03:02 Edited time: November 22, 2014 03:36 U.S. 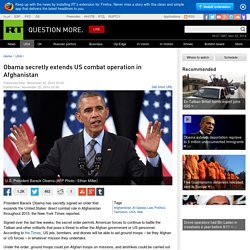 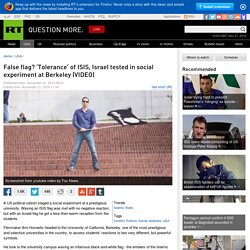 Waving an ISIS flag was met with no negative reaction, but with an Israeli flag he got a less-than-warm reception from the students. Filmmaker Ami Horowitz headed to the University of California, Berkeley, one of the most prestigious and selective universities in the country, to assess students’ reactions to two very different, but powerful symbols. He took to the university campus waving an infamous black-and-white flag - the emblem of the Islamic State (IS, formerly known as ISIS/ISIL). Kerry to Lavrov: Ignore Obama’s naming of Russia on top threats list. Obama in Wisconsin: ‘You can only vote once. This isn’t Chicago’ (VIDEO) Top 10 ways Barack Obama has muzzled American media. Two dead from high school shooting in Washington state. Published time: October 24, 2014 18:08 Edited time: October 24, 2014 19:51 Screenshot from AP video Two students at a Washington state high school are reportedly dead after one of them opened fire early Friday.

US: Some of Our Allies Want Talks with Iran to Fail. The chief US nuclear negotiator acknowledged that certain Washington’s allies and members of Congress are opposed to a final nuclear deal between Iran and the P5+1 group of world powers. "Some worry that it will fail. Others seem to fear that it will succeed. Brooklyn man freed after serving 29yrs for false murder conviction. Published time: October 16, 2014 00:23 Edited time: October 16, 2014 04:54 David McCallum exits Brooklyn Supreme Court with family members after his conviction was overturned in the Brooklyn Borough of New York October 15, 2014 (Reuters / Brendan McDermid) Coerced by police into a murder confession as a teenager, Brooklyn man David McCallum was finally released today after serving 29 years behind bars.

McCallum sobbed in court when his murder conviction was vacated on Wednesday, his head down on the Brooklyn Supreme Court defense table, according to New York Daily News. 80 people were in contact with Dallas Ebola patient – NBC cites health officials. Published time: October 02, 2014 12:01 Edited time: October 02, 2014 12:38 General view of Texas Health Presbyterian Hospital in Dallas, Texas October 1, 2014. (Reuters) The Dallas Ebola patient had come into contact with as many as 80 people, according to Texas health officials, NBC News reports.

This figure is significantly higher than initially thought. Previously Texas officials said 18 people, including five children, had connections to the Dallas Ebola patient, according to local media. First US Ebola patient was in contact with schoolchildren now being monitored - Texas governor. Published time: October 01, 2014 17:03 Edited time: October 01, 2014 17:39 Rick Perry, Governor of Texas (Reuters / Ruben Sprich) ​Texas Gov. Rick Perry has confirmed that the first US diagnosed Ebola patient, who is now in serious but stable condition in Dallas, had contact with children before he showed symptoms of the virus. At a Wednesday news-conference, Texas officials and doctors said they do not believe the children have contracted the virus, but all involved will be monitored for any signs of infection. Obama’s ‘helplessness’ an act: Snowden reveals scale of US aid to Israel. ‘Here are the missiles!’ US Congress passes emergency funding for Israel's Iron Dome.