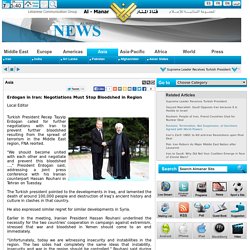 "We should become united with each other and negotiate and prevent this bloodshed …," President Erdogan said, addressing a joint press conference with his Iranian counterpart Hassan Rouhani in Tehran on Tuesday. The Turkish president pointed to the developments in Iraq, and lamented the death of around 100,000 people and destruction of Iraq's ancient history and culture in clashes in that country. Kurdish rallies in Turkey turn bloody, up to 14 killed (PHOTOS, VIDEO) Turkey’s PM Erdogan wins presidential election with 52% - early results. Published time: August 10, 2014 17:29 Edited time: August 11, 2014 02:24 Turkey's Prime Minister and presidential candidate Tayyip Erdogan (Reuters / Umit Bektas) Turkish Prime Minister Recep Tayyip Erdogan has won the presidential election with 52 percent of the vote, according to early results. 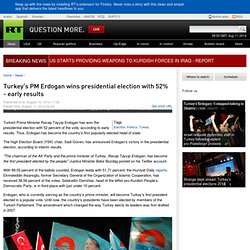 Ankara rebukes Israel as a threat to international peace - POLITICS. Turkey excoriates Israel over its continued attacks on Gaza, declaring the country to be a grave threat to peace in the world Turkish leaders have strongly condemned an Israeli ground operation into Gaza that has killed scores of civilians, declaring the Israeli administration a “threat to international peace.” 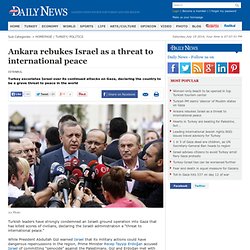 While President Abdullah Gül warned Israel that its military actions could have dangerous repercussions in the region, Prime Minister Recep Tayyip Erdoğan accused Israel of committing “genocide” against the Palestinians. Gül and Erdoğan met with visiting Palestinian President Mahmoud Abbas to discuss the developments in the wake of Israeli aggression. "Particularly, this noncompliant aggression of Israel is spreading the seeds of hate throughout the whole world, not just in Palestine," Gül said July 16, "Israeli attacks have come to a very dangerous phase. I want to warn Israel once more. Turkish PM Erdoğan talks to Palestinian leaders - DIPLOMACY. Smoke billows from buildings after an Israeli air strike in Gaza City on July 10, 2014. 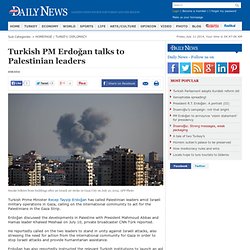 AFP Photo Turkish Prime Minister Recep Tayyip Erdoğan has called Palestinian leaders amid Israeli military operations in Gaza, calling on the international community to act for the Palestinians in the Gaza Strip. Erdoğan discussed the developments in Palestine with President Mahmoud Abbas and Hamas leader Khaleed Meshaal on July 10, private broadcaster CNN Türk reported. He reportedly called on the two leaders to stand in unity against Israeli attacks, also stressing the need for action from the international community for Gaza in order to stop Israeli attacks and provide humanitarian assistance. VIDEO: Footage shows moments preceding kick by PM’s adviser to protester in Soma - LOCAL. Footage has been released by Turkish broadcaster A Haber showing the tense moments in disaster-struck Soma on the day Prime Minister Recep Tayyip Erdoğan visited the town, immediately prior to adviser Yusuf Yerkel’s attack against a mourner. 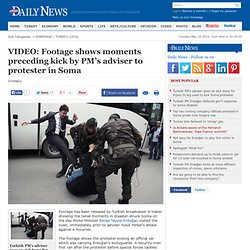 The footage shows the protester kicking an official car which was carrying Erdoğan’s bodyguards. A security man first ran after the protester before special forces tackled the man. At that moment, Yerkel appeared and ran at the protester, kicking him three or four times. Daily Radikal reported on May 19 that Yerkel obtained a medical report allowing him to miss work for seven days due to injuries sustained to his leg in the process of kicking the mourner.

Turkish PM’s aide granted sick leave for ‘trauma’ after kicking mine tragedy mourner. Technicians warned shift supervisor over poor state of electrical cables - LOCAL. A body of miner is carried to an ambulance in Soma, a district in Turkey's western province of Manisa, late May 16. 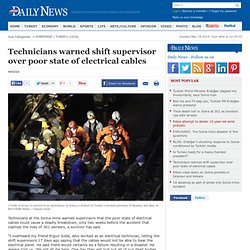 REUTERS Photo / Osman Orsal Technicians at the Soma mine warned supervisors that the poor state of electrical cables could cause a deadly breakdown, only two weeks before the accident that claimed the lives of 301 workers, a survivor has said. “I overheard my friend Ergun Sidal, who worked as an electrical technician, telling the shift supervisors 17 days ago saying that the cables would not be able to bear the electrical panel. He said there would certainly be a failure resulting in a disaster. He always told us, ‘We will all die here. Dinçer’s account comes as evidence grows that the company operating the mine ignored repeated safety warnings. 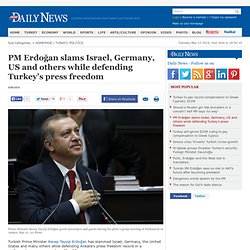 AA Photo Turkish Prime Minister Recep Tayyip Erdoğan has slammed Israel, Germany, the United States and many others while defending Ankara’s press freedom record in a parliamentary group speech on May 13. “Those who say that there is no press freedom in Turkey should just take a look at the headlines of the daily newspapers,” Erdoğan said in his address to deputies of the ruling Justice and Development Party (AKP), arguing that “a significant number of the 40 daily newspapers insult the government systematically.” 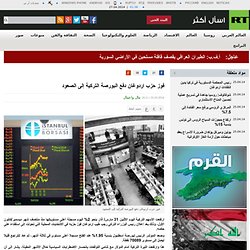 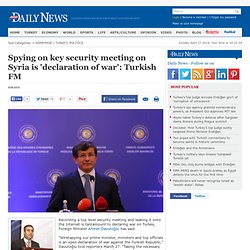 “Wiretapping our prime minister, ministers and top officials is an open declaration of war against the Turkish Republic,” Davutoğlu told reporters March 27. “Taking the necessary precautions is the state’s duty.” His remarks came hours after an illegal recording of a secret security meeting held at the Foreign Ministry was published on YouTube. Huge rally in Istanbul in support of Erdogan — RT In vision. Turkey shuts off YouTube after 'Syria invasion plan' leak. Remembering Berkin Elvan: A wake-up call for Tayyip Erdogan? — RT Op-Edge. Dr. 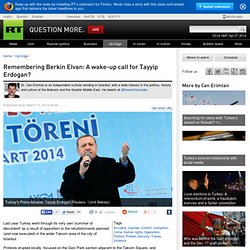 Can Erimtan is an independent scholar residing in İstanbul, with a wide interest in the politics, history and culture of the Balkans and the Greater Middle East. He tweets at @theerimtanangle Published time: March 17, 2014 09:49 Turkey's Prime Minister Tayyip Erdogan. (Reuters / Umit Bektas) Last year Turkey went through its very own 'summer of discontent' as a result of opposition to the refurbishments planned (and now executed) in the wider Taksim area of the city of Istanbul.