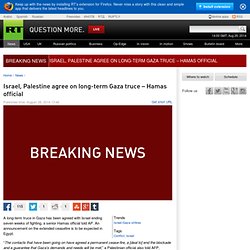 An announcement on the extended ceasefire is to be expected in Egypt. “The contacts that have been going on have agreed a permanent cease-fire, a [deal to] end the blockade and a guarantee that Gaza's demands and needs will be met,” a Palestinian official also told AFP, speaking on condition of anonymity. Israel has so far declined to comment on the report. However, a spokesman for a group called the Palestinian Popular Resistance Committees – which has been responsible for directing rockets into Israel – told Reuters that Egypt could be announcing the news within two hours.

Earlier, Hamas' deputy leader in Cairo, Moussa Abu Marzoul, told Haaretz: “The negotiations have ended and we have reached understandings that underscore the steadfast stance of the Palestinian people with the victory of the resistance.” Mashaal: “Peace Talks” Futile, Gaza Steadfastness Disrupted Zionist Plans. Politburo Chief of the Palestinian Resistance Hamas Movement, Khalid Mashaal, described revival of the so-called Palestinian-Israeli ‘peace talks’ as futile for the Palestinian nation as Tel Aviv is resolved not to grant any concession to the Palestinians. 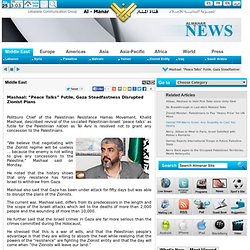 "We believe that negotiating with the Zionist regime will be useless … because the enemy is not willing to give any concessions to the Palestine," Mashaal said on Monday. He noted that the history shows that only resistance has forced Israel to withdraw from Gaza. Mashaal also said that Gaza has been under attack for fifty days but was able to disrupt the plans of the Zionists. The current war, Mashaal said, differs from its predecessors in the length and the scope of the Israeli attacks which led to the deaths of more than 2,000 people and the wounding of more than 10,000. He further said that the Israeli crimes in Gaza are far more serious than the crimes committed during the Holocaust. 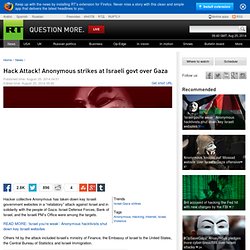 Israel Defense Forces, Bank of Israel, and the Israeli PM’s Office were among the targets. READ MORE: ‘Israel you’re weak’: Anonymous hacktivists shut down key Israeli websites Others hit by the attack included Israeli’s ministry of Finance, the Embassy of Israel to the United States, the Central Bureau of Statistics and Israeli Immigration. Many of the websites were still down at the time of writing.

Canada’s Green Party president resigns after defending Israel. Online petition urges ‘Nuremberg for Israel’ over ‘genocide of Palestinians’ Published time: August 06, 2014 01:46 People hold a banner in solidarity with Palestinian people during a protest at the Pantheon in Rome. 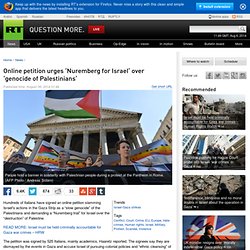 (AFP Photo / Andreas Solaro) Hundreds of Italians have signed an online petition slamming Israel's actions in the Gaza Strip as a “slow genocide” of the Palestinians and demanding a “Nuremberg trial” for Israel over the “destruction” of Palestine. READ MORE: Israel must be held criminally accountable for Gaza war crimes – HRW The petition was signed by 525 Italians, mainly academics, Haaretz reported. The document calls for Israel to face an international tribunal, a Nuremberg-like trial, for its war crimes and the “slow genocide” of the Palestinian people. UK minister resigns over ‘morally indefensible’ Gaza policy — RT UK. Published time: August 05, 2014 08:28 Edited time: August 05, 2014 10:55 UK Foreign Office minister Baroness Sayeeda Warsi (AFP Photo) UK Foreign Office minister Baroness Sayeeda Warsi has resigned from government, saying she can "no longer support" its policy on Gaza. 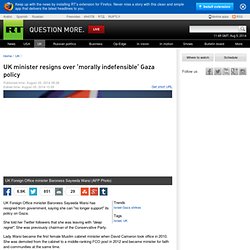 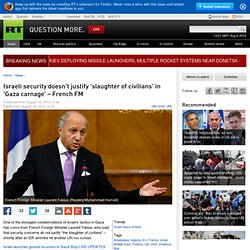 Israel launches ground incursion in Gaza Strip LIVE UPDATES As Fabius was making his remarks Monday on Sunday’s attack, Israel destroyed a house in a Gaza City refugee camp, killing an eight-year-old girl and wounding 29 other people. This was immediately taken by the Palestinians as a violation of Monday’s seven-hour ceasefire. Hundreds attend flash mob in Vienna against Israeli offensive. Published time: August 04, 2014 09:23 Photo from Facebook page Pro-Palestinian activists in Vienna, Austria, have staged a flash mob in the city center in the form of a theatrical performance devoted to the victims of Israeli operation in the Gaza Strip. 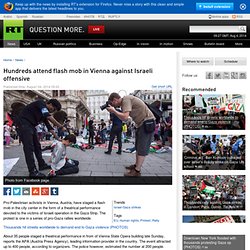 The protest is one in a series of pro-Gaza rallies worldwide. Thousands hit streets worldwide to demand end to Gaza violence (PHOTOS) About 35 people staged a theatrical performance in from of Vienna State Opera building late Sunday, reports the APA (Austria Press Agency), leading information provider in the country. The flash mob was launched by the Facebook community ‘Austrian activists for Palestine’. The activists staged a performance, as seen on the photos posted on Facebook by the group. Pic of Gaza 6yo dressed up as journalist takes Twitter by storm. 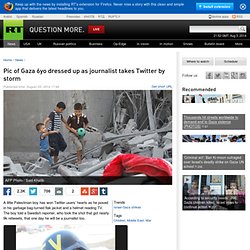 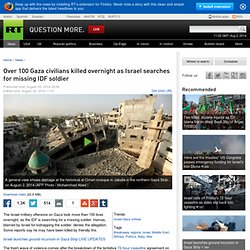 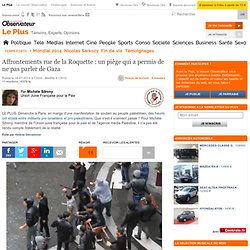 Sayyed Nasrallah Hails Steadfastness of Gazans in Phone call with Meshaal, Shallah. Hezbollah Secretary General Sayyed Hasan Nasrallah hailed on Sunday the steadfastness of Palestinian resistance fighters, vowing to stand by the resistance and people of Gaza. In a phone call with Hamas chief Khaled Meshaal, Sayyed Nasrallah said Hezbollah and the Lebanese resistance will support the Palestinian Intifada and resistance, with all their hearts, willpower, hope, and destiny. His eminence praised the persistence of the Hamas resistance and the tremendous patience of the people of Gaza and strongly supported their rightful demands to end the current battle. Venezuela condemns Israeli invasion of Gaza. Venezuelan President Nicolas Maduro has condemned Israel’s invasion of the Gaza Strip, saying the Tel Aviv regime is committing genocide against the Palestinians. Maduro made the remarks on Sunday, comparing the Israeli invasion of the besieged Gaza Strip to an “extermination.”

In addition, Maduro said the Israeli actions against Gaza could not be justified as like-for-like warfare. “Venezuela also rejects the cynical campaigns trying to condemn both parties equally, when it is clear you cannot morally compare occupied and massacred Palestine with the occupying state, Israel, which also possesses military superiority and acts on the margins of international law,” said Maduro. The Venezuelan president has called for an emergency meeting of the United Nations Human Rights Council to condemn the Israeli regime for its atrocities and policy of genocide against the Palestinian population in Gaza. Et si Israël était ailleurs ? Comparez avec 15 autres pays célèbres. UN spokesman bursts into tears over deaths of Palestinian children. Zionist Entity Launches Gaza Offensive, Resistance Vows “Surprising” Response. Israeli occupation forces were launching dozens of raids against the besieged strip of Gaza, as the Palestinian resistance said that the Zionist entity has crossed the red line, vowing that the retaliation will be surprising.

At least 17 people were injured and several houses were targeted in the raids on the southern Gaza Strip, notably in Khan Yunes, as Israeli air forces were launching an air operation code-named “Protective Edge”. For its part, the military wing of the Palestinian resistance movement, Ezzedine al-Qassam Brigades warned that the Zionist entity has "crossed a red line by attacking houses". "If this policy does not stop we will respond by enlarging the radius of our targets to the point where the enemy will be surprised," it said in a statement. "About 50 objects were targeted including four houses of activists, rocket launch sites and infrastructure," an Israeli army spokesman said. Al-Qassam Brigades issued a statement, claiming responsibility for the rockets.

" كيري: الولايات المتحدة تؤيد حق إسرائيل في الدفاع عن نفسها. Twitter uproar over pic of 'applauding' Israelis watching night attacks on Gaza. Danon: Loss of Battle in Gaza Ended Netanyahu’s Political Future. Israel readies 'ground assault' on Gaza, calls up 40,000 reservists. Published time: July 08, 2014 12:47 Edited time: July 08, 2014 13:40 An Israeli soldier stands atop a tank outside the central Gaza Strip July 8, 2014 (Reuters / Baz Ratner) Israel’s army is formulating a number of options to eradicate rocket fire coming from Gaza, “including ground assault,” an anonymous Israeli official stated on Tuesday. “The army is preparing for all possible scenarios, including an invasion or a ground operation,” the official told the AFP agency. Israeli Defense Minister Moshe Ya'alon said on Tuesday: “We are preparing for action against Hamas, which will not end within a few days,” according to RT’s Paula Slier from the Israeli/Gaza border area.

Synagogue de la Roquette : manipulation médiatique ou médias manipulés. ...شمخاني يؤكد لمشعل دعم ايران. Israeli Soldier in Hands of Al-Qassam Brigades. Ezzedine al-Qassam Brigades, the military wing of the Islamic Resistance Movement, announced on Sunday they had abducted an Israeli soldier in Gaza. "The Israeli soldier Shaul Aaron is in the hands of the Qassam Brigades," a spokesman using the nom-de-guerre Abu Obeida said in a televised address, as he announced that the soldier’s military number was 6092065. The Brigades’ spokesman said that the Zionist enemy was not honest while talking about the number of the killed soldiers during the Israeli ground assault in Gaza.