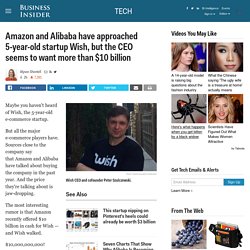 Maybe you haven't heard of Wish, the 5-year-old e-commerce startup. But all the major e-commerce players have. Sources close to the company say that Amazon and Alibaba have talked about buying the company in the past year. And the price they're talking about is jaw-dropping. The most interesting rumor is that Amazon recently offered $10 billion in cash for Wish — and Wish walked. Life with the Dash button: good design for Amazon, bad for everyone else. On a sunny Saturday morning, seven Amazon Dash buttons arrived to my apartment.

Apple becoming a bank? Don't count on it. Why then, is the banking sector, with its dreadful customer service ratings, scarred reputations, and general aura of unpopularity, still dominated by the same old names, then? 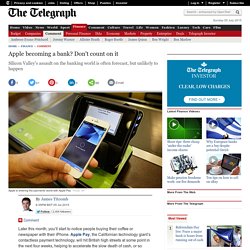 Can’t some whizzkid in a bedroom in California undercut HSBC or JPMorgan, leading them to fade into obscurity along with Comet and the phone book? Consumers would like to see it, apparently. A survey in America of millennials – those in their 20s and early 30s who are seen as the early adopters of new products and services –said last year that banking was more at risk of disruption than any other industry. Almost three in four – 73pc – said they would be more excited about a financial services product from a major technology company than one from their bank. Pinterest makes buyable pins available on iOS for US users. At the beginning of this month, Pinterest announced the debut of its Buyable Pins program, an easy and safe way to purchase products via the service. 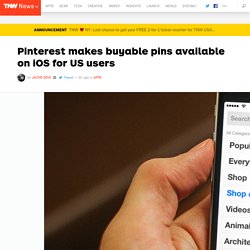 Today, according to a blog post by Michael Yamartino, Pinterest’s Head of Commerce, the program is now in place. It’s rolling out to US pinners on the iPhone and iPad throughout the coming weeks. Android and desktop Pinners will have to wait for an unspecified time. If you received an email regarding the program, then your account is set up for purchasing. Square Adds Payroll To Its Ever-Expanding Offerings For Small Businesses. Ant Financial valued at $45bn after fundraising. Google's Chief Business Officer, Omid Kordestani, Discusses The Company's Future, Imminent "Buy" Button. Look out, Etsy – Amazon's gearing up to launch a rival site. Online crafts marketplace Etsy may have a battle on its hands after it emerged Amazon is prepping a similar site, called Handmade. 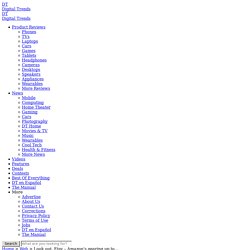 It’s not known when the e-commerce giant hopes to have the rival service up and running, though the signs are that it could be soon as it’s already been contacting existing Etsy members about its plans, the Wall Street Journal reported recently. The invitation email, which offers Etsy artisans a “first peek” at Handmade, directs recipients to a form that asks them about which category their primary product falls into. Related: Amazon’s Dash buttons turn your house into a store. These Free, Throwaway Wristbands Have All The Payment Magic Of The Apple Watch. Amazon VP: 'Anyone working on NFC is focusing on last century's problem'

Patrick Gauthier has been on the job for only five months, but Amazon's vice president of payments already has a lot to say. 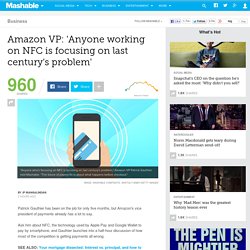 Ask him about NFC, the technology used by Apple Pay and Google Wallet to pay by smartphone, and Gauthier launches into a half-hour discussion of how most of the competition is getting payments all wrong. "I think the industry in general has lost sight of what it is we're here to do," Gauthier told Mashable Friday afternoon. When credit cards initially became popular, they were a huge step forward for consumers, who previously relied on cash and check.

NFC, Gauthier argued, doesn’t offer the same leap in innovation that the credit card did. After all, is paying with your phone exponentially easier than whipping out a credit card?

Where Did My Shopping Mall Go? By Rafi Syed && Jeremy Levine, Bessemer Ventures Partners. Internet marketplace businesses (ranging from Craigslist to eBay to Airbnb, among many others) earn fees for connecting buyers and sellers. 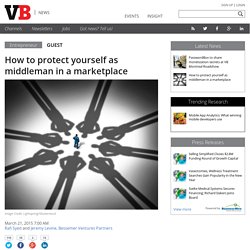 Most early Internet marketplaces like Craigslist were simple listing services, but more compelling transactional and end-to-end models are emerging, and we expect them to dominate over time. Amazon Will Shut Down Amazon Webstore Software Business. Amazon has started telling online merchants that it plans to shut down its Amazon Webstore business, which helps small and midsize retailers create and run their own online shop, according to sources. 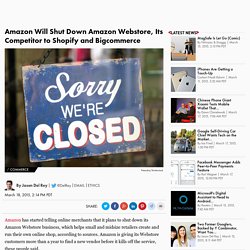 Amazon is giving its Webstore customers more than a year to find a new vendor before it kills off the service, these people said. The e-commerce software business focused on small and midsize businesses has become more competitive in recent years as young companies such as Shopify and Bigcommerce have raised gobs of venture capital to expand their tool sets and attract more customers.

Last summer, eBay announced plans to discontinue its Magento Go software offering for small online shops and recommended they move their business over to Bigcommerce. The news has also started to spread on message boards for Amazon sellers. Amazon’s Apple Watch App Will Let You Shop From Your Wrist. Though online retailer Amazon wasn’t among one of the many applications Apple introduced this week as coming soon to its new wearable device, the Apple Watch, the company does have an Apple Watch version of its mobile shopping app in the works, we understand. 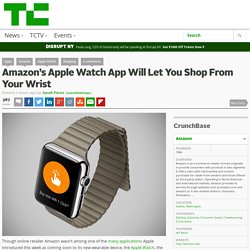 The shopping app will allow consumers to search for products and even buy them from their wrist using Amazon’s 1-Click ordering system. Of course, it’s not surprising that Amazon will address the forthcoming mobile platform – after all, the company tends to release a version of its shopping app on almost any viable mobile or connected platform, not just its own Kindle hardware. And it already has an Android Wear (i.e., smartwatch) version of its shopping app in the wild, so it makes sense that it would build the Apple Watch counterpart, too.

In fact, our understanding is that the Apple Watch version of the Amazon shopping app will operate just like the current Amazon app for Android Wear. (Note: Above image is a mock-up.) Shyp might be about to change the way we shop online. In theory, shopping online couldn’t be easier. 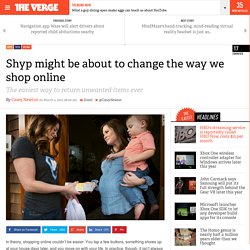 You tap a few buttons, something shows up at your house days later, and you move on with your life. In practice, though, it isn’t always that easy — especially when you’re shopping for clothes. The fit isn’t right, or the color isn’t what you expected, or it turns out you look ridiculous in corduroy. Swyp Is Another Gadget That Wants To Be The Only Card In Your Wallet. Google lets you buy concert tickets directly from search results.

This is the latest attempt by Google to keep users of its search engine on its results pages for longer, so that it can deliver more advertisements to them. Over the past few years, Google has added a whole range of 'rich snippets' to its search results, including answers to questions, results of equations, cinema viewing times, Wikipedia extracts and more. Searching for musical artists on Google already brings up wide range of information including images, discography and biography details, as well as links to various online profiles and digital music sites. The new feature could also benefit events organisers and artists by making the process of buying tickets more seamless. Ticketfly claims that up to 40 per cent of live event tickets currently go unsold.

The news comes after the latest data from web analytics firm StatCounter revealed that Google’s share of the US search market dropped to 75.2 per cent in December – its lowest share since 2008. Tesco launches app for Google Glass. Alternatively, if they are in the bathroom and realise they have run out of toilet paper, they can use voice search to find their favourite brand and add it to their list. “At Tesco we want to ensure we have the means in place to allow customers to shop whenever, however they want which is why we’re testing the possibilities of customers topping up their online basket with Glass," said Pablo Coberly, innovation engineer at Tesco Labs.

Google Glass users can also view the nutritional information and price of food items, and compare them with other brands. Users can then review their basket and complete their order on a computer, tablet or mobile. Jet.com's Marc Lore On Coexisting With Amazon And Why One-Hour Delivery Is Overrated. The Pinterest Pivot. Before Pinterest became social media’s fastest growing website, and landed on the cover of Fast Company, CEO Ben Silbermann set out to transform every cell phone into a clothing retail outlet with an app called Tote.

He didn’t succeed. Designed to change shopping on your phone from being a “pain” to “easy and fun,” according to its Facebook site, Tote connected consumers with dozens of retailers, including Banana Republic, Anthropologie, and American Apparel. The app, launched in 2009 by Silbermann, Paul Sciarra, and Vikram Bhaskaran, let customers save their favorite items, alerted them when clothes went on sale, and pointed them to nearby stores. Prepare for the rebranding of money. Molly Flatt reviews the Guardian Activate London summit.

Paypal, Google and other industry giants are racing to provide new in-store mobile payment solutions. Square Acquires Food Delivery Service Caviar. eBay Launches “eBay Valet,” An iPhone App That Does The Selling For You. Why Pay-Per-Click Ads Are Wasting Your Money. Raj De Datta is CEO and co-founder of BloomReach. Google's Search Engine of the Future. Google is constantly tweaking and evolving its search engine to continue to be relevant on a fast moving and evolving web. The search giant has realized that the user experience is vital and speed of the results and delivering up content that users want includes personalized, recent and unique content.