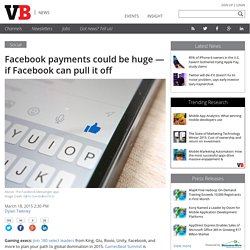 GamesBeat Summit is invite-only -- apply here. Ticket prices increase on April 3rd! If you’re Mark Zuckerberg, you’ve got to be thinking about ways of expanding Facebook’s share of people’s time and attention. Now that the site reaches 65 percent of the American public, and almost 1.4 billion people worldwide, every month, growth can’t just come from getting more people on the platform. Facebook Acquires Online Shopping Curation Site, The Find. Uk.businessinsider. Stripe is operating the payment machinery behind Facebook’s “buy” button. Stripe has always in the business of making digital and mobile commerce for startups easier. 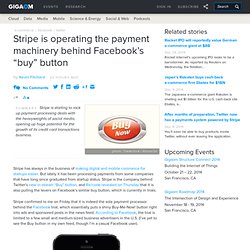 But lately it has been processing payments from some companies that have long since graduated from startup status. Facebook stores fail f-commerce goals by selling not socialising. F-commerce stores are shutting or scaling back their offerings according to Bloomberg. 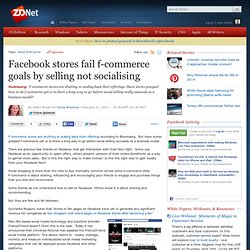 Gamestop has company. Over the past year, Gap Inc., J.C. CEO Dick Costolo Talks About Twitter's Mobile Ad Platform At Economist Conference. At a conference hosted by The Economist Wednesday, Twitter CEO, Dick Costolo puffed out his chest much like like the company's recently modified bird logo as he spoke of Twitter's unique position in the mobile ad game. 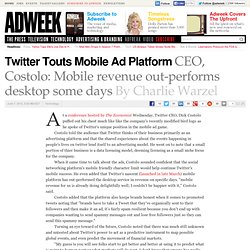 Costolo told the audience that Twitter thinks of their business primarily as an advertising platform and that the shared experiences about the events happening in people's lives on twitter lend itself to an advertising model. He went on to note that a small portion of thier business is a data licensing model, deeming licensing as a small niche focus for the company. When it came time to talk about the ads, Costolo sounded confident that the social networking platform's mobile friendly character limit would help continue Twitter's mobile success.

He even added that Twitter's nascent (launched in late March) mobile platform has out-performed the desktop service in revenue on specific days. Facebook Offers: Why you could soon be buying from your favorite brands in your News Feed. In the past 24 hours, coverage has spread across the Internet of the launch of a new feature by Facebook, one that allows businesses and brands to utilise an ‘Offers’ feature that delivers daily deals to a brand’s Page and a user’s News Feed. 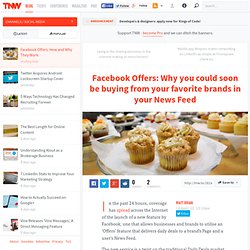 The new service is a twist on the traditional Daily Deals market, particularly because it allows Facebook users to remain in direct control over the offers they see. Elle Tries Facebook Commerce, Launches Shoppable Trend Guide. Elle has launched a shoppable trend guide on Facebook in the latest of several ecommerce initiatives within the magazine industry. 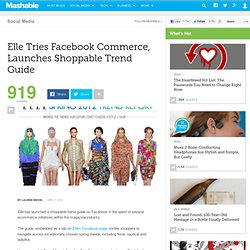 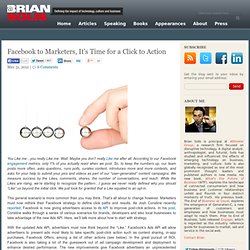 Wait. Maybe you don’t really Like me after all. According to our Facebook engagement metrics, only 1% of you actually react when we post. So, to keep the numbers up, our team posts more often, asks questions, runs polls, curates content, introduces more and more contests, and asks for your help to submit your pics and videos as part of our “user-generated” content campaigns. This general scenario is more common than you may think. With the updated Ads API, advertisers must now think beyond the “Like.” Source: Techcrunch What does “more informed” actually mean? For brands and agencies, advertising based on keywords is no longer good enough. Now advertisers can specifically optimize for… 1. 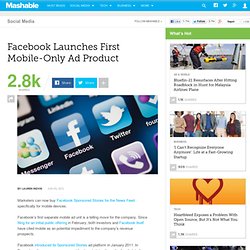 Facebook's first separate mobile ad unit is a telling move for the company. Since filing for an initial public offering in February, both investors and Facebook itself have cited mobile as an potential impediment to the company's revenue prospects. Facebook introduced its Sponsored Stories ad platform in January 2011. In December, the company announced its plans to bring the units directly into the News Feed. Marketers can now buy Sponsored Stories in the News Feed and specify where they would like those advertisements to appear: the desktop, mobile or both. The five options, in full: All placements.

A report that Facebook was considering mobile integration with Sponsored Stories in the News Feed was first published by the Financial Times in February. Facebook Working on New Features... Facebook is gearing up for a huge social commerce push. 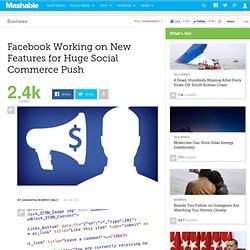 The developer who recently discovered that the social network is testing a "Want" button, which would allow you to add products to a virtual wish list, has found a series of new coding for actions that would allow users to share product purchases, charitable donations or items purchased within Facebook games to profile pages and Timeline. Tom Waddington, a web developer for the site Cut Out + Keep, reached out to Mashable and provided details on the discovery. "The fact the code contains references to 'socialcommerce' is a sign that they're taking it seriously," Waddington said. Facebook wants to be your online bank.

By Lauren Barack FORTUNE -- Someday soon, Facebook users may pay their utility bills, balance their checkbooks, and transfer money at the same time they upload vacation photos to the site for friends to see. 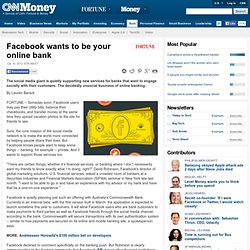