Uber co-founder's new app wants to be your personal shopper. Shopping these days is easy peasy. 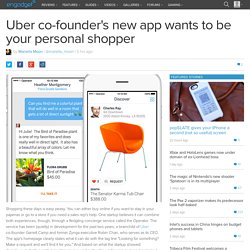 You can either buy online if you want to stay in your pajamas or go to a store if you need a sales rep's help. One startup believes it can combine both experiences, though, through a fledgling concierge service called the Operator. The service has been (quietly) in development for the past two years, a brainchild of Uber co-founder Garrett Camp and former Zynga executive Robin Chan, who serves as its CEO. The app's homepage clearly states what it can do with the tag line "Looking for something? Make a request and we'll find it for you. " Your request will then be sent to an "Operator" aka a sales rep, who will, in turn, send you a description and pictures of a product that matches your description.

With how easy it is to buy goods from big e-commerce websites like Amazon and to look up items on Google first before making an informed purchase, one has to wonder what kind of plan the startup has to drum up interest for the service when it launches. Snapchat is quietly building a research team to do deep learning on images, videos. Top marketing execs: Join us June 1-2 in Boston for GrowthBeat Summit. 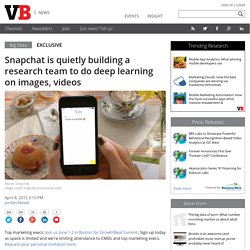 Sign up today as space is limited and we're limiting attendance to CMOs and top marketing execs. Request your personal invitation here. Snapchat, that well-funded Los Angeles startup providing a popular ephemeral-mobile-messaging app, has been slowly developing a research arm to run sophisticated algorithms on user data like images and videos, VentureBeat has learned.

Snapchat is especially interested in a trendy type of artificial intelligence called deep learning, one source told VentureBeat. “They’ll be doing deep learning analysis for images and eventually video (the latter, initially, probably just frame by frame rather than taking into account the full temporal nature of the visual data, and the audio stream),” the source told VentureBeat in an email. A Snapchat spokeswoman declined to comment for this article. Snapchat started in 2011. Snapchat is a photo messaging application developed by four Stanford students. Meet Generation C: The Connected Customer. InShare976 Marketers, educators, parents, it seems that almost anyone in the Generation X or Boomer demographic is scratching their heads trying to figure out Generation Y aka the Millennial. After all, it’s the first generation to seemingly possess digital prowess as part of their DNA. And, it’s the first generation to receive both a birth certificate and a social profile or presence upon delivery into this world.

A study published in 2011 by security company AVG and Research Now surveyed 2,200 mothers from around the world and found that 81% of children under the age of two currently have some type of digital footprint. 92% of U.S. children have an online presence created for them by the time they are 2 years old. In many cases, a digital presence is born before the child, with sonograms (23%) actively published and shared on social networks and blogs. 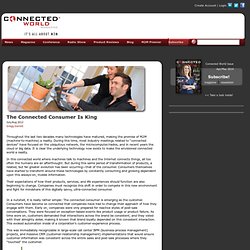 During this time, most industry meetings related to “connected devices” have focused on the ubiquitous network, the microcomputer/radios, and in recent years the cloud or big data. It is clear the underlying technology now exists to make the envisioned connected world a reality. In this connected world where machines talk to machines and the Internet connects things, all too often the humans are an afterthought.

But during this same period of transformation of products, a related, but far greater evolution has been occurring—that of the consumer. Their expectations of how their products, services, and life experiences should function are also beginning to change. In a nutshell, it is really rather simple: The connected consumer is emerging as the customer. The Hyper-Connected Consumer & The Circle of Trust. How to Connect with The Hyper-Connected Consumer The hyper-connected consumer is an increasingly important demographic to the brand marketer. 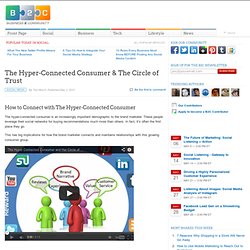 These people leverage their social networks for buying recommendations much more than others. In fact, it’s often the first place they go. This has big implications for how the brand marketer connects and maintains relationships with this growing consumer group. The Converged Media Imperative. In the late 20th century, when the commercial internet was in its infancy, there was no end to the griping about “silos.” Back then silos referred to That Which Is Digital and That Which Is Not Digital. Shut the Front Door! Here Comes Media Convergence.

One of the knottiest topics we’ve been discussing at Altimeter Group lately is the way media are converging. 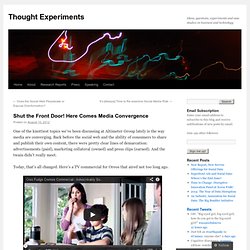 Back before the social web and the ability of consumers to share and publish their own content, there were pretty clear lines of demarcation: advertisements (paid), marketing collateral (owned) and press clips (earned). And the twain didn’t really meet. Today, that’s all changed.