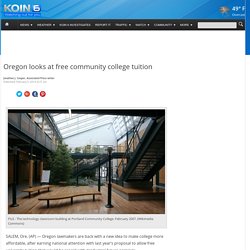 (AP) — Oregon lawmakers are back with a new idea to make college more affordable, after earning national attention with last year’s proposal to allow free university tuition that would be repaid with graduates’ future earnings. A Senate panel on Tuesday backed a measure ordering the state to study whether it’s realistic to allow Oregon high school graduates to attend community colleges for free. “If we get this right, I think we can unleash a tremendous amount of motivation within these young people, giving them the motivation to stay in school, to get a certificate, to achieve that additional learning that can make a difference in terms of their economic success,” Gov. John Kitzhaber told the Senate Education and Workforce Development Committee.

Senate Bill 1524 would order the Higher Education Coordinating Commission to study whether the idea is viable and report back by September. Sen. Copyright 2014 The Associated Press. Reaction to three states' proposals for tuition-free community college. Making community college free has become a hot idea. 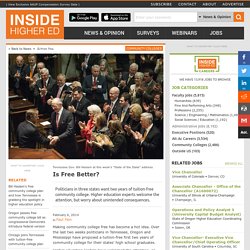 Over the last two weeks politicians in Tennessee, Oregon and Mississippi have proposed a tuition-free first two years of community college for their states’ high school graduates. Higher education leaders have welcomed the attention, as well as possible new pots of money aimed at lower-income students. Terry W. Hartle, senior vice president of the American Council on Education, said the proposal from Tennessee’s governor, Bill Haslam, was "extraordinarily important.

" He said it could be as "potentially far-reaching" as any state-based student access push since the creation of Georgia's HOPE scholarship in the early '90s. However, Hartle and several other experts said the funding proposals raise significant questions. "This is not a minor proposition," Hartle said. More strategic ways of using state support could actually do a better job of helping students who need it the most, some said. Legitimate Goals, and Worries. FINAL%20Embargoed%20Avalanche%20Paper%20130306%20%281%29. How to Attack Your 5 Toughest eLearning Challenges. Keeping employees up-to-date on their organization's newest products, policies, and procedures is critical to remaining competitive, but hiring a trainer to come in and teach a seminar during the workday is costly, disrupts productivity, and may be entirely impractical if a workforce is geographically spread out. 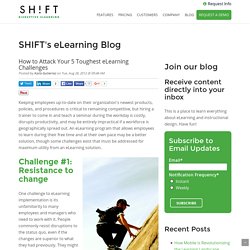 An eLearning program that allows employees to learn during their free time and at their own pace may be a better solution, though some challenges exist that must be addressed for maximum utility from an eLearning solution. Challenge #1: Resistance to change One challenge to eLearning implementation is its unfamiliarity to many employees and managers who need to work with it. People commonly resist disruptions to the status quo, even if the changes are superior to what they had previously. They might not trust that a technology-based learning program will be as effective as interacting with an instructor. Solutions: Challenge #2: Motivation of learners Solutions: Solution: 4 Major Challenges when Implementing an International ELearning Program. Over the years I have been fortunate to implement a variety of elearning programs for both large and small organizations. 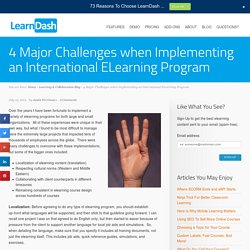 Online Learning in Higher Education. Higher education in the United States, especially the public sector, is increasingly short of resources. 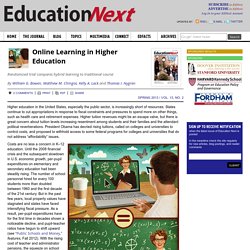 States continue to cut appropriations in response to fiscal constraints and pressures to spend more on other things, such as health care and retirement expenses. Higher tuition revenues might be an escape valve, but there is great concern about tuition levels increasing resentment among students and their families and the attendant political reverberations. President Obama has decried rising tuitions, called on colleges and universities to control costs, and proposed to withhold access to some federal programs for colleges and universities that do not address “affordability” issues. Costs are no less a concern in K–12 education. Until the 2008 financial crisis and the subsequent slowdown in U.S. economic growth, per-pupil expenditures on elementary and secondary education had been steadily rising. From eLearning to mLearning: The Top 5 Challenges beyond Technology. Let’s get one thing out of the way, the future of eLearning isn’t about adding more ‘animations‘ to our existing eLearning (in the name of making courses more engaging), neither is it about an eLearning 2.0 or 3.0 vision. 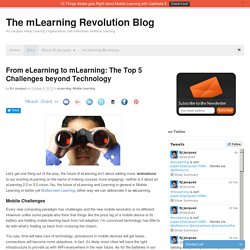 No, the future of eLearning and Learning in general is Mobile Learning or better yet Multiscreen Learning, either way we can abbreviate it as mLearning. Mobile Challenges Every new computing paradigm has challenges and the new mobile revolution is no different. However unlike some people who think that things like the price tag of a mobile device or its battery are holding mobile learning back from full adoption, I’m convinced technology has little to do with what’s holding us back from crossing the chasm. You see, time will take care of technology, processors in mobile devices will get faster, connections will become more ubiquitous, in fact, it’s likely most cities will have the right infrastructure to provide us with WiFi-everywhere in the near future. 1. 2. 3.