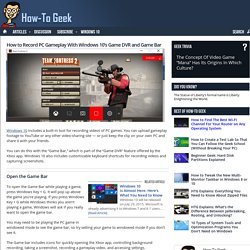 You can upload gameplay footage to YouTube or any other video-sharing site — or just keep the clip on your own PC and share it with your friends. You can do this with the “Game Bar,” which is part of the “Game DVR” feature offered by the Xbox app. Windows 10 also includes customizable keyboard shortcuts for recording videos and capturing screenshots. Open the Game Bar To open the Game Bar while playing a game, press Windows Key + G. How to use an Xbox One Controller on Windows, OS X, and Linux. The Xbox One Controller is a fantastic gamepad, and although Microsoft has only recently started bundled the drivers for it in Windows 10, there are drivers available for Windows 7 and 8 on their website. 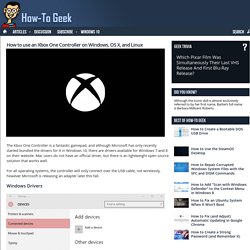 Mac users do not have an official driver, but there is an lightweight open source solution that works well. For all operating systems, the controller will only connect over the USB cable, not wirelessly, however Microsoft is releasing an adapter later this fall. Windows Drivers Windows provides driver downloads on their support page. Be sure to download the correct version (32 bit or 64 bit) for your architecture. You can check if the controller is working in the Devices panel in the settings, under ‘Connected Devices’. Mac Drivers The Mac driver package, called Xone-OSX, is created by FranticRain on Github. Note that your controller will show up in some menus, including in Enjoyable, as an Xbox 360 controller. Linux Drivers. How to Play Wii and GameCube Games on your PC with Dolphin.

Dolphin is an open source Wii and GameCube emulator that supports the majority of games for both consoles. 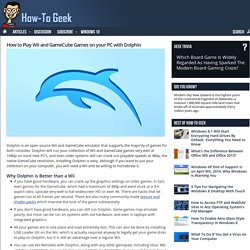 Dolphin will run your collection of Wii and GameCube games very well at 1080p on most new PC’s, and even older systems still can crank out playable speeds at 480p, the native GameCube resolution. Installing Dolphin is easy, although if you want to put your collection on your computer, you will need a Wii and be willing to homebrew it. Why Dolphin is Better than a Wii If you have good hardware, you can crank up the graphics settings on older games. In fact, even games for the GameCube, which had a maximum of 480p and were stuck at a 3:4 aspect ratio, upscale very well to full widescreen HD or even 4K.

Dolphin is not without its problems; there are still games that do not emulate properly and have bugs or glitches, but there is excellent community support in their forums, and new releases come out every few weeks which include bug fixes. Downloading Dolphin Connecting a Controller. 10 Xbox One Features You Might Not Know About. Nine Things Every Steam User Should Know About. How to Stream or Record Your Games for Broadcast Online. How to Move a PC Game to Another Hard Drive (Without Re-Downloading It) The Power User's Guide to Steam's Most Useful Extra Features. TvGameLauncher. RF Generation. The Classic and Modern Gaming Databases. HowLongToBeat.com - How long does it take to beat your favorite games?

Banish Mouse Lag in Video Games With Microsoft's Fix It Tool. Run PC Games at a Higher Resolution Than Your Monitor Supports. Cheap Video Game Shopping, Sales and Deals - Cheap Ass Gamer. IsThereAnyDeal.com. An Xbox One Kinect Dictionary, For When It Just Doesn't Understand You. Uh, no. 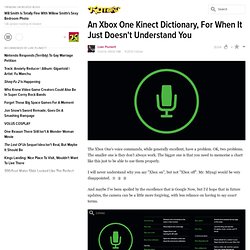 The problem is not that there are new commands and filters. The problem is they didn't augment/improve the system while leaving the simple interface intact—they completely wiped the simple interface, required you to learn syntax to get a search, include absolutely zero help or data on how to do that in Windows directly, only suggest two filters, and half the time search still doesn't fucking work.

Requiring people to learn a full syntax when a simple GUI could do the job is not stepping forward, it's stepping back. I don't want them to strip the features. I just want the syntax and search to actually work as intended, I want actual documentation and useful suggestions (say, Windows tracks the most common types), and I want the simple-to-use search several hundred million people are already comfortable with back in, as there is zero reason the new syntax couldn't simply happen after the user opt to click "advanced".

Read on as we show you how to add any game, application, or emulator to Steam with custom icons and artwork. Why Do I Want to Do This? The Steam client is a really handy way to organize your games and it works for both games you’ve purchased from Steam and games you’ve added from your own collection (e.g. a game you manually installed that isn’t part of the Steam ecosystem). The big hiccup when you do that, however, is that Steam doesn’t automatically apply their lovely icons and artwork to your game; you’re on your own to tinker around and customize the look. This tutorial will guide you through both sides of the process: adding a non-Steam game or application and editing the artwork so that it looks good both in the windowed launcher and in Steam’s Big Picture couch-friendly interface.

Launch your Steam client. Steam Banners. Steam Grids.com - A collection of custom grid icons for Steam, with and without text. S Gateway to the World of Darkness.