Patent Litigation Reform & Its Critics. There are two IP-related bills currently making their way through the US Congress: the PATENT (Protecting American Talent and Entrepreneurship) Act in the Senate and its counterpart in the House, the Innovation Act. 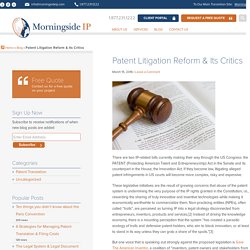 If they become law, litigating alleged patent infringements in US courts will become more complex, risky and expensive. These legislative initiatives are the result of growing concerns that abuse of the patent system is undermining the very purpose of the IP rights granted in the Constitution, i.e., rewarding the sharing of truly innovative and inventive technologies while making it economically worthwhile to commercialize them. But one voice that is speaking out strongly against the proposed legislation is Save The American Inventor, a coalition of “inventors, patent owners and stakeholders from a broad range of industries that believe the [current] patent system is worth protecting”. Opponents of patent litigation reform argue that[1]: Getting Ready For The Unitary Patent. Italy’s decision to join the EU unitary patent has given proponents of the cause hope for wider European adoption. 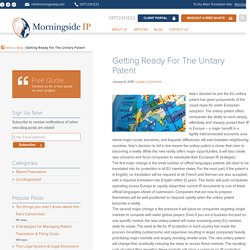 The unitary patent offers companies the ability to more simply, effectively and cheaply protect their IP in Europe – a major benefit in a tightly interconnected economic area where major social, economic, and linguistic differences still exist between neighboring countries. Italy’s decision to fall in line means the unitary patent is closer than ever to becoming a reality. While this new reality offers major opportunities, it will also create new concerns and force companies to reevaluate their European IP strategies. The first major change is the small number of official languages patents will need to be translated into for protection in all EU member states.

For the most part, if the patent is in English, no translation will be required at all. Business Method Patents: Where Clarity Is Key. Patents were initially designed to help innovators maintain a degree of ownership over the technological advances they helped bring to life. 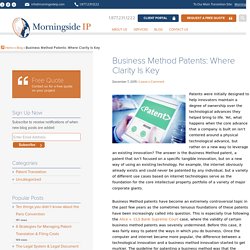 Yet, what happens when the core advance that a company is built on isn’t centered around a physical technological advance, but rather on a new way to leverage an existing innovation? The answer is the Business Method patent, a patent that isn’t focused on a specific tangible innovation, but on a new way of using an existing technology. For example, the internet obviously already exists and could never be patented by any individual, but a variety of different use cases based on internet technologies serve as the foundation for the core intellectual property portfolio of a variety of major corporate giants.

Business Method patents have become an extremely controversial topic in the past few years as the sometimes tenuous foundations of these patents have been increasingly called into question. This is especially true following the Alice v. Are You Ready to Trademark in Cuba? As of December 2014, President Obama has amended the Cuban Asset Control Regulations and Export Administrations Regulations to create better opportunities for trade and business between US and Cuba. 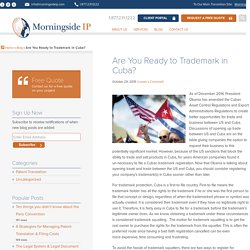 Discussions of opening up trade between US and Cuba are on the table giving companies the option to expand their business to this potentially significant market. However, because of the US sanctions that block the ability to trade and sell products in Cuba, for years American companies found it un-necessary to file a Cuban trademark registration. Now that Obama is talking about opening travel and trade between the US and Cuba, you should consider registering your company’s trademark(s) in Cuba sooner rather than later. For trademark protection, Cuba is a first-to-file country. Patent Translation. In 1996, James Logan applied for a patent for digital audio and visual distributing as he was trying to get his digital audio player off the ground. 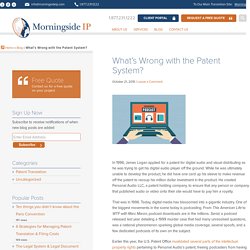 While he was ultimately unable to develop the product, he did have one card up his sleeve to make revenue off the patent to recoup his million dollar investment in the product. He created Personal Audio LLC, a patent holding company, to ensure that any person or company that published audio or video onto their site would have to pay him a royalty. That was in 1996. Today, digital media has blossomed into a gigantic industry. One of the biggest movements in the scene today is podcasting.

Earlier this year, the U.S. There was an Economist article posted earlier this month that showcased some of the faults of our current patent system.