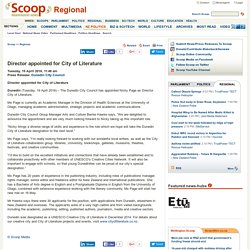 Ms Page is currently an Academic Manager in the Division of Health Sciences at the University of Otago, managing academic administration, strategic projects and academic communications. Dunedin City Council Group Manager Arts and Culture Bernie Hawke says, “We are delighted to announce the appointment and are very much looking forward to Nicky taking up this important role. “Nicky brings a diverse range of skills and experience to the role which we hope will take the Dunedin City of Literature designation to the next level.” 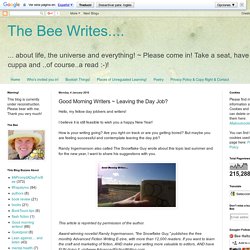 I believe it is still feasible to wish you a happy New Year! How is your writing going? Are you right on track or are you getting bored? But maybe you are feeling successful and contemplate leaving the day job? Randy Ingermanson also called The Snowflake Guy wrote about this topic last summer and for the new year, I want to share his suggestions with you. This article is reprinted by permission of the author. Award-winning novelist Randy Ingermanson, "the Snowflake Guy," publishes the free monthly Advanced Fiction Writing E-zine, with more than 12,000 readers. The Bee Writes....: Good Afternoon Writers! ~ To set goals or not to set goals... How is your writing going? 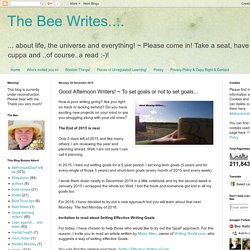 Are you right on track or lacking behind? Do you have exciting new projects on your mind or are you struggling along with your old ones? The End of 2015 is near Only 3 days left of 2015 and like many others, I am reviewing the year and planning ahead. Well, I am not sure I can call it planning. In 2015, I tried out setting goals for a 5 year period: I set long term goals (5 years and for every single of those 5 years) and short-term goals (every month of 2015 and every week). I wrote them down neatly in December 2014 in a little notebook and by the second week in January 2015 I scrapped the whole lot. For 2016, I have decided to try out a new approach but you will learn about that next Monday. Invitation to read about Setting Effective Writing Goals For today, I have chosen to help those who would like to try out the "goal" approach.

The Bee Writes....: Three songs to get you and me writing ~ Good Morning Writers! How is your writing going? 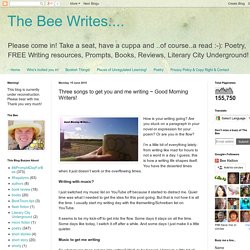 Are you stuck on a paragraph in your novel or expression for your poem? Or are you in the flow? I’m a little bit of everything lately: from writing like mad for hours to not a word in a day. I guess, this is how a writing life shapes itself. You have the deserted times when it just doesn’t work or the overflowing times. Procrastination/Aufschieben. I can not remember in which week of Julia Cameron's "The Artists Way" she was talking about our favourite procrastination. 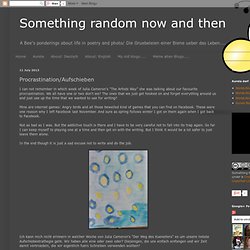 We all have one or two don't we? The ones that we just get hooked on and forget everything around us and just use up the time that we wanted to use for writing? Mine are internet games: Angry birds and all those bewelled kind of games that you can find on Facebook. These were one reason why I left Facebook last November. And sure as spring follows winter I got on them again when I got back to Facebook. Not as bad as I was. In the end though it is just a sad excuse not to write and do the job. Ich kann mich nicht erinnern in welcher Woche von Julia Cameron's "Der Weg des Kuenstlers" es um unsere liebste Aufschiebestrathegie geht.

The New World of Publishing: Making a Living with Your Short Fiction Updated 2013. Way back, over three years ago now, I did a post in my Killing the Sacred Cows of Publishing series called “Myth: You Can’t Make Money Writing Fiction.” 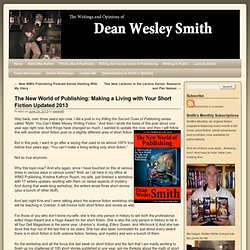 And then I wrote the basis of this post about one year ago right now. And things have changed so much, I wanted to update this now, and then I will follow this with another short fiction post on a slightly different area of short fiction. But in this post, I want to go after a saying that used to be almost 100% true before four years ago. “You can’t make a living writing only short fiction.” Not so true anymore. 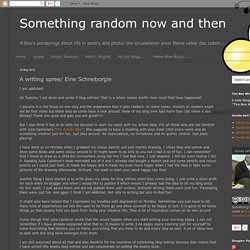 On Tuesday I sat down and wrote 9 blog entries! That is a whole weeks worth! How could that have happened? I assume it is the focus on one blog and the experience that it gets readers. Or more views. But I also think it has to do with my decision to start my week with my artists date.