A Conversation with Garfunkel, Vol. II « American Songwriter 2020. This is Part II of a two-part series. 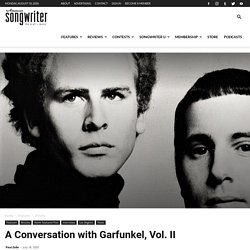 You can read Part I here. AMERICAN SONGWRITER: On the demo Paul made of “Bridge Over Troubled Water” he sings it like you. Your range, your style. It showed that he always wanted you to sing it. He wrote it with your voice in mind. ART GARFUNKEL: Yeah. That shows how much reverence he had for you and your talent. Yes. Also a good choice! [sings] “The long and winding road that leads”- [Laughter] You recorded “Bridge” on both coasts. Garfunkel: On Being Paul Simon's First Champion « American Songwriter 2020.

Not only is he one of this planet’s greatest singers, he’s also one our greatest song champions. 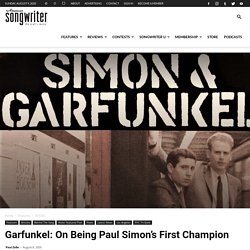 Long before the world had awakened to the ongoing songwriting brilliance of Paul Simon, there was one who was thoroughly aware of this phenomenon before any others. Artie. He knew not only of his friend’s great talent in writing songs, but also his potential to expand the scope of songs as we know them. Since he was a kid, Simon had worked hard at crafting conventional pop-rock songs, always with the hope of scoring a Top 40 hit. The guy didn’t set out to be one of this world’s most ambitiously artistic songwriters.

Simon succeeded at writing a hit song when he was 16. That Simon & Garfunkel elected to be known as Tom & Jerry is funny and ironic for many reasons, not the least of which is that their namesakes were not human, or even the same species as each other. Simon always knew music was his calling, and never spent much time considering other pursuits. Silence like a Cancer Grows: Lockdown Conversation with Garfunkel, Part One. « American Songwriter 2020. Artie’s in lockdown at his Manhattan home, where he lives with his wife. 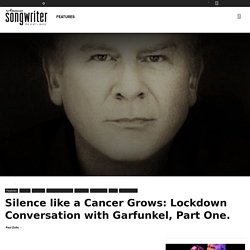 He’s singing “America” a cappella: “Let us be lovers, we’ll marry our fortunes together….” Art Garfunkel Interview-Sept 2018. What Art Garfunkel Wants His Epitaph To Be-Part 3 (2017) In Part 1 and Part 2 in our series of interviews with Art Garfunkel about his new autobiography “What Is It All But Luminous,” we discussed the crooner’s relationship with Paul Simon, the songs Sound of Silence and Mrs. 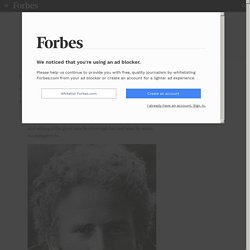 Robinson, performing the soundtrack to The Graduate, Art’s acting in Catch-22 and what he might have been if not a singer, among other things. Here, in this final part, Art chats about the differences in acting and singing, the recording and writing of the great tune Scarborough Fair and what he wants his epitaph to be. Jim Clash: You are a singer first, an actor second. Give us some things you might do as an actor on film versus a musician on tape. Art Garfunkel: When you are a singer, you face the microphone, as an actor you face the camera. Clash: Can you remember being in the studio when you recorded your great song Scarborough Fair? Garfunkel: We were in studio A at Columbia Records on 7th Avenue on New York City.

Art Garfunkel Says He Might Have Been A Teacher - Part 2 (2017) In Part 1 of this interview series with Art Garfunkel, we discussed much about his new autobiography, “What Is It All But Luminous” Here we continue with Part 2 of our chat. 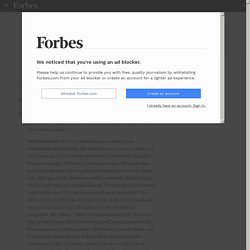 Jim Clash: You mention Paul Simon throughout the book. Art Garfunkel's Unconventional New Autobiography - Part 1 (2017) When you chat with Art Garfunkel, the second half of the iconic Simon & Garfunkel musical duo, he doesn’t seem like the 75-year-old man that he is. 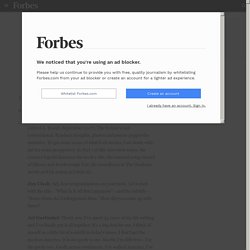 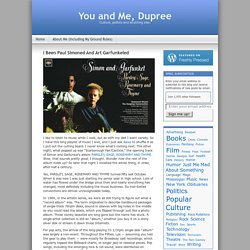 So I have this long playlist of music I love, and I just ask Alexa to shuffle it as I pull out the cutting board. I never know what’s coming next. The other night, what popped up was “Scarborough Fair/Canticle,” the opening track of Simon and Garfunkel’s album PARSLEY, SAGE, ROSEMARY AND THYME. Wow, that sounds pretty good, I thought. Wonder how the rest of the album holds up? Yes, PARSLEY, SAGE, ROSEMARY AND THYME turned fifty last October. In 1966, in the artistic sense, we were all still trying to figure out what a “record album” was. For pop acts, the arrival of the long-playing 33 1/3rpm single-disk “album” was largely a non-event. The altruistic saints of the record companies, always looking for ways to devote their own modest profits toward the greater good, made some calculations as the Lp took hold.

Artie and Paul, about the time they recorded PARSLEY, SAGE. How did I react five decades later? Related. Simon & Garfunkel : Their Famous Friendship, Their Infamous Feud (2019) Art Garfunkel has been in the news lately, telling an interviewer several contradictory stories – that he regrets the breakup with Paul Simon, but also that Paul dominated him. 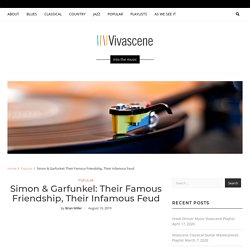 And – that he befriended Simon only because he felt sorry for him due to his slight stature. It wasn’t always the tale that Artie told about the beginning of their famous friendship/partnership. Years ago Artie and Paul were interviewed together. Here’s how it went in that interview, with Artie first telling the story of how they met: “We go back to the 6th grade when we were 11 and met doing Alice In Wonderland. “It is true,” Paul responds. Thus began one of the most famous musical marriages in all of pop history: their songbook continues to be worshipped by millions of fans around the world.

When Paul and Artie went their separate ways in 1970 it was some years before Paul found his footing again; some say that Artie never did.