Angel Clare (1973) 1973 studio album by Art Garfunkel The title, Angel Clare, comes from the name of a character in Thomas Hardy's novel, Tess of the d'Urbervilles. 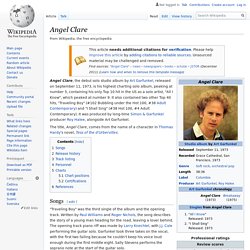 Songs[edit] "Down in the Willow Garden," the second track, was a country classic popularised by singer-songwriter Charlie Monroe, about a young man who kills his lover in the town's willow garden, and the events that follow, from his attempts to hide the body to his father's hypocritical advice and, finally, his own demise.

Paul Simon sang harmony on the final verse and chorus with Garfunkel, along with Jerry Garcia of The Grateful Dead playing lead guitar (overdubbed later by Roy Halee in San Francisco). Garfunkel went on to say it was one of his favourite country songs and loved the ability to work with Simon once again. Breakaway (1975) 1975 studio album by Art Garfunkel In addition to the usual 2-channel stereo version the album was also released by Columbia Records in 1975 in a 4-channel quadraphonic version on LP record and 8-track tape. 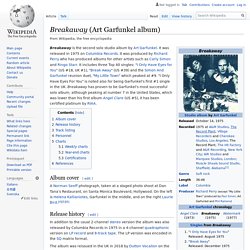 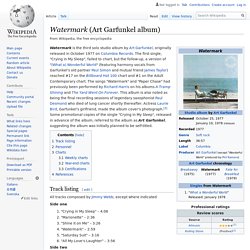 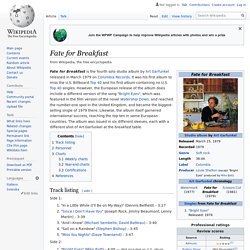 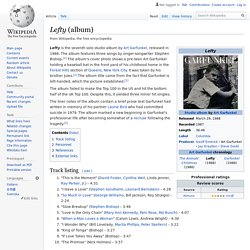 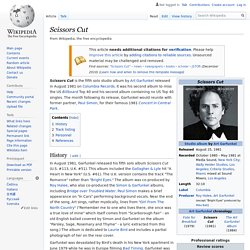 Garfunkel was quoted at the time, "Laurie was the greatest thing I ever knew in my life, now I've lost it. "[2] In 1988, he added, "I took her death terribly and remained moody over it through much of the 80's. " Track listing[edit] Songs from a Parent to a Child (1997) Everything Waits to Be Noticed (2002) 2002 studio album by Art Garfunkel Everything Waits to be Noticed is the ninth solo studio album by Art Garfunkel, although the album is actually a collaboration within a trio setting featuring singer-songwriters Maia Sharp and Buddy Mondlock. 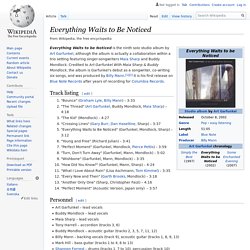 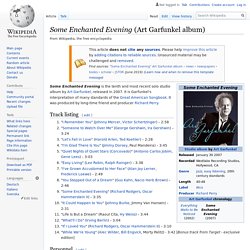 It is Garfunkel's interpretation of many standards of the Great American Songbook. It was produced by long-time friend and producer Richard Perry. Wednesday Morning, 3 A.M. (1964) 1964 studio album by Simon & Garfunkel The album was initially unsuccessful, so Paul Simon moved to London, England and finished his first solo album The Paul Simon Songbook. 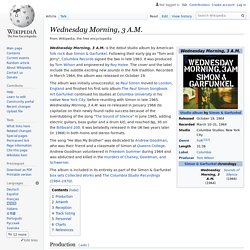 Art Garfunkel continued his studies at Columbia University in his native New York City, before reuniting with Simon in late 1965. Wednesday Morning, 3 A.M. was re-released in January 1966 (to capitalize on their newly found radio success because of the overdubbing of the song "The Sound of Silence" in June 1965, adding electric guitars, bass guitar and a drum kit), and reached No. 30 on the Billboard 200.

It was belatedly released in the UK two years later (in 1968) in both mono and stereo formats. Sounds of Silence (1966) 1966 studio album by Simon & Garfunkel Cover artwork[edit] The album cover photo features the duo on a trail looking back towards the camera. 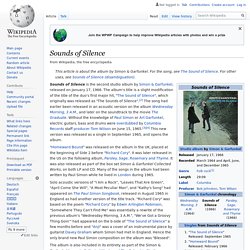 It was shot at Franklin Canyon Park in Los Angeles, California. Parsley, Sage, Rosemary and Thyme (1966) 1966 studio album by Simon & Garfunkel Parsley, Sage, Rosemary and Thyme is the third studio album by American music duo Simon & Garfunkel. Produced by Bob Johnston, the album was released on October 24, 1966 in the United States by Columbia Records. Following the success of their debut single "The Sound of Silence", Simon & Garfunkel regrouped after a time apart while Columbia issued their second album, a rushed collection titled Sounds of Silence.

For their third album, the duo spent almost three months in the studio, for the first time extending a perfectionist nature both in terms of instrumentation and production. The album largely consists of acoustic pieces that were mostly written during Paul Simon's period in England the previous year, including some numbers recycled from his debut solo record, The Paul Simon Songbook.

Bookends (1968) Bridge over Troubled Water (1970) 1970 studio album by Simon & Garfunkel Bridge over Troubled Water was released on January 26, 1970, and several re-releases followed. The album was mixed and released in both stereo and quadraphonic. Columbia Records released a 40th Anniversary Edition on March 8, 2011, which includes two DVDs, including the politically themed TV special Songs of America (1969), the documentary The Harmony Game, additional liner notes and a booklet.

Other reissues contain bonus tracks, such as the 2001 version, which covers the demo tapes of "Feuilles-O" and "Bridge over Troubled Water". Live from New York City, 1967. The Graduate (soundtrack) 1968. Live 1969. 2008 live album by Simon and Garfunkel Live 1969 is the fourth live album by Simon & Garfunkel, is the final project ever released by the duo, and was released through Columbia Records.

It consists of live recordings captured on the duo's final North American tour, prior to the release of their Bridge over Troubled Water album. Fifteen of the album's seventeen tracks are previously unreleased, with the exceptions being the live versions of "For Emily, Whenever I May Find Her" and "Kathy's Song", both of which initially appeared on Simon & Garfunkel's 1972 Greatest Hits album. Live 1969 saw initial release as a Starbucks exclusive on March 25, 2008, preceding a full retail release on April 14, 2009.[1] It was later included as the second disc in the 2-disc 40th Anniversary Edition reissue of Bridge over Troubled Water.