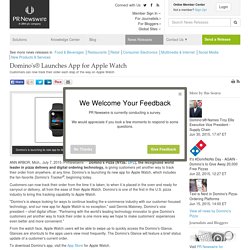 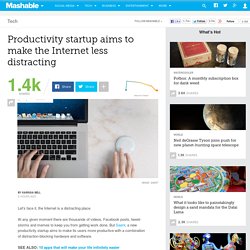 At any given moment there are thousands of videos, Facebook posts, tweet-storms and memes to keep you from getting work done. But Saent, a new productivity startup aims to make its users more productive with a combination of distraction-blocking hardware and software. At a basic level, Saent acts much like other distraction-reducing software. When enabled, the desktop app blocks sites and apps that are identified as "unproductive" in order to encourage short term productivity. But Saent takes this concept a step further with the addition of a physical device. Slightly smaller than a coaster, the hardware component of Saent is a small bluetooth-enabled plastic button. As you complete more focused work sessions, you accumulate points, which are tracked in the app's dashboard. The company is currently crowd-funding Saent's launch through Indiegogo. SimonPorter sur Twitter : "How @Hadoop Keeps Even Small Businesses In the Loop for Big Data #Analytics #smb. 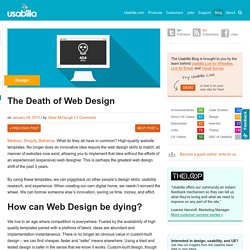 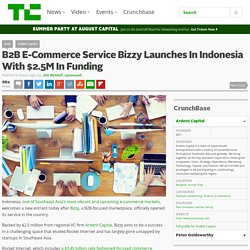 Backed by $2.5 million from regional VC firm Ardent Capital, Bizzy aims to be a success in a challenging space that eluded Rocket Internet and has largely gone untapped by startups in Southeast Asia. Rocket Internet, which includes a $3.45 billion rate fashioned-focused commerce arm among its portfolio of companies, was unable to crack B2B in Southeast Asia. Its OfficeFab venture, which provided office supplies, closed down in 2013 after failing to hit its marker. Even OfficeYes, Rocket Internet’s related venture in India — which absorbed talent and resources from OfficeFab following its shuttering — is in the dead pool. So what is Bizzy doing differently to have a shot at success? Indeed, the site’s front page alone shows battery packs, room spray, and electronics are among the goods on offer. Wearables and IoT sur Twitter : "New Transmitter Designed To Reduce The Power Leakage Of The IoT Devices #IoT #Wearables. CSS Design Awards sur Twitter : "A free guide to learn HTML and CSS by Dan Denney @dandenney. 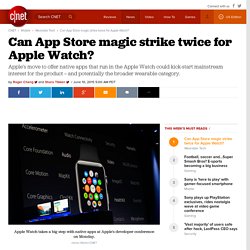 While the original iPhone turned heads when it first debuted in 2007, it didn't become a world-beating mobile device until the following year, when Apple launched its App Store and made it dead-simple for anyone to download games and programs onto their smartphone. The iPhone went from a slick-looking smartphone that could make calls, play music and videos, and browse the Internet to a device that could do virtually anything developers imagined. Apple has ambitions that the same kind of radical transformation will occur with the Apple Watch, which will get access to native applications that can fully take advantage of the wearable device and its capabilities with the next version of its Watch OS software. "For us this is a giant moment," said Apple CEO Tim Cook during the company's annual developer conference on Monday. 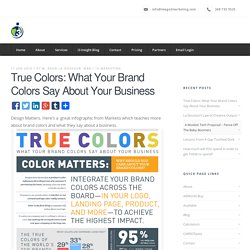 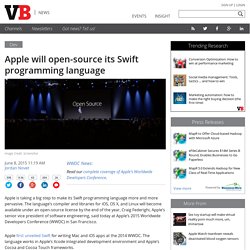 The language’s compiler and libraries for iOS, OS X, and Linux will become available under an open-source license by the end of the year, Craig Federighi, Apple’s senior vice president of software engineering, said today at Apple’s 2015 Worldwide Developers Conference (WWDC) in San Francisco. Apple first unveiled Swift for writing Mac and iOS apps at the 2014 WWDC. The language works in Apple’s Xcode integrated development environment and Apple’s Cocoa and Cocoa Touch frameworks. “We think Swift is the next big programming language, the one that we’ll all be doing application and system programming on for 20 years to come,” Federighi said. “We think Swift should be everywhere and used by everyone.” Moon Technololabs sur Twitter : "Move #money from your wrist with CommBank's new #smart watch #app #moontechnolabs.

Move money from your wrist with CommBank's new smart watch app. If you have ever wanted Siri's dulcet tones advising you when to buy or sell Apple stocks, wait no longer. 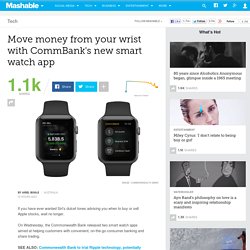 On Wednesday, the Commonwealth Bank released two smart watch apps aimed at helping customers with convenient, on-the-go consumer banking and share trading. Available free on iOS, the Commonwealth Securities (CommSec) Apple Watch app lets users view their share portfolio and watch lists, and even use Siri to get live share prices. To make a trade, however, they'll still need to turn to the CommSec mobile app or bank website, or even, horror, make a phone call. Paul Rayson, executive general manager of CommSec, said in a statement around 25% of logins and 11% of trades now take place on the bank's mobile app, so making a smart watch app for trading is a natural fit for the bank's customers. Moon Technololabs sur Twitter : ""#iOS 9 has a hidden #iCloud Drive #app" #montechnolabs...

Icloud-drive-app-ios-9?utm_content=buffer6df5f&utm_medium=social&utm_source=twitter. Apple's vision for file management on iOS has always been to let things happen behind the scenes with minimal user input, but with iOS 9 the company appears to be making at least a small concession to those who feel more comfortable delving into folders and files themselves. 9to5Mac and MacRumors report that iOS 9 has an optional iCloud Drive app that lets users manage their iCloud files, much like they can on the web or with the Finder on Mac computers. 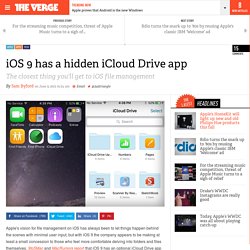 The app is apparently optional and needs to be switched on in Settings before it appears on the home screen, so Apple likely doesn't plan to make it a core part of the iOS experience. But the app could make iCloud Drive a more usable alternative to competing cloud services like Dropbox, giving users a more familiar and traditional way to handle their files and saved data from other apps. Moon Technolabs Pvt ltd on Pinterest. Log in Home Categories There’s more to see... 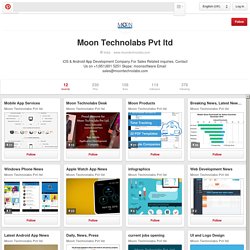 Come and take a look at what else is here! Moon Technololabs sur Twitter : "Tools To Affirm #Mobile-Friendly Status of #Magento e-Store #moontechnolabs. Tools To Affirm Mobile-Friendly Status of Magento e-Store. Why are people ranting and raving about mobile-friendliness and responsive web development? These are the reasons why… Mobile usage will continue to proliferate in the coming years People are hilarious about the new Apple smart watch and in coming days Google glass will also take over market. Darude is making memes a reality by playing TwitchCon 2015. Streaming platform Twitch has announced new details of its upcoming community event TwitchCon, slated for September.

It’s confirmed that EDM producer Darude will be performing at the afterparty. Darude said, “The Twitch community has been really passionate about my music, especially in the way they hype ‘Sandstorm’ in chat and the support they have given my Twitch channel.” TwitchCon will host 40 panels covering everything from building communities on its platform to the legalities around Let’s Play videos and monetizing streams. In addition, 50 of Twitch’s top broadcasters including 2MGoverCsquared, Dansgaming and GiantWaffle will be in attendance. TwitchCon 2015 will be held at the Moscone West convention center in San Francisco on September 25 and 26.

I'll be there with CNET's Shara Tibken and Scott Stein to cover the event so make sure to tune in. Tune into CNET's WWDC live blog at 9:00 a.m. PT Monday, June 8 Historically, WWDC is where Apple announces new software releases, so it is likely we'll hear about Mac OS X, new apps that will run on the Apple Watch and the company's mobile operating system, iOS 9. There have already been several rumors about what we're getting in iOS 9 such as an improved keyboard, more comprehensive searches from Siri, backward compatibility for older devices, and support for Force Touch with haptic feedback likely released with the iPhone 6S.

Nearly two years ago, Google introduced Views, a community where anyone could submit their 360-degree photo spheres to share with the world. There are many neat panoramas there, but they don’t get the mileage they could given the photos are separate from Maps and Street View. This is changing with a new Street View app coming in August, which will allow anyone to submit photo spheres to Maps. Previously, only panoramas made by Google or other contributors would appear on Street View. Meanwhile, existing panoramas from Views will be transferred over to the new experience. The new app will also allow you to upload media directly from 360-degree cameras, starting with the NCTech iris360 and the Giroptic 360cam, with support for others soon thereafter.

This is probably the new Street View icon, as seen on the iris360’s website The company is also making it easier to become one of its certified photographers for businesses. Add Paypal To Contact Form 7 - iEatWebsites. You can add PayPal to contact form 7 in less than five minutes. Moon Technololabs sur Twitter : "Why do #people use #social media? We have the answers #moontechnolabs...

i100.independent.co. Despite there only being a few years between them, those aged 16-24 are likely to have slightly different motivations for using social media platforms than their older counterparts. According to research in Deloitte’s Media Consumer survey, the “propensity of younger age groups to use a social network is affected significantly by the intrusion of strangers or commercial organisations on to that website”.

They Say Bigger is Always Better, But Does Size Really Matter? Bigger phones, bigger tablets, bigger screens – with the arrival of these on the digital scene, any mobile marketers would be forgiven for thinking that size matters when it comes to reaching consumers. When Apple exhibited the finished design of their new iPhone 6 and iPhone 6 Plus last year, the world stopped to watch, and gasped.

Not only a bigger phone but a display 28% bigger than its predecessor – what could it mean for mobile? Adblock Plus launches an Android browser that does what it says on the box. For years, desktop users have sworn by Adblock Plus (ABP), the efficient browser extension for hiding Web ads, and the service is finally making its way to mobile. ABP’s developers have launched Adblock Browser for Android, which is basically Firefox 37 for Android with ABP baked in.

The app is currently in beta, and you’ll need to sign up to ABP’s Google+ community to download it. Moon invoice App For small Organisation, Moontechnolabs App. How Google Jump could push VR into the mainstream. Moon Technololabs (@moontechnolabs)

Moon Technolabsbusiness-height by moontechnolabs on DeviantArt. Moon Technolabs's Profile. Moon Technololabs sur Twitter : "10 new #keyboard shortcuts in Windows 10 - CNET Develop New thing with #Moontechnolabs. TestNest offers insightful automated A/B marketing for iOS app developers. For app developers, analytics are important. A new tool, TestNest, wants to offer more than download and use stats; it hopes to give developers detailed insight on how users actually get to their apps. Though it doesn’t offer the tools that can be gleaned from the App Store (and are thus only available via Apple), TestNest lets developers A/B test via social and a website set up to mimic the App Store. Here’s how it works: A developer creates a campaign, which can use A/B testing and a landing page that resembles the App Store page.

The actual download happens via the App Store, so you can bounce from TestNest to take advantage of Apple’s analytics as well as any other tools you prefer. The key is TestNest’s landing page, which offers an alternate method for developers who want to know how a user arrives at their App Store listing. The testing can be done on one social account, or spread out as a developer sees fit. There are other solutions out there, of course.