Tutorial - Repair Your 18-inch Doll's Leg. LittleGirl had "Bring a Friend Friday" at school, and decided she wanted to take her American Girl Doll, Samantha. 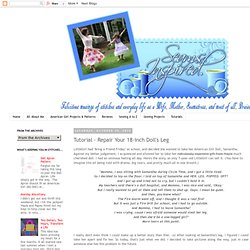 Against my better judgement, I acquiesced and allowed her to take her ridiculously expensive gift from Yiayia much cherished doll. I had an ominous feeling all day. Here's the story, as only 7-year-old LittleGirl can tell it. (You have to imagine this all being told with drama, big tears, and pretty much all in one breath.) "Momma, I was sitting with Samantha during Circle Time, and I got a little tired. So I decided to lay on the floor. And I got up and tried not to cry, but I couldn't hold it in. My teachers said there's a doll hospital, and Momma, I was nice and said, 'Okay.' But I really wanted to yell at them and tell them to shut up. And then, you know what? The Fire Alarm went off, and I thought it was a real fire! But it was just a Fire Drill for school, and I had to go outside. And Momma, I had to leave Samantha! And then she'd be a one-legged girl! 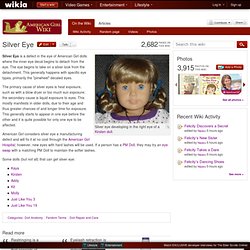 The eye begins to take on a silver look from the detachment. This generally happens with specific eye types, primarily the "pinwheel" decaled eyes. The primary cause of silver eyes is heat exposure, such as with a blow dryer or too much sun exposure; the secondary cause is liquid exposure to eyes. This mostly manifests in older dolls, due to their age and thus greater chances of and longer time for exposure. This generally starts to appear in one eye before the other and it is quite possible for only one eye to be affected. American Girl considers silver eye a manufacturing defect and will fix it at no cost through the American Girl Hospital; however, new eyes with hard lashes will be used. Some dolls (but not all) that can get silver eye: Rewigging An American Girl Doll. Rewigging is a modification of taking the wig off of a doll and/or replacing it with a different wig. 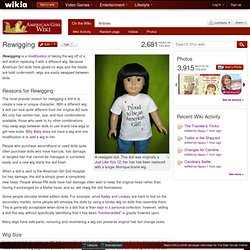 Because American Girl dolls have glued-on wigs and the heads are bald underneath, wigs are easily swapped between dolls. Reasons for Rewigging The most popular reason for rewigging a doll is to create a new or unique character. With a different wig, a doll can look quite different from her original AG look. AG only has certain hair, eye, and face combinations available; those who seek to try other combinations may swap wigs between dolls or use brand new wigs to get new looks.

People who purchase secondhand or used dolls quite often purchase dolls who have haircuts, hair damage, or tangled hair that cannot be managed or corrected easily and a new wig starts the doll fresh. When a doll is sent to the American Girl Doll Hospital for hair damage, the doll is simply given a completely new head. Some people simulate limited edition dolls. Wig Size. Rewigging - An Illustrated Guide - Just Magic.

There are many reasons to rewig a doll. 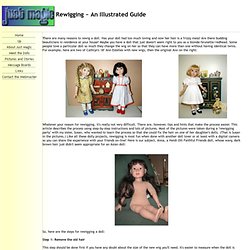 Has your doll had too much loving and now her hair is a frizzy mess? Are there budding beauticians in residence at your house? Maybe you have a doll that just doesn't seem right to you as a blonde/brunette/redhead. Some people love a particular doll so much they change the wig on her so that they can have more than one without having identical twins. For example, here are two of Cathryn's 18" Ann Estelles with new wigs, then the original Ann on the right: Whatever your reason for rewigging, it's really not very difficult. 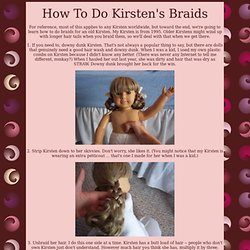 My Kirsten is from 1995. Older Kirstens might wind up with longer hair tails when you braid them, so we'll deal with that when we get there. 1. If you need to, downy dunk Kirsten. 2. 3. Wrap a towel around Kirsten for these next parts so she doesn't get too much stuff on her body. 4. You want to cover as much hair as possible, so I always hold Kirsten (or any other doll) at an angle to spread her hairs out. Finger comb the braid spray in. I always rub a teeny bit in her bangs, the crown of her head, and the short hairs on the back.