Mont Ivy Preschools. What after Montessori? The 3-year preprimary Montessori curriculum lays a strong foundation in a child for further learning. 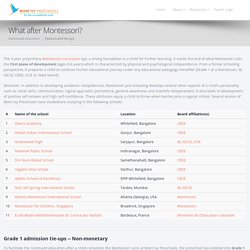 It marks the end of what Montessori calls the First plane of development (ages 0-6 years) which is characterized by physical and psychological independence. From a formal schooling perspective, it prepares a child to continue his/her educational journey under any educational pedagogy hereafter (Grade 1 at a Montessori, IB, IGCSE, CBSE, ICSE or State board). Moreover, in addition to developing academic competencies, Montessori pre-schooling develops several other aspects of a child's personality such as social skills, communication, logical approach, persistence, general awareness and scientific temperament. 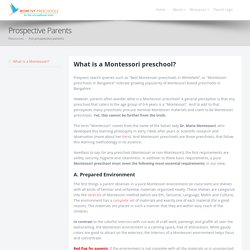 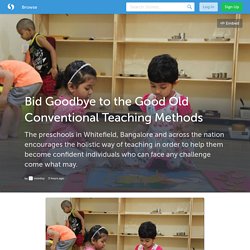 All we did was mug up book information to the core so that we get the desirable marks in the examination of all kinds. Obviously, those methods do have significance until today but have been replaced by more meaningful and understandable ones. Unwind Your Little One’s Potential and See them, Bloom. Children are flowers in the garden of life and nurturing them at every small step helps them become confident individuals who can handle any kind of situation come what may. 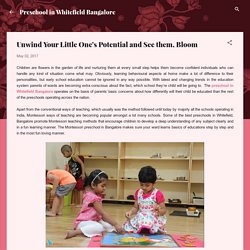 Obviously, learning behavioural aspects at home make a lot of difference to their personalities, but early school education cannot be ignored in any way possible. With latest and changing trends in the education system parents of wards are becoming extra conscious about the fact, which school they’re child will be going to. The preschool in Whitefield Bangalore operates on the basis of parents’ basic concerns about how differently will their child be educated than the rest of the preschools operating across the nation. Apart from the conventional ways of teaching, which usually was the method followed until today by majorly all the schools operating in India, Montessori ways of teaching are becoming popular amongst a lot many schools. What after Montessori? Montessori curriculum, approach and benefits. Mont Ivy Preschools. Teaching philosophy. Mont Ivy Preschools.