Netflix Blasts ISPs, Calls For “Strong” Net Neutrality And Explains Why It Pays Comcast. When Netflix agreed to pay Comcast as part of a peering agreement in the wake of the legal demise of net neutrality, the landscape of the Internet changed. 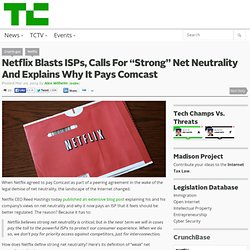 The weekend review: WhatsApp, lean startup and the EU app economy. Twitter’s Root Injustice. For the past three years this post has been stuck in the drafts folder of my computer. 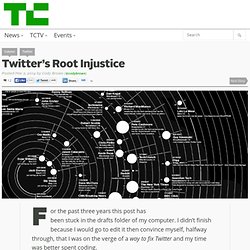 I didn’t finish because I would go to edit it then convince myself, halfway through, that I was on the verge of a way to fix Twitter and my time was better spent coding. I’ve stopped thinking that there is a solution for Twitter. There is, instead, a systemic problem that all digital platforms face but few have ever dared to tackle. 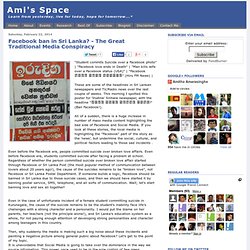 Netflix Reportedly Enters Paid Deal With Comcast To End Slowdown Standoff. [Update: Our initial take on the Netflix-Comcast agreement was called to task for implying that it would change how net neutrality would be applied to common infrastructure. 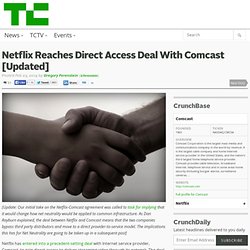 As Dan Rayburn explained, the deal between Netflix and Comcast means that the two companies bypass third party distributors and move to a direct provider-to-service model. The implications this has for Net Neutrality are going to be taken up in a subsequent post] Netflix has entered into a precedent-setting deal with Internet service provider, Comcast, to gain direct access to deliver streaming video through its network. The deal will cut out third-party transit providers and enable Netflix to more efficiently stream video to Comcast subscribers. Netflix eats up an incredible amount of global bandwidth. 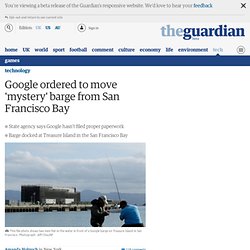 San Francisco Bay conservation and development commission executive director, Larry Goldzband, said the agency did not authorize the construction and that it had received numerous complaints about it. "It needs to move," Goldzband told the AP. There are at least two Google barges – one in Portland, Maine and the other is docked at Treasure Island in the San Francisco Bay. Goldzband said the Treasure Island development authority could face fines for allowing the project. He also said the issue could be resolved if Google moves its structure to permitted construction facilities in the bay. "We just received the letter from the San Francisco Bay Conservation and Development Commission and we are reviewing it,” Google said in an emailed statement. Wie Google Herrscher über das "Internet der Dinge" werden will. Washington. 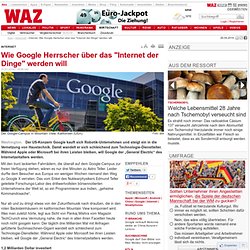 Microsoft’s Next CEO Reportedly Will Be Its Cloud Boss Satya Nadella, Gates Could Be Replaced On Board. After a search that stretched for months, reports are out today that Microsoft will select internal candidate Satya Nadella as its next CEO. 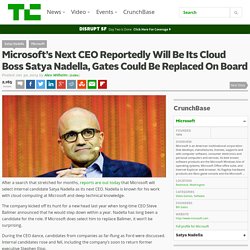 Nadella is known for his work with cloud computing at Microsoft and deep technical knowledge. Second Time’s The Charm For Lenovo’s Motorola Deal. Lenovo’s aspirations for an established mobile handset company goes back a few years. 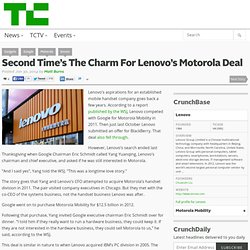 According to a report published by the WSJ, Lenovo competed with Google for Motorola Mobility in 2011. Stackdriver names Cisco vet to board, Amazon alum as advisor. Stackdriver, the Boston startup that monitors workloads running in public clouds, just added Hans Robertson, co-founder of Meraki, to its board of directors and Ben Matheson, formerly head of partner marketing for Amazon Web Services, as an advisor. 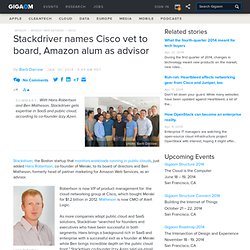 Hans Robertson Robertson is now VP of product management for the cloud networking group at Cisco, which bought Meraki for $1.2 billion in 2012. Matheson is now CMO of Alert Logic. As more companies adopt public cloud and SaaS solutions, Stackdriver “searched for founders and executives who have been successful in both segments. Hans brings a background rich in SaaS and enterprise with a successful exit as a founder at Meraki while Ben brings incredible depth on the public cloud front,” Stackdriver co-founder Izzy Azeri said via email.

Stackdriver, which competes with companies like Boundary and Datadog, has about $15 million in two rounds of venture funding by Flybridge Capital and Bain Capital.