Olivia Locher. We All Want to Be Young (leg) Millennial Horror Story. 6 Most Tear-Jerking Friends Moments. Americans Taste International Alcohols. 20+ Of The Most Awesome Teachers Ever. What Your Cat Really Thinks. Have you ever wondered what your kitty would say if he could speak? 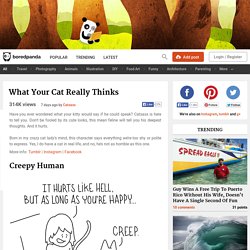 Catsass is here to tell you. Don’t be fooled by its cute looks, this mean feline will tell you his deepest thoughts. And it hurts. 21 Apps de Productividad que te cambiarán la vida #infografia. Guía para decidir TU FUTURO. Supercut: Fake Movies in Real Movies. 25 MORE Hilarious Signs from 'The Simpsons' Here's What Fictional Heroes Are Called In Other Languages. Are there aliens? 10 Tips for Surviving the Zombie Apocalypse. Harry Shum Jr.'s Treadmill Dance Video. Real Hogwarts School. Very important update: The wizard school we first told you about is hosting two sessions in April, both of which are already sold out. 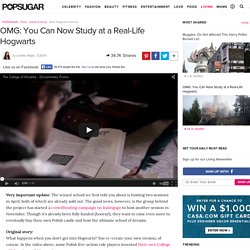 The good news, however, is the group behind the project has started a crowdfunding campaign on Indiegogo to host another session in November. Though it's already been fully funded (hooray!) Acompanhe a evolução do castelo de abertura dos filmes da Disney nos últimos 30 anos » MONSTERBOX. 12 Charts Only Game Of Thrones Fans Will Understand. 40 ways to Stay Creative. Watch Kids’ Priceless Reactions to Hearing the Timeless Music of The Beatles. Yesterday, John McMillian, assistant professor of history at Georgia State University, appeared on KQED’s Forum in San Francisco (listen here) to talk about his new book Beatles vs. 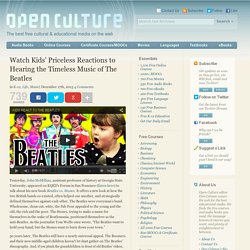 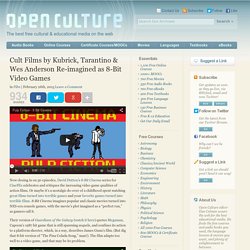 Or maybe it’s a nostalgic do-over of a childhood spent watching great films turned into terrible games and your favorite games turned into terrible films. 8-Bit Cinema imagines popular and classic movies turned into NES-era console games, with the movie’s plot imagined as a “perfect run,” as gamers call it. Their version of Guardians of the Galaxy (watch it here) quotes Megaman, Capcom’s 1987 hit game that is still spawning sequels, and confines its action to a platform shooter, which, in a way, describes James Gunn’s film. (But dig that 8-bit version of “The Pina Colada Song,” man!). The film adapts too well to a video game, and that may be its problem. The Philosophy of Friedrich Nietzsche Explained with 8-Bit Video Games. In the world of the 8-bit video game, there may be no more a frustrating, Sisyphusean task than completing the various iterations of Mega Man. 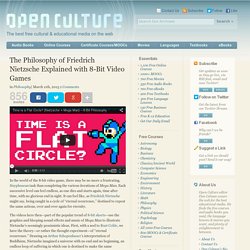 Each successive level can feel endless, as one dies and starts again, time after time, with no glorious end in sight. It can feel like, as Friedrich Nietzsche might say, being caught in a cycle of “eternal recurrence,” destined to repeat the same actions, over and over again for eternity. Watch Meryl Streep Have Fun with Accents: Bronx, Polish, Irish, Australian, Yiddish & More. Meryl Streep, frequently hailed as one of our Greatest Living Actresses — she claims there’s no such thing — commands a near-encyclopedic mastery of accents. 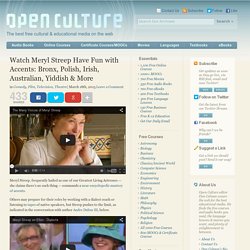 Others may prepare for their roles by working with a dialect coach or listening to tapes of native speakers, but Streep pushes to the limit, as indicated in the conversation with author Andre Dubus III, below. She not only learned Polish in order to play a troubled Holocaust survivor in Sophie’s Choice, she thought deeply about the way gender roles and period inform vocal presentation. Clearly a lot of effort goes into the performances that leave British critics cheering Streep as she sails above playing fields littered with American actors who dared attempt English accents. Her commitment to her craft is inadvertently to blame for popularizing the phrase “dingo’s got my baby.” How refreshing that this versatile and accomplished actor is not precious about her skills. A Mesmerizing Supercut of the First and Final Frames of 55 Movies, Played Side by Side. Popular Fitness Trends Of The Last 100 Years In 100 Seconds.

Iconic hairstyles of famous characters from pop culture. 21 Things That Happened On "Friends" That Would Baffle Kids Today. 23 Hysterical Dog Vines That Will Never Get Old. 6 awesome comic books you must read before the movies hit theaters. Having to do your background reading just to go and watch a movie sounds a whole lot like schoolwork, but thankfully when it comes to the world of comic books things ain’t so bad! 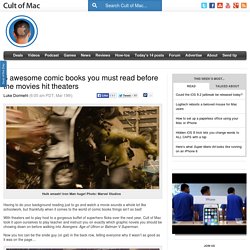 Is Easter about Jesus or bunnies? Both, actually. Walk past any store's Easter display and you're guaranteed to see bunnies, eggs, and candy. 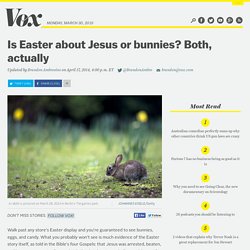 What you probably won't see is much evidence of the Easter story itself, as told in the Bible's four Gospels: that Jesus was arrested, beaten, and hung on a cross to die — a death that is taken to symbolize punishment for all of humanity's sins. His resurrection a few days later, according to the Christian faith, means that all people can be forgiven of their sins and reunited with God. Easter is arguably the most important day of the Church year because, as the apostle Paul says, without Jesus' death and resurrection, the entire Christian faith is "in vain. " So how did Easter go from the day Jesus rose again to the day giant bunnies leave pastel-colored eggs all over your house? The origins of the Easter bunny. John Oliver wants you to boycott April Fools' Day. Last Week Tonight's John Oliver released a YouTube video on Sunday exposing the true evil of April Fools’ Day — and why he wants viewers to boycott it. 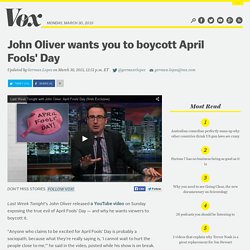 "Anyone who claims to be excited for April Fools' Day is probably a sociopath, because what they're really saying is, 'I cannot wait to hurt the people close to me,'" he said in the video, posted while his show is on break. April 1 is a popular excuse each year to play pranks and practical jokes on friends and family. Gestures Can Be Taken Very Differently Around the World So Please Read This Infographic. There's an App for That? 30 of the Most Insane Apps You Never Could Have Imagined. Jason Paul Arcade Run - Freerunning in 8bit. 9 Crazy Moments from Winter Olympics History. With the Sochi Olympics underway in Russia, we thought we'd take a look back at some of the Winter Games' wildest and most unpredictable moments. 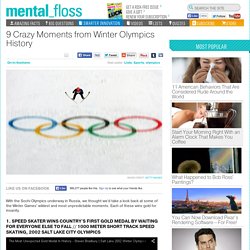 Every Country's Most Popular Beer. 3005 31Share3346 Today's map comes from VinePair, which followed up its look at the most popular beers in the U.S. with a global version. You can see it larger or scroll down. Europe/Africa The Americas Asia/Australia. 11 American Behaviors That Are Considered Rude Around the World. Just because you’ve mastered the art of not looking like an uncultured, uncouth slob in your country doesn’t mean those skills translate to the rest of the world. In fact, many things considered innocuous or even polite where you’re from might raise (or sternly lower) eyebrows in other parts of the world. With that in mind, here are 11 behaviors that are widely viewed as acceptable in the United States but considered rude in other corners of the globe.

Name the Movie With Only One Clue. Why Can't We Remember Dreams? 6 things everyone should know about plane crashes. On Tuesday, Germanwings Flight 4U9525 crashed into the French Alps, killing all 150 people on board. French prosecutors say the co-pilot, Andreas Lubitz, appears to have intentionally crashed the plane. How The Disney Universe Would Look If They Had The Internet. Knoword - Expand your vocabulary. Geeks and Nerds … Mark Your Calendars. For those of you living under a rock, or who at least stayed away from the Internet this past weekend, the entire geek and nerd community celebrated one of the most mainstream, well-recognized “holidays” within the community itself.

Star Wars Day was celebrated on May 4th, otherwise referred to as May the Fourth for effect, as if Lou Holtz himself was trying to repeat well-known Jedi adage “May the force (be with you).” Italy's Epic Treehouse Apartments Fulfill Everyone's Childhood Dreams. 21 Ridiculously Hot Products That Every Ridiculously Cold Person Will Want. In many parts of the country, winter has already arrived in full force, slamming states in the Midwest and the Rockies with up to 18 inches of snow.

5 Tips to Improve Your Study Habits. Whether you’re having trouble because your subject is difficult, time consuming or – let’s be honest – boring we have some tips here that can help you improve your studying habits. Keep reading for 5 ways you can study smarter from Kristopher Quaioit over at Bright Brain Learning: Feel like you’re working hard but still can’t reach your study goals?

Free indie and dream pop music playlist. Check out iZombie's awesome opening titles sequence, designed by Mike Allred. The CW has unveiled the cool opening titles sequence for its upcoming iZombie TV show, based on the Vertigo comics. As a nifty bit of connection to the source material, it uses the art of Michael Allred, Madman creator, Silver Surfer artist extraordinaire and the guy responsible for the look of the iZombie comic.

Optimize Your Downtime: The Complete Guide to Learning via Podcast. We all have random gaps in our schedule, also known as time confetti—short, finite bits of downtime that we usually spend flicking through Twitter or email. St. Patrick’s Day. Who Was Saint Patrick? Young Girls Prove Just How 'Phenomenal' They Are With This Awesome Tribute To Maya Angelou. Sometimes the smallest voices best deliver the most important messages. Children's Encyclopedia of Women. 5 Ways We Still Need to Improve Women's Rights. Women Lead the Future! Welcome to Women's History Month: here's how to honor it. Let's Celebrate! Today is International Women's Day. Radical Films About Young Women’s Lives.

10 Bad Ass Women In Film. Extraordinary Women Of History You Need To Know Now. How To Live Your Best Life, According To Five Of The Oldest Women In The World. Emma Watson Is Adorably Awkward Promoting International Women's Day.