Comics : the global history, 1968 to the present (Book, 2014) The power of comics : history, form, and culture (Book, 2019) Abstract: 'The Power of Comics' is the first textbook to introduce undergraduate students to a broader understanding of the medium and its communication potential. 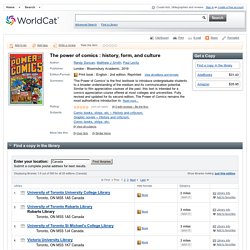 Similar to film appreciation courses of the past, this text is intended for a comics appreciation course offered at most colleges and universities. Fully revised and updated for its second edition, The Power of Comics remains the most authoritative introduction to comic books and graphic novels - the history of the medium, its many forms and manifestations and their place in contemporary culture. 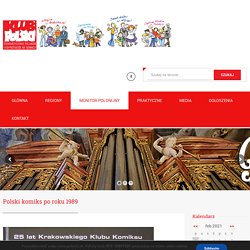 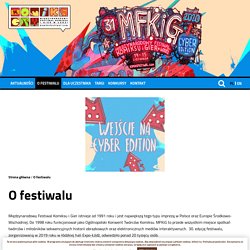 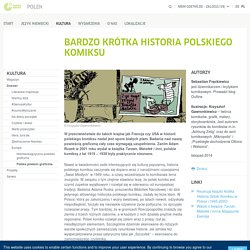 Krótki przewodnik po polskim komiksie. The 10 best ComiXology alternatives for digital comics. ComiXology are the undisputed kings of digital comics with millions of titles available from the world’s biggest publishers every week, as well as the very best independent titles released via their digital publishing arm ComiXology Submit. 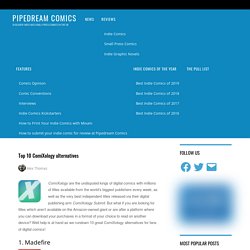 But what if you are looking for titles which aren’t available on the Amazon-owned giant or are after a platform where you can download your purchases in a format of your choice to read on another device? Well help is at hand as we rundown 10 great ComiXology alternatives for fans of digital comics! 1. Madefire. 10 best comic book apps and readers for Android. Best comic book apps: from Marvel to DC and everything in between. Excelsior! 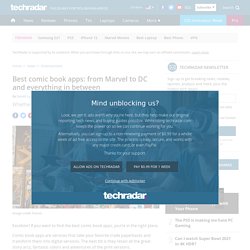 If you want to find the best comic book apps, you’re in the right place. Comic book apps are services that take your favorite trade paperbacks and transform them into digital versions. The best bit is they retain all the great story arcs, fantastic colors and adventures of the print versions. Although we know there’s lots to be said for the purists’ traditional paperbacks, reading comics in the digital age means they are more accessible than ever. What's the Best Tablet (eReader) For Comic Books in 2021? It’s clearer than ever that tablets are the perfect digital comic book reading option. 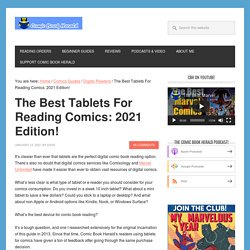 There’s also no doubt that digital comics services like Comixology and Marvel Unlimited have made it easier than ever to obtain vast resources of digital comics. What’s less clear is what type of tablet or e-reader you should consider for your comics consumption. Do you invest in a sleek 10 inch tablet? What about a mini tablet to save a few dollars? Could you stick to a laptop or desktop? What's The Best Digital Comic Book Subscription Service? When I was a boy, we used to walk uphill, barefoot and naked even, right in the snow both ways (!) 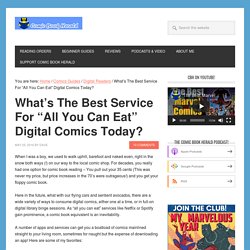 On our way to the local comic shop. Everything You Need to Know About Digital Comics. Comic books. 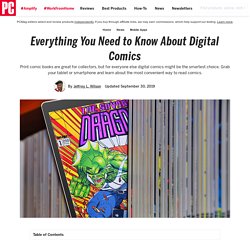 If you're of a certain age, you may remember their ubiquity, as they were sold in supermarkets, bodegas, and newsstands. If you're a bit younger, you may remember comic books as those periodicals that exist in dedicated stores or as trade paperbacks in Barnes & Noble. 7 best ways to buy and read digital comics right now. YouYou should read comics. 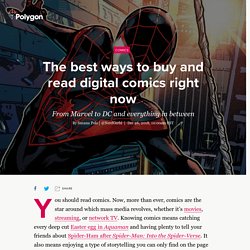 Now, more than ever, comics are the star around which mass media revolves, whether it’s movies, streaming, or network TV. Knowing comics means catching every deep cut Easter egg in Aquaman and having plenty to tell your friends about Spider-Ham after Spider-Man: Into the Spider-Verse. It also means enjoying a type of storytelling you can only find on the page — blockbusters can be great, but comics can take risks.

Plus, in the words of prolific comic writer Kelly Sue Deconnick: “Comics are always going to be cooler because we’re cheaper!” If you’re reading this, you’ve hopefully decided that you should get into comics. If that’s the case, you should be reading comics digitally. 10 Best comic readers for Android and iOS. Comics are a fantastic and diverse storytelling medium, as capable of exciting readers with thrilling superhero adventures as they are of breaking hearts with mature romances or educating through historical or biographical retellings.

Unfortunately, they're not the most portable of formats – just try lugging a longbox of single issues around. Thankfully, there's no shortage of options for digital comics now with the best comic readers make sure you've got voluminous archives of classic material, brand new releases, and original content designed exclusively to be read on your smartphone or tablet. Here's our pick of the best comics readers for taking your comic book collections wherever you go, without breaking your back. 1. Digital comics boost the popularity of their print counterpart – The 30 News. The heroics of digital media are still not appealing to the readers of print comic books. The shift in the digital publication market has led to a great concern amongst local comic-book retailers about a future in which comics come as digital downloads, and not bundles of paper sold in their retail stores.

It was not long ago that the music industry faced the same dilemma, as digital distribution interfered with the sales of CDs, and today the result is that the majority of music is digitally streamed or purchased online. “Over the past decade a technological convergence has changed the distribution, and consumption of graphic novels, which is currently affecting the dynamics of comic book stores ,” said Scott St. Amour, owner of Windsor’s Paper Heroes Comic Book Lounge & Collectibles. However, while still below the levels of the comic boom of the early 1990s, the trajectory of the graphic novel market in recent years has been positive. That all changed once the iPad was released. : Yearly Comic Book Sales. Search for titles on Comichron! Search tips Custom Search Yearly comic book sales can be calculated in a number of ways. The data currently on Comichron comes in three varieties: The most all-inclusive information we have comes in our Industry-Wide Reports, which beginning with 2013 Comichron has collaborated on with ICV2.com in order to include not just the comics shop market, but also the book channel and digital sales.

Why comic books are so popular today. The comic book industry just had its best-selling month in nearly two decades. According to The Comichron, a blog that covers comic book sales figures, June 2016 was the best-selling month for the industry since December of 1997. These figures aren't perfect, since the only way to track sales is to record the number of orders retailers are making rather than individual purchases, but they paint a pretty good picture. Retailers ordered about 8.53 million copies of the top 300 comics last month. A Comic Book Lover's Guide to Going Digital. Digital disruption in the creative industries: the case of the American comic book market.

Can Digital and Print Peacefully Coexist in the World of Comic Books? Mark Waid, one of the leading proponents of digital comic books, made a surprising announcement on his blog earlier this month: He recently bought a comic book store and invested in a second one. In addition to being an award-winning comic book writer, Waid is a co-founder of Thrillbent, a platform for digital comic books, and an advocate of comics produced for online viewing. Yet, Waid’s move may not be as unexpected as it initially appears. Comic books buck trend as print and digital sales flourish.

Digital disruption has upended virtually every corner of publishing, but in the world of comic books, something curious is happening: Print sales are thriving alongside the rise of their digital counterparts. Print comic book revenues have been on the rise in recent years, even as digital comics’ sales boom. Print receipts have held up at a time when publishers have introduced all-you-can-download subscriptions that offer thousands of comics for a flat monthly or annual fee.

In 2014, digital comics revenues excluding unlimited subscriptions reached $100 million, according to ICv2, an online trade magazine that tracks comic sales and other trends. That was up from just $1 million seven years ago, when ICv2 started collecting data. Meanwhile, the North American market for print comics grew from an estimated range of $650 to $700 million in 2009 to $835 million in 2014, according to ICv2 and the Comics Chronicle.

Komiksy elektroniczne: jak czytać? - Woblink. A Very Brief History of Comic Books. This post contains affiliate links. When you buy through these links, Book Riot may earn a commission. Illustrated folios and wooden plates have been categorized as important artistic and political devices since the early points in most civilizations. Graffiti in Roman cities were political, but also crude and funny. Illuminated manuscripts contained holy images, but also doodles that have baffled historians for centuries. Illustrating a story to make it more appealing to an audience has been at the forefront of the human mind since its early existence in caves. So, the way I decided to structure this post is through a timeline evolution.