Govt approves Signing of India-Uruguay pact on Customs: moneymakerf. The Government has approved the signing and ratifying an agreement between India and Uruguay concerning to co-operation and mutual assistance on Customs matters. 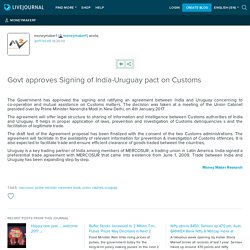 The decision was taken at a meeting of the Union Cabinet presided over by Prime Minister Narendra Modi in New Delhi, on 4th January 2017. The agreement will offer legal structure to sharing of information and intelligence between Customs authorities of India and Uruguay. It helps in proper application of laws, prevention and investigation of Customs delinquencies s and the facilitation of legitimate trade. The draft text of the Agreement proposal has been finalized with the consent of the two Customs administrations. The agreement will facilitate in the availability of relevant information for prevention & investigation of Customs offences. Uruguay is a key trading partner of India among members of MERCOSUR, a trading union in Latin America. 2016 Annual Stock Market Summary, Happy New Year 2017. The Year 2016 is marked by volatility from global and local events. 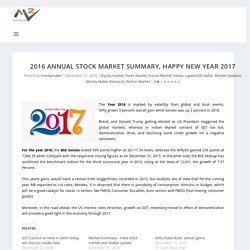 Nifty grown 3 percent overall gain while Sensex was up 2 percent in 2016. Brexit, and Donald Trump getting elected as US President staggered the global markets, whereas in Indian Market consent of GST tax bill, demonetization drive, and declining bank credit growth hit a negative sentiment. For the year 2016, the BSE Sensex ended 509 points higher at 26,117.54 levels, whereas the Nifty50 gained 239 points at 7,946.35 when Compare with the respective closing figures as on December 31, 2015. 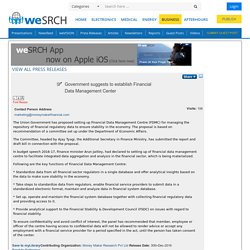 The proposal is based on recommendation of a committee set up under the Department of Economic Affairs. The Committee, headed by Ajay Tyagi, the Additional Secretary in Finance Ministry, has submitted the report and draft bill in connection with the proposal. In budget speech 2016-17, Finance minister Arun Jaitley, had declared to setting up of financial data management centre to facilitate integrated data aggregation and analysis in the financial sector, which is being materialized. Following are the key functions of Financial Data Management Centre: Asian Round Up: Rupee, Euro, Gold, Silver News. The euro soured to its highest in three weeks in thin Asian trade on Friday. 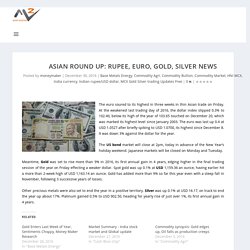 At the weakened last trading day of 2016, the dollar index slipped 0.3% to 102.40, below its high of the year of 103.65 touched on December 20, which was marked its highest level since January 2003. The euro was last up 0.4 at USD 1.0527 after briefly spiking to USD 1.0700, its highest since December 8. Happy New Year From Money Maker Research. Govt appoints Viral V Acharya as RBI Deputy Governor - Exact Release 03:21 am. Return to: Economy News The Union Government has appointed Viral V. 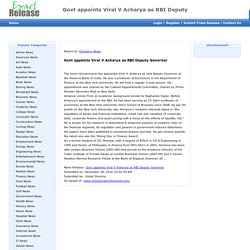 NSE files IPO papers with SEBI; may raise Rs. 10,000 crore. The National Stock Exchange (NSE) on Wednesday filed draft papers with Securities & Exchange Board of India (SEBI) for its much-awaited Initial Public Offering (IPO), which is expected to be one of the biggest in recent times with an estimated volume of over Rs. 10,000 crore. 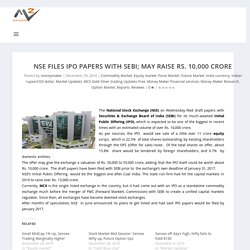 As per sources, the IPO would see sale of a little over 11 crore equity scrips, which is 22.5% of total shares outstanding, by existing shareholders through the OFS (Offer for sale) route. Of the total shares on offer, about 15.8% share would be tendered by foreign shareholders, and 6.7% by domestic entities. Gold Enters Last Week of Year, Sentiments Choppy, Money Maker Research. Wishing you a Merry Christmas .... Bear Hitting Hardly, Sensex Nifty Under Pressure ~ Money Maker Research Pvt. Ltd.(Investment Advisor) After a poor opening in the morning, bear struck down the Indian stock market in the mid noon session, where equity benchmark indices have already dropped more than 1%. 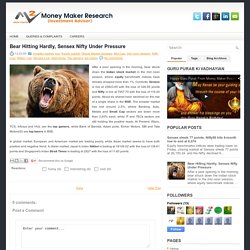 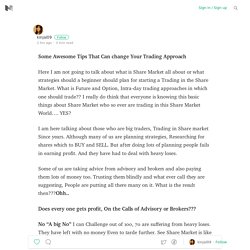 What is Future and Option, Intra-day trading approaches in which one should trade?? I really do think that everyone is knowing this basic things about Share Market who so ever are trading in this Share Market World…. YES? I am here talking about those who are big traders, Trading in Share market Since years. Equity Report Daily by Money Maker Reseach - Exact Release 05:00 am. Return to: Finance News Markets recouped intra-day losses to end higher, amid firm global cues, led by select index heavyweights and capital goods shares. 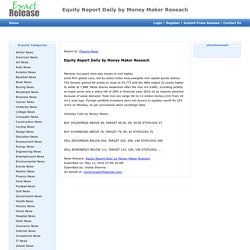 The Sensex gained 84 points to close at 25,773 and the Nifty edged 22 points higher to settle at 7,888. Metal shares weakened after the iron ore traffic, including pellets, at major ports saw a sharp fall of 28% in financial year 2015-16 as imports declined because of weak demand. Total iron ore cargo fell to 13 million tonnes (mt) from 18 mt a year ago. Foreign portfolio investors were net buyers in equities worth Rs 224 crore on Monday, as per provisional stock exchange data. Get Sure and Right Advise by Money Maker Research. Daily Equity Report by Money Maker Reseach - Exact Release 12:38 am. Return to: Finance News Markets recouped early losses to end near day's high, amid a rebound in European stocks, with stock specific action seen post the fourth quarter earnings. 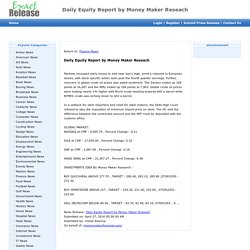 Further, recovery in global crude oil prices also aided sentiment. The Sensex ended up 328 points at 26,007 and the Nifty ended up 108 points at 7,963. Global crude oil prices were trading nearly 1% higher with Brent crude heading towards $45 a barrel while NYMEX crude was inching closer to $43 a barrel. In a setback for steel importers and relief for steel makers, the Delhi High Court refused to stay the imposition of minimum import price on steel. MCX Daily Report 27 April 2016. Gold prices lost in the intraday trades of Wednesday on MCX. The prices closed at Rs 29200 per 10 grams on 26 April 2016, against Rs 29262 per 10 grams on 25 April 2016.

All important levels at Rs 29000 per 10 grams are intact in Gold. The selling pressure is an indicator of profit booking after some recent gap up openings and underpinning in the yellow metal. MCX Commodity Report 25 April 2016. Gold prices are expected to get underpinned at the start thanks to the gains in the COMEX division in the early Asian session and Federal Reserve meet ahead this week that will keep speculators interested.

The yellow metal saw deep cracks emerging in the last week sessions and ended the last day with losses of 1.1% to Rs 29022 per 10 grams. The Friday session saw Gold testing a high of Rs 29420 per 10 grams and a low of Rs 28986 per 10 grams. MCX Daily Report by Money Maker Research - Exact Release 05:15 am. Return to: Finance News PRECIOUS METALS: Gold prices are expected to remain cautious in coming days ahead of Federal Reserve Meet on 26th and 27th April. On the Comex division of the New York Mercantile Exchange, gold for June delivery was down 0.17% to $1,252.20 a troy ounce. the Federal Reserve is not expected to raise short-term interest rates at the meeting, the U.S. central bank could provide hints on whether it will approve a rate hike at a subsequent meeting in June.

Gold has jumped approximately 3% since Fed chair Janet Yellen sent strong indications in late-March that the U.S. central bank will express extreme caution with the timing of future rate hikes in the near-term future. ENERGY: Crude Oil prices in international markets are still mourning the fact that the meeting of Oil producing regions flunked to freeze output. This would have directly impacted the prices and might have refurbished the lost demand. East Asia Under Fear Streak of Economic Downturn in China. The Economic Downturn of China can defeat the development rates in the East Asian Countries.

According to the released report from World Bank, this poor economy session in China will affect the developing eastern Asian and Pacific areas. This Recession may affect the country for next 3 years. As per the reports, in this region the Development Rates were 6.5% in 2015, which will be dropped to 6.3% till the end of this year. In next two years this rate will fall down to 6.2%. The world bank has also released a report to deal with this unstable market and tactics to deal with it. Presently, the Chinese Government is giving their all efforts to fix this economic imbalance of China. Drop in development rates of china is a big trouble and also a warning for the world.

Return to: Business News Markets ended the session on a weak note, amid choppy trades, weighed down by selling pressure in pharma shares with Lupin leading the decline.The Sensex ended at 24,900, down by 66 points while the Nifty closed at7, 597, down by 18 points. Investors across the globe are waiting for a speech by the US Fed Chair to get some clues on interest rates following a weak US data. Intraday Tips Today.