Fashionista. After 10 years of successful collaborations with Adidas, Stella McCartney is releasing a younger, bolder and more affordable line with the German sportswear company on January 15. 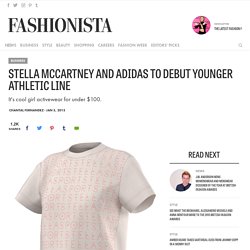 According to a rep for Adidas, the athletic collection is named StellaSport and will be available for purchase at Adidas.com, Topshop and Nordstrom, and is aimed at girls ages 15 through 19. Apparel, shoes and accessories are priced between $20 to $100, down from $60-$600 from her main line. In a statement, McCartney said, "The Adidas StellaSport girl is young, current and vibrant, looking to make a statement and stand out -- we wanted to bring that to life within the collection and fuse performance with style to create performance pop.” There are a few pieces already available for European customers to purchase online at tennis apparel websites. McCartney is a frequent collaborator with other brands, usually with great success.

Advertisement — Continue reading below. Stella McCartney unveils collaboration for Adidas targeted at the 'young, current and vibrant girl' The 43-year-old has teamed up with Adidas for cool workout rangeClothes and accessories between £15 and £80, and aimed at 'action girl'Stella is close to Cara Delevingne, who champions this casual, sporty style By Bianca London for MailOnline Published: 09:12 GMT, 11 January 2015 | Updated: 12:23 GMT, 12 January 2015. 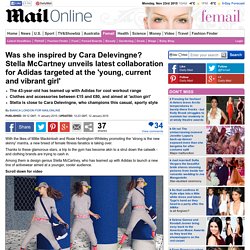 Protein princesses and 'athleisure' - what's driving the £6bn UK sports market. Athleisure: A Mass Movement Not A Trend? - EDITED. If you’ve not heard of athleisure, you must have been trekking in the Andes for the last 18 months. 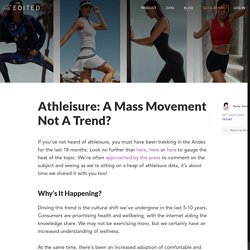 Look no further than here, here or here to gauge the heat of the topic. We’re often approached by the press to comment on the subject and seeing as we’re sitting on a heap of athleisure data, it’s about time we shared it with you too! Why’s It Happening? Driving this trend is the cultural shift we’ve undergone in the last 5-10 years. Consumers are prioritising health and wellbeing, with the internet aiding the knowledge share. Lululemon, Nike and the Rise of Athleisure – Marketing Discussions. By: Melissa Miller A new trend has entered the fashion and retail world over the past few years and that trend is called Athleisure. 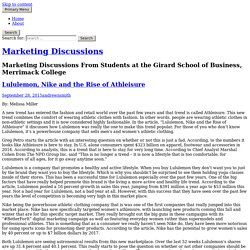 This new trend combines the comfort of wearing athletic clothes with fashion. Everything You Need To Know About The ‘Athleisure’ Trend. It started with those awful people who like to go to the gym before work, and stumble into the office in a mismatched getup consisting part gym wear, part standard office attire. 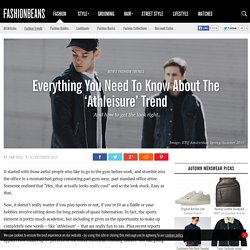 Someone realised that “Hey, that actually looks really cool” and so the look stuck. Easy as that. Now, it doesn’t really matter if you play sports or not, if you’re fit as a fiddle or your hobbies involve sitting down for long periods of quasi-hibernation. In fact, the sports element is pretty much academic, but including it gives us the opportunity to make up completely new words – like ‘athleisure’ – that are really fun to say. Plus recent reports estimate that the athleisure market was worth around $35 billion last year and athletic apparel now makes up 17 per cent of the entire American clothing market.

Forbes Welcome. What Is SoulCycle, and Why Are People Obsessed With It? A company called SoulCycle, well-known in big cities like New York and San Francisco, has decided to go public. 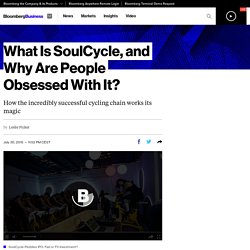 Wall Street is aflutter, and so are fitness fanatics familiar with the workout chain, which is notorious for inspiring a cult-like following. SoulCycle's filing includes phrases like "Your Soul Matters" and "We Aspire to Inspire" to describe the culture of its 45-minute indoor-cycling classes, which can cost close to $40. Here are five reasons why SoulCycle has grown so quickly—and appears to have a successful road ahead.

How upstart Peloton is taking on SoulCycle's cult fitness brand. Is SoulCycle too snobby for America? Cycling experts weigh in. Cycling is coming to Wall Street. 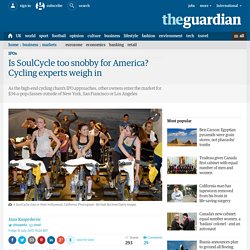 SoulCycle, the high-end indoor cycling chain, filed for an initial public offering (IPO) on Thursday in hopes of raising as much as $100m. The New York-based company, which has 38 studios across the US, didn’t specify how many shares it plans to offer or at what price. As the IPO approached, the main question potential investors will be asking is: how many Americans are willing to pay $35 to ride a bike in a dimly lit room for 45 minutes while being yelled at? Soul-cycle. Fashion, sports, and tech go hand in hand at made’s autumn/winter fast panel. On Saturday at Milk Studios in New York, the beginnings of a blizzard swept in Intel CEO, Brian Krzanich; VP and General Manager of Intel's New Devices Group, Mike Bell; head designer at Pigalle, Stephane Ashpool; CEO and founder of Moondial, Sabine Seymour; and the New York Knicks' and 8-time NBA All-Star and founder of Melo7 Tech Partners, Carmelo Anthony, to discuss the future of wearable technology for Made Fashion Week's autumn/winter FAST panel. 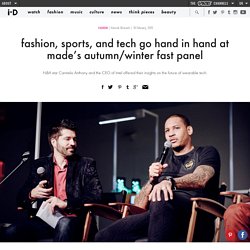 The event, a collaboration between MADE Fashion Week and KATALYST LIVE, was hosted by Brent Blum, lead of Wearable Tech Practice at Accenture, a digital consulting company that has worked with MADE in the past. Photography Andrew Boyle. ​mr porter launches sportswear section. Mr Porter Sport launched today, serving sportswear to its 170 global destinations. 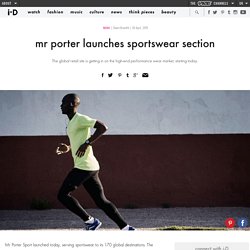 The fashion site figured out that 90% of their customers were doing sport at least once a week, 79% were doing it more than once and 54% were runners, so they were keen to cater to that market. Beyond that, there's clearly a certain masculine glamour about the sports they're covering, from cycling to tennis and golf to sailing. As well as continuing with 10 existing sports brands such as Nike, Lacoste and Patagonia, Mr Porter will be introducing 15 new ones (including Arc'teryx, Condor, Brooks England, Oakley and many more). And as well as apparel, there are goggles, gadgets and even bikes in the selection. Just do it! how sportswear innovation has created fashion staples. There's a romance to running. 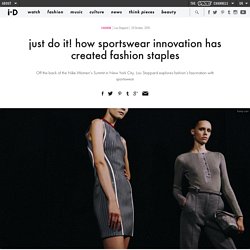 It's so much more than sweaty City boys jogging home with ugly commuter backpacks and draconian cross country competitions at school. Remember Jenny crying 'Run, Forrest, Run,' to spur on a bullied Forrest Gump? Remember Paula Radcliffe relieving herself in the street just to keep her pace? Remember Mo Farah!? ​yeezy season one drops in store tomorrow. "I don't want the clothes to be the life," Kanye West says in a release about the long-awaited drop of Yeezy season one in stores tomorrow, "I want the clothes to help the life". Well, if you want these particular clothes to help your life, you should probably start camping outside Harvey Nichols, Selfridges, Liberty or a number of smaller UK retailers now, or get refreshing MrPorter.com, because the thirst is real. Described by Kanye as the world's first "solutions-based" clothing line, the collection features oversized jackets and sweaters and skin-tight bottoms in mostly neutral colours that you can layer to your heart's content.

If you just can't wait and need some Yeezy in your life right now, check out the lookbook images published here and also watch a film loop of the development of the collection on yeezy.supply. #YeezySeason1. Exclusive: we shoot kanye west’s yeezy adidas collection. ​why the nikelab lunar force 1 x acronym collaboration signals the beginning of something special. "The choice of the shoe came from Nike and our first reaction was to ask, 'why do you want us to do this? ' They had very specific reasons and wanted us to use the Lunar Force 1," Errolson begins. "We made it clear that we weren't just going to want to colour it in and Nike were extremely open minded.

There were no limitations or restrictions. " Nike and stussy team up to recreate the air max 95. 2015 has been a monumental year for Stussy as the skate brand celebrated its 35th year in the business and launched an special collection of re-imagined archive pieces with collaborators Deanna Fanning and Mark Lebon. Now the brand has teamed up with Nike in the first time since 2013 to rework the Air Max 95 which remains a beloved favourite amongst sneakerheads. From first glimpses of the model, the colourway is black and white monochrome with the Stussy logo embedded in the sole of the shoe. Little is known yet about the specifics and more importantly the release date but we can imagine the shoe to be highly anticipated upon release!

Stussy.co.uk. Rihanna Puma Creative Director Designer Sportswear. 16 December 2014 Lauren Milligan RIHANNA has been named creative director of Puma, overseeing the direction of the womenswear line, and will join famous sportsmen including Usain Bolt and Mario Balotelli as a brand ambassador. The singer arrived at the company's headquarters in Germany yesterday and had her first creative meeting with the design team.

Having signed a "multi-year partnership" with the company, Rihanna will take a "hands-on approach," WWD reports, working on Puma's fitness and training collections across apparel as well as shoes. Rihanna "will work with Puma to design and customise classic Puma styles as well as create new styles to add to the Puma product portfolio," Puma said in a statement today. Related Gallery. Five reasons the UK is going crazy for sportswear. Global Retail Sporting Goods Industry 2015-2020 - Trend Profit and Forecast Analysis.

Edmund Shing: UK goes mad over online shopping - BooHoo and Sports Direct worth an investment look. Global Retail Sporting Goods Industry 2015-2020 - Trend Profit and Forecast Analysis. Birmingham City University - Sign In. UK sportswear market to surpass $8bn by 2019. Home. Home. The 3-Year Evolution of Lululemon's Brand Image - Agent Athletica. 2012 versus 2015: nada jacket / fast and free crops / if you’re lucky tank / swiftly long sleeve Although quality and design of products generally form the bedrock of most people’s purchasing decisions, the experience we have as customers and how the brand makes us feel is crucial in determining our loyalty to a brand (and how many “sins” we will forgive them for). I first started shopping at lululemon in 2012, but since then, how the brand makes me feel has changed a lot.

Why 'Athleisure' Wear Appears To Be Unseating Jeans (VIDEO) It's the universal trend that has stayed fashionable for centuries. So could blue jeans really be fading away? NBC reports the 2013 sales of jeans in the U.S. dropped 6 percent. That might not seem like a huge percentage, but the news outlet spoke with a chief industry analyst who said, "It's rare for denim to take such a dramatic drop. " Stylerunner - the leading destination for the world's most coveted activewear.

WTF is 'Athleisure'? Athleisure: Stretching the definition of fashion - BBC News. Nike, Under Armour To Ride On Athleisure Craze. Nike Inc. (NKE) Q1 Earnings Preview: 'Athleisure' Apparel Key To Brand's Growth. Kate Spade New York and Beyond Yoga Team for Ath-leisure. Athleisure: Where the Word Came From. The sportswear revolution: EDITD analyzes data around activewear apparel boom. Are You Going to the Gym, or Do You Just Dress That Way? Watch: All the things we do in our athleisure in one hilarious video. Tim Gunn Hates Athleisure. Athleisure Trends Women’s Shoes & Accessories. The 7 Coolest Athleisure Looks from the London Runways.

What Is Athleisure? Industry Spotlight: On Women’s Activewear, Part I. From Alexander Wang to Beyonce: The Rise of Athleisure. Edelkoort: The rise of the 'Entertraining' and Active wear - Fashion - Fashion-news. Is Activewear the New Denim? Rise of Fitness Blogs: How to Turn Your Passion into a Profitable Enterprise. For the Activewear Market, There’s No Way But Up. Fitness Trend Forecast for 2015: 6 Trends on the Rise  A fashion for fitness. Do Your Workout Clothes Affect Your Workout?: Glamour.com.

Why Fitness Is Having a Moment in Fashion. For the Activewear Market, There’s No Way But Up. London Health & Fitness Girl. A Healthy Curiosity: The rise of luxe fitness brands. The Rise of Fitcations - alive. Health And Fitness Instagrammers With Half A Million Followers (Combined) Reveal Tips For Success.