00_logs.md. Anu. In Sumerian mythology, Anu (also An; from Sumerian *An 𒀭 = sky, heaven) was a sky-god, the god of heaven, lord of constellations, king of gods, spirits and demons, and dwelt in the highest heavenly regions. 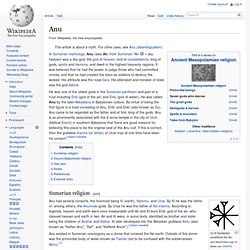 It was believed that he had the power to judge those who had committed crimes, and that he had created the stars as soldiers to destroy the wicked. His attribute was the royal tiara. His attendant and minister of state was the god Ilabrat. Sumerian religion[edit] Ur III Sumerian cuneiform for An(and determinative sign for deities see: DINGIR) Anu existed in Sumerian cosmogony as a dome that covered the flat earth; Outside of this dome was the primordial body of water known as Tiamat (not to be confused with the subterranean Abzu).[1]

Nibiru (Babylonian astronomy) Nibiru (also transliterated Neberu, Nebiru) is a term in the Akkadian language, translating to "crossing" or "point of transition", especially of rivers,[1] i.e. river crossings or ferry-boats. 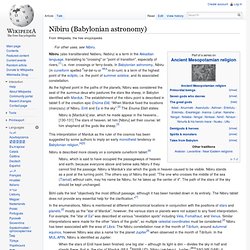 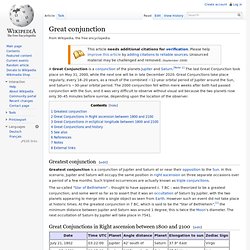 [Note 1] The last Great Conjunction took place on May 31, 2000, while the next one will be in late December 2020. Great Conjunctions take place regularly, every 18–20 years, as a result of the combined ~12-year orbital period of Jupiter around the Sun, and Saturn's ~30-year orbital period. The 2000 conjunction fell within mere weeks after both had passed conjunction with the Sun, and it was very difficult to observe without visual aid because the two planets rose only 30–45 minutes before sunrise, depending upon the location of the observer. 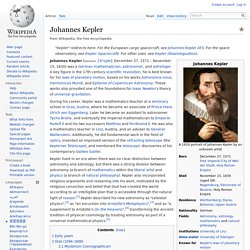 A key figure in the 17th century scientific revolution, he is best known for his laws of planetary motion, based on his works Astronomia nova, Harmonices Mundi, and Epitome of Copernican Astronomy. These works also provided one of the foundations for Isaac Newton's theory of universal gravitation. During his career, Kepler was a mathematics teacher at a seminary school in Graz, Austria, where he became an associate of Prince Hans Ulrich von Eggenberg. Later he became an assistant to astronomer Tycho Brahe, and eventually the imperial mathematician to Emperor Rudolf II and his two successors Matthias and Ferdinand II.

He was also a mathematics teacher in Linz, Austria, and an adviser to General Wallenstein. Early years[edit] Birthplace of Johannes Kepler in Weil der Stadt Graz (1594–1600)[edit] Mysterium Cosmographicum[edit] Summing-up the Amaranth - Elder Scrolls Lore. A ghost is on the forum ; the 6 month and 13 threads long Amaranth discussion. 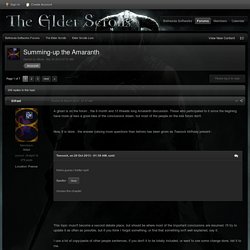 Those who participated to it since the begining have more or less a good idea of the conclusions drawn, but most of the people on the lore forum don't. Now, it is done ; the answer (raising more questions than before) has been given as Toesock birthday present : Toesock, on 20 Oct 2013 - 01:38 AM, said: Hunt the Amaranth XIII - Elder Scrolls Lore. First reply to Nordjitsu, then Toesock. 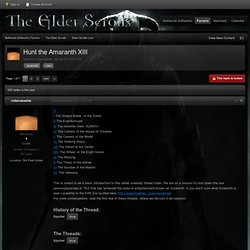 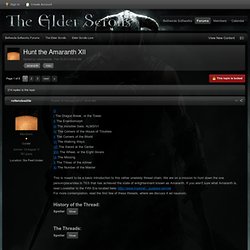 The obscurest, Amaranthyest scripture we have. Very well! I'll give it a shot. I'm going to skip around a bit. Quote. Hunt The Amaranth XI - Elder Scrolls Lore. We also haven't analyzed the Tsaesci Creation Myth (...and we ate it to become it) in detail yet. 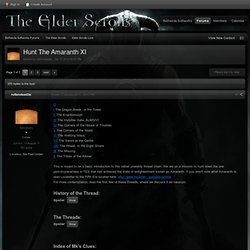 I'll do that now and maybe you guys can draw some more parallels to the Annuad and other creation myths. Going to be a long but hopefully good read. Quote. Hunt The Amaranth X - Elder Scrolls Lore. Quote This is the promise of the PSJJJJ: egg, image, man, god, city, state. 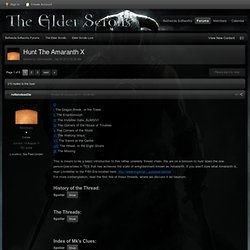 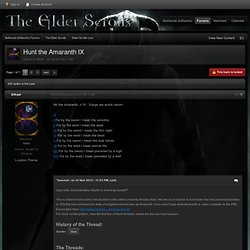 He has to lead the dunmert throught the Way of Endeavour to Amaranth. And it is what we have seen do.That's why I think that the idea of folk, Houses, central in the dunmeri culture, may lead them to Amaranth.And why not all other people? Idk, Nerevar's disappearance by the time of Oblivion could signify his "leaving Tamriel behind in a rear-view mirror. " The Akaviri rumor could be true... he could be going on his ques to finish becoming the Amaranth. MK had this to say about Nerevar and Vivec. Quote. Hunt The Amaranth VIII - Elder Scrolls Lore. 'Sifrael', on 02 Jan 2013 - 2:31 PM, said: Perhaps Vivec and Camoran don't have the same vision of Nu-Mantia! Liberty!. For Vivec it is Amaranth, so he sees Mnemoli with a good eye.For Camoran, it is only power over mortals and living in a paradise, and this is the opposite of what Mnemoli is. The Mythic Dawn Commentaries really are a treasury of lore. Hunt the Amaranth VII - Elder Scrolls Lore.

'Sifrael', on 28 Dec 2012 - 8:32 PM, said: Hi Amaranth Nirners ! Okay, let me just say first about this post of yours: I think you've made tremendous headway. - Cyrus is the HoonDing, both sword and crown (and so, both and sword, both Ruling King and Rebel). Is he? He insists that he ain't in the story /smile.png' class='bbc_emoticon' alt=':)' /> But it may not matter. . - Scarab-Framer is mentioned by Vehk, and belongs to the Magne-ge pantheon... linked to Mnemoli, as a Y sign. Hunt the Amaranth VI - Elder Scrolls Lore. Earth Bones seems to be good answer and i've been tossing it in my head for couple days, so here's my speculation for the matter. Dwemer were highly interested of it during Dawn and their Walking way bases on that principle (and this is my route to Earth Bones as i've been looking Dwemer lately). Forexample these statements of Dwemer: Quote "During the Dawn Era they researched the death of the Earth Bones, what we call now the laws of nature, dissecting the process of the sacred willing itself into the profane.