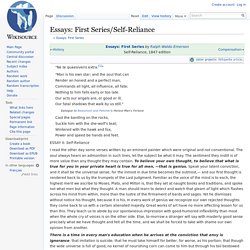 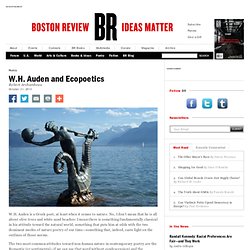 Auden is a Greek poet, at least when it comes to nature. Henri Bergson. First published Tue May 18, 2004; substantive revision Wed May 8, 2013 Henri Bergson (1859–1941) was one of the most famous and influential French philosophers of the late 19th century-early 20th century. 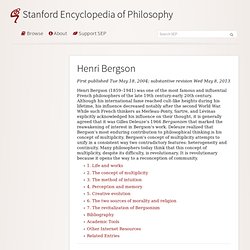 Although his international fame reached cult-like heights during his lifetime, his influence decreased notably after the second World War. While such French thinkers as Merleau-Ponty, Sartre, and Lévinas explicitly acknowledged his influence on their thought, it is generally agreed that it was Gilles Deleuze's 1966 Bergsonism that marked the reawakening of interest in Bergson's work. Deleuze realized that Bergson's most enduring contribution to philosophical thinking is his concept of multiplicity. Bergson's concept of multiplicity attempts to unify in a consistent way two contradictory features: heterogeneity and continuity. 1. Bergson was born in Paris on October 18, 1859; he was the second of seven children of a Polish Father and English mother; both of his parents were Jewish. Thomas Gray Archive : Texts : Poems : "Ode on a Distant Prospect of Eton College" "Ode on a Distant Prospect of Eton College" 1 Ye distant spires, ye antique towers, 2 That crown the watery glade, 3 Where grateful Science still adores 4 Her Henry's holy Shade; 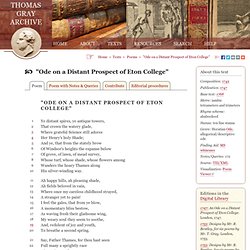 Jean-Paul Sartre. I cannot make liberty my aim unless I make that of others equally my aim. 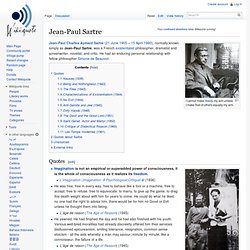 Jean-Paul Charles Aymard Sartre (21 June 1905 – 15 April 1980), normally known simply as Jean-Paul Sartre, was a French existentialist philosopher, dramatist and screenwriter, novelist, and critic. He had an enduring personal relationship with fellow philosopher Simone de Beauvoir. Quotes[edit] Every age has its own poetry; in every age the circumstances of history choose a nation, a race, a class to take up the torch by creating situations that can be expressed or transcended only through poetry. Absurdism. Absurdism is a philosophical stance embracing a wide range of relativist perspectives, which implies that the efforts of humanity to find or absolutely define, limit, express or exclude the inherent meanings of anything, including human existence, are absurd because the qualities of communicable information available to the human mind, and relationships within Reality makes any certainty about such impossible. 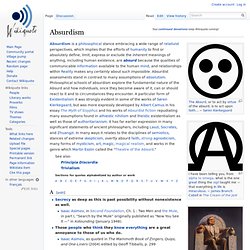 Absurdist assessments stand in contrast to many assumptions of absolutism. Philosophical schools of absurdism explore the fundamental nature of the Absurd and how individuals, once they become aware of it, can or should react to it and to circumstances they encounter. What Books Do Writers Teach?: Zadie Smith and Gary Shteyngart’s Syllabi from Columbia University. Many, if not, most writers teach—whether literature, composition, or creative writing—and examining what those writers teach is an especially interesting exercise because it gives us insight not only into what they read, but also what they read closely and carefully, again and again, in order to inform their own work and demonstrate the craft as they know it to students. 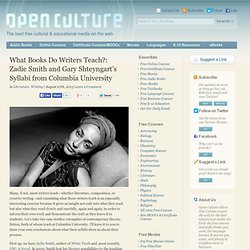 Let’s take two case studies: exemplars of contemporary literary fiction, both of whom teach at Columbia University. Analysis of a "bad" poem. PREFACE: I read a poem I didn't like, and I found myself wanting to talk about it. 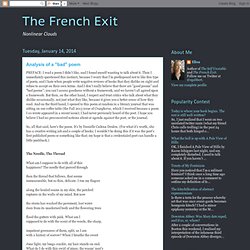 Then I immediately questioned this instinct, because I worry that I'm predisposed not to like this type of poem, and I hate when people write negative reviews of books that they dislike on sight and refuse to accept on their own terms. And I don't really believe that there are "good poems" and "bad poems"; you can't assess goodness without a framework, and we haven't all agreed upon a framework. But then, on the other hand, I respect and trust critics who talk about what they dislike occasionally, not just what they like, because it gives you a better sense of how they read.

And on the third hand, I opened to this poem at random in a literary journal that was sitting on our coffee table (the Fall 2013 issue of Crazyhorse, which I received because a poem I co-wrote appeared in a recent issue); I had never previously heard of the poet. Civil Disobedience, by Henry David Thoreau. Philosophy of Science, Vol. 15, No. 2 (Apr., 1948), pp. 135-175. Synopsis. Angelic Wisdom Concerning the Divine Love and the Divine Wisdom by Swedenborg. The Secret to Learning Anything: Albert Einstein’s Advice to His Son. Time Quotations. Quips and flippancy regarding time, calendars, clocks and so on (in no particular order) “History doesn’t repeat itself, but it rhymes.” 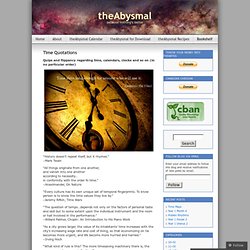 –Mark Twain “All things originate from one another, and vanish into one another according to necessity… in conformity with the order fo time.” –Anaximander, On Nature “Every culture has its own unique set of temporal fingerprints. “The question of tempo…depends not only on the factors of personal taste and skill but to some extent upon the individual instrument and the room or hall involved in the performance.” 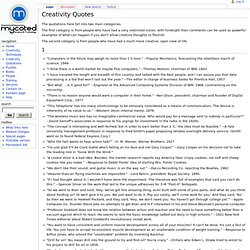 By the 1960s, publishers got a little less gun shy, and the covers, more risqué. See this 1964 Turkish version as an example. Or the image above, a Danish cover from 1963. The Covering Lolita Archive contains 185 book and media covers from 37 countries, spanning 56 years. Wordle - Beautiful Word Clouds. The Presence Portal. Content Delivery Network.