What is Computer Crimes Act 1997? - Intellectual Property - Knowledge Base - Lawyerment.com. The Act aims to provide for offenses relating to the misuse of computers. 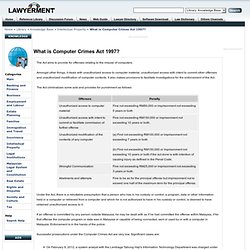 Amongst other things, it deals with unauthorized access to computer material, unauthorized access with intent to commit other offenses and unauthorized modification of computer contents. It also makes provisions to facilitate investigations for the enforcement of the Act. Explain that stuff! List of articles about communications technology. NeWeb. 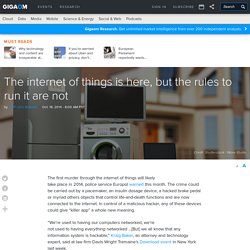 The crime could be carried out by a pacemaker, an insulin dosage device, a hacked brake pedal or myriad others objects that control life-and-death functions and are now connected to the internet. In control of a malicious hacker, any of these devices could give “killer app” a whole new meaning.

RDFa. MedIT. QR Y. How to Make Your Personal QR Code. Ever since I installed a barcode scanner app on my phone, I see QR codes everywhere--so naturally I wanted one of my own. 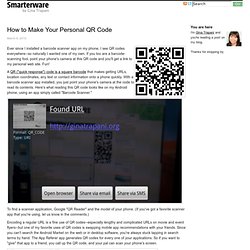 If you too are a barcode-scanning fool, point your phone's camera at this QR code and you'll get a link to my personal web site. Fun! A QR ("quick response") code is a square barcode that makes getting URLs, location coordinates, any text or contact information onto a phone quickly. With a barcode scanner app installed, you just point your phone's camera at the code to read its contents. Here's what reading this QR code looks like on my Android phone, using an app simply called "Barcode Scanner. " To find a scanner application, Google "QR Reader" and the model of your phone. Encoding a regular URL is a fine use of QR codes--especially lengthy and complicated URLs on movie and event flyers--but one of my favorite uses of QR codes is swapping mobile app recommendations with your friends. I made it. I own it. Please don't steal it. G. Roger Denson: Matthew Weinstein: When the Revolution Comes, It Will Be a 3D Animation Entertainment With Art Merchandizing.

This is the second in a series on visual artists who have embraced, redefined and subverted the computer-generated imaging (CGI) and 3D-simulation modeling originally developed to compose special effects graphics and animation in mainstream film, video, gaming, and high end advertising. 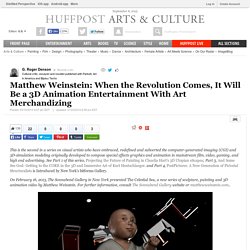 See Part 1 of this series, Projecting the Future of Painting in Claudia Hart's 3D Utopian eScapes; Part 3, And Some See God: Getting to the CORE in the 3D and Immersive Art of Kurt Hentschlaeger. and Part 4, PostPictures: A New Generation of Pictorial Structuralists is Introduced by New York's bitforms Gallery. CyberPsychologist. Speech To Text & Video Transcription Services. EncryptAllthethimgs.net. Cryptix. The Huge, Unseen Operation Behind the Accuracy of Google Maps.

Inside Atlas, Google’s map-editing program, operators can see where Street View cameras have captured images (colored dots), and zoom in with a spyglass tool. 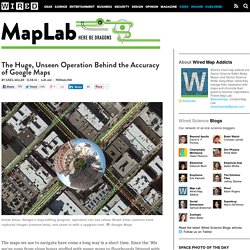 Google Maps. How To Buy New Must-Have Products For Next To Nothing. Last Updated: 4/09/2014 20:12 PST Few things match the thrill of getting an incredible deal on an item we really crave. 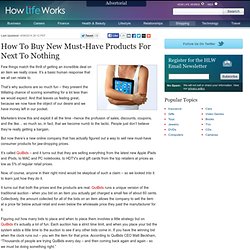 It’s a basic human response that we all can relate to. That’s why auctions are so much fun – they present the titillating chance of scoring something for a lot less than we would expect. And that leaves us feeling great, because we now have the object of our desire and we have money left in our pocket. Marketers know this and exploit it all the time –hence the profusion of sales, discounts, coupons, and the like… so much so, in fact, that we become numb to the tactic. Firefox to iPhone: It’s You, Not Me. In today’s mobile news roundup: Firefox not to appear in iOS devices anytime soon; InSight app comes to Google Glass; Galaxy SIV photo leaks; Unicorn Apocalypse is real; and Phone unlock ban won’t be a problem for AT&T clients.

Firefox not to appear in iOS devices anytime soon Along with Internet Explorer and Chrome, Mozilla’s Firefox is one of the most used browsers. But unlike Google, which has made Chrome available for iOS users, Mozilla isn’t about to jump on the mobile bandwagon, and you have Apple to thank for it. Apple is using Nitro JavaScript engine for the mobile version of it Safari browser, which makes the mobile browser quite fast.