The Benefits of the Recitation of Certain Surahs. The importance of reciting, studying and contemplating on the verses of the Holy Qur'an cannot be stressed enough. 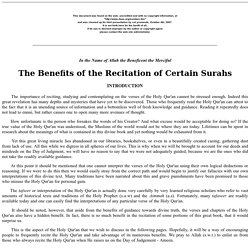 Indeed this great revelation has many depths and mysteries that have yet to be discovered. Those who frequently read the Holy Qur'an can attest to the fact that it is an unending source of information and a bottomless well of fresh knowledge and guidance. Reading it repeatedly does not lead to ennui, but rather causes one to open many more avenues of thought. How unfortunate is the person who forsakes the words of his Creator? And what excuse would be acceptable for doing so? Yet this great living miracle lies abandoned in our libraries, bookshelves, or even in a beautifully created casing; gathering dust from lack of use. At this point it should be mentioned that one cannot interpret the verses of the Holy Qur'an using their own logical deductions or reasoning. Quran Tafsir. Islam. Sacrificing Our Daughters: On the Psychology of Islamic Rape-Gangs. In Great Britain, young white girls are being drugged, gang-raped, and tortured by Muslim men. 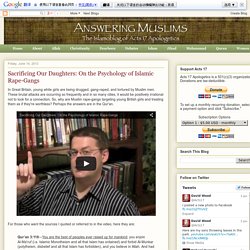 These brutal attacks are occurring so frequently and in so many cities, it would be positively irrational not to look for a connection. So, why are Muslim rape-gangs targeting young British girls and treating them as if they're worthless? Perhaps the answers are in the Qur'an. For those who want the sources I quoted or referred to in the video, here they are: Qur’an 3:110—You are the best of peoples ever raised up for mankind; you enjoin Al-Ma'ruf (i.e. 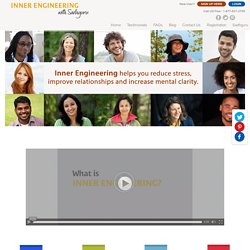 Albalagh Home Page. Meaning of Iman, Islam and Ihsan - Islam web - English. Praise be to Allah, the Lord of the Worlds; and may His blessings and peace be upon our Prophet Muhammad and upon all his Family and Companions. 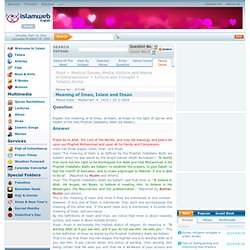 " Islam: Taqiyya and Lying. Additional Notes: Muslims are allowed to lie to unbelievers in order to defeat them. 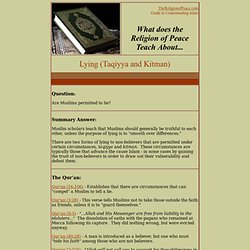 The two forms are: Taqiyya - Saying something that isn't true. Kitman - Lying by omission. An example would be when Muslim apologists quote only a fragment of verse 5:32 (that if anyone kills "it shall be as if he had killed all mankind") while neglecting to mention that the rest of the verse (and the next) mandate murder in undefined cases of "corruption" and "mischief. " Though not called Taqiyya by name, Muhammad clearly used deception when he signed a 10-year treaty with the Meccans that allowed him access to their city while he secretly prepared his own forces for a takeover. Ourpaper site for muslims who love Allah and Jihad. Khalifah site for Muslims who love Allah and Jihad. Just Islam : The True Meaning of Jihad. True jihad represents the spirit of inner struggle to lead a godly life. “Let not your hatred of other men turn you away from justice. 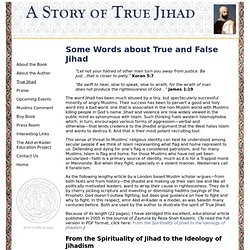 Be just…that is closer to piety.” Koran 5:7“Be swift to hear, slow to speak, slow to wrath, for the wrath of man does not produce the righteousness of God…” James 1:19 The word jihad has been much abused by a tiny, but spectacularly successful minority of angry Muslims. Their success has been to pervert a good and holy word into a bad word, one that is associated in the non-Muslim world with Muslims killing people in God’s name. Jihad and violence are now widely viewed in the public mind as synonymous with Islam. This sense of threat to Muslims’ religious identity can best be understood among secular people if we think of Islam representing what flag and home represent to us.

As the following lengthy article by a London based Muslim scholar argues—from both texts and from history—the jihadist are making up their own law and like all politically motivated leaders, want to wrap their cause in righteousness. Reza Shah-Kazemi Dr. The Concept of Jihad. By Maulana Wahiduddin Khan Jihad is regularly misconstrued as war, with all its connotations of violence and bloodshed. 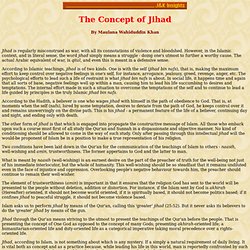 However, in the Islamic context, and in literal sense, the word jihad simply means a struggle - doing one's utmost to further a worthy cause. Sacred Paths. Holy Words. Islamic Information & Products - SoundVision.com home! Commander of the Faithful, a book about Emir Abd el-Kader. Mascara around 1830 History, according to the truism, is written by the victors. 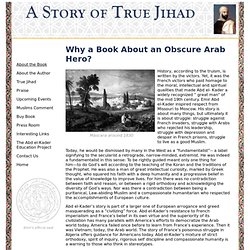 Yet, it was the French victors who paid homage to the moral, intellectual and spiritual qualities that made Abd el- Kader a widely recognized “ great man” of the mid 19th century. Emir Abd el-Kader inspired respect from Missouri to Moscow. His story is about many things, but ultimately it is about struggle: struggle against French invaders, struggle with Arabs who rejected his leadership, struggle with depression and despair in French prisons, struggle to live as a good Muslim. Today, he would be dismissed by many in the West as a “fundamentalist”-- a label signifying to the secularist a retrograde, narrow-minded, extremist. Abd el-Kader’s story is part of a larger one of European arrogance and greed masquerading as a “civilizing” force.