The Morality of Global Giving. Before last December, few americans had heard of Jan Egeland. 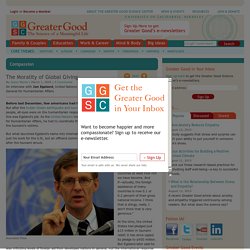 But after the Indian Ocean earthquake and tsunami afﬂicted millions of people, all eyes were on the humanitarian response to the disaster, and this was Egeland’s job. As the United Nations Under-Secretary-General for Humanitarian Affairs, he had to coordinate the international aid for the tsunami’s victims. But what launched Egeland’s name into international headlines wasn’t just his work for the U.N., but an offhand comment he made the day after the tsunami struck. Associated Press “It is beyond me why we are so stingy, really,” Egeland told reporters. At the time, the United States had pledged just $15 million in tsunami relief; it has since upped its pledge to $950 million.

It was too late. Except Egeland wasn’t misinformed. Some critics responded to Egeland by saying that private donations from U.S. citizens and corporations make up for its shortcomings in public aid. Memento. @ Ack! Earth’s Longest Night: Myth and Mystery of the Winter Solstice. It’s that most wonderful time of the year, as singer Andy Williams famously reminded us through his pop-holiday caroling. 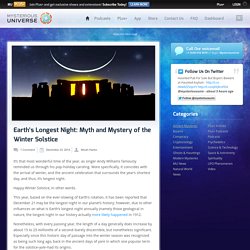 More specifically, it coincides with the arrival of winter, and the ancient celebration that surrounds the year’s shortest day, and thus, it’s longest night. Happy Winter Solstice, in other words. This year, based on the ever-slowing of Earth’s rotation, it has been reported that December 21 may be the longest night in our planet’s history; however, due to other influences on what is Earth’s longest night annually (namely those geological in nature, the longest night in our history actually more likely happened in 1912. Nonetheless, with every passing year, the length of a day generally does increase by about 15 to 25 millionths of a second–barely discernible, but nonetheless significant.

Though truly, the term is probably derived from the Old Norse jól, which signified the 12-day winter celebration from which the famous “Twelve Days of Christmas” was also derived. The Myth of Self Reliance. A mass emailing went out a while back from a prominent permaculturist looking for “projects where people are fully self sufficient in providing for their own food, clothing, shelter, energy and community needs. . .” 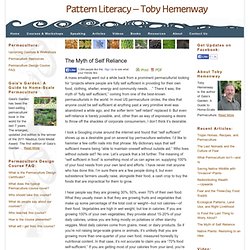 There it was, the myth of “fully self sufficient,” coming from one of the best-known permaculturists in the world. In most US permaculture circles, the idea that anyone could be self sufficient at anything past a very primitive level was abandoned a while ago, and the softer term “self reliant” replaced it. But even self-reliance is barely possible, and, other than as way of expressing a desire to throw off the shackles of corporate consumerism, I don’t think it’s desirable.

I took a Googling cruise around the internet and found that “self sufficient” shows up as a desirable goal on several top permaculture websites. I’d like to hammer a few coffin nails into that phrase. I hear people say they are growing 30%, 50%, even 70% of their own food. Jackie’s Tips For Hardcore Homesteading By Jackie Clay. Many of us have a garden and enjoy fresh vegetables during the summer and fall. 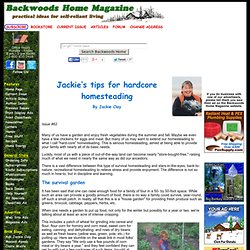 Maybe we even have a few chickens for eggs and meat. But many of us may want to extend our homesteading to what I call "hard-core" homesteading. This is serious homesteading, aimed at being able to provide your family with nearly all of its basic needs. Luckily, most of us with a piece of out-of-the-way land can become nearly "store-bought-free," raising much of what we need in nearly the same way as did our ancestors.

There is a vast difference between this type of survival homesteading and stars-in-the-eyes, back-to-nature, recreational homesteading to relieve stress and provide enjoyment. The survival garden It has been said that one can raise enough food for a family of four in a 50- by 50-foot space. When one needs a garden to put up food, not only for the winter but possibly for a year or two, we're talking about at least an acre of intense cropping. You can't grow everything, everywhere. How To Start Homesteading. You might live in the city or the country. 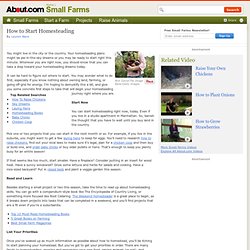 Your homesteading plans might be pie-in-the-sky dreams or you may be ready to start right this minute. Wherever you are right now, you should know that you can take a step toward your homesteading dreams today. It can be hard to figure out where to start. You may wonder what to do first, especially if you know nothing about owning land, farming, or going off-grid for energy. I'm hoping to demystify this a bit, and give you some concrete first steps to take that will begin your homesteading journey right where you are. You’d Never Live Here Because It’s Too Small, Right? Step Inside… Yep. Thought So. Diatomaceous Earth (food grade): Bug Killer You Can Eat!