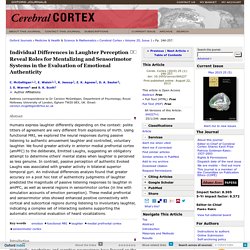 However, in recent years, there has been increasing interest in characterizing the perception of positive emotions, including laughter. Laughter has been identified in several mammal species (Panksepp 2000, 2005; Panksepp and Burgdorf 2000, 2003; Ross et al. 2009, 2010; Davila-Ross et al. 2011), and in humans was found to be the only positive vocal emotional expression recognized across culturally and geographically distinct groups (Sauter et al. 2010). The spontaneous laughter seen when chimpanzees are tickled or playing differs from that in response to the laughter of other chimpanzees (Davila-Ross et al. 2011). Laughter – the ordinary and the extraordinary. Human vocal emotional expression includes both emotionally inflected speech, and non-verbal emotional vocalisations, like a scream or a sob. 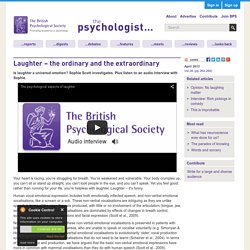 These non-verbal vocalisations are intriguing as they are unlike speech in terms of the ways they are produced, with little or no involvement of the articulators (tongue, jaw, soft palate, lips). Instead these vocalisations are dominated by effects of changes in breath control, subglottal pressure, laryngeal tensions and facial expression (Scott et al., 2009). Notably, involuntary production of these non-verbal emotional vocalisations is preserved in patients with bilateral damage to speech motor areas, who are unable to speak or vocalise voluntarily (e.g. Simonyan & Horwitz, 2011). 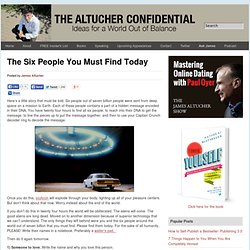 Six people out of seven billion people were sent from deep space on a mission to Earth. 4 Multiplicities. Peeps. Slanguage. Saving Yourself in a Crowd. Naturalopy Books - OneDrive. Naturalopy. Humans Are Free. I Like The Big Bang Theory, Because Communism. Transhumanism Has a Conspiracy Theory Problem. Zoltan Istvan is a futurist, journalist, and author of the novel The Transhumanist Wager. 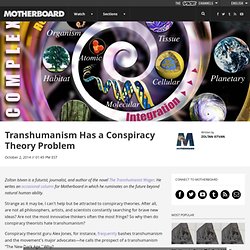 He writes an occasional column for Motherboard in which he ruminates on the future beyond natural human ability. Random Acts of Kindness. Survey Reveals Holiday Spending Habits - NextAdvisor Blog. It’s that joyous time of year when Americans will spend billions on gifts for loved ones and friends. 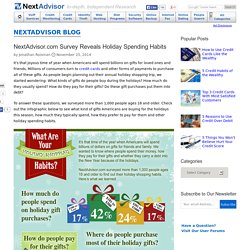 Millions of consumers turn to credit cards and other forms of payments to purchase all of these gifts. As people begin planning out their annual holiday shopping trip, we started wondering: What kinds of gifts do people buy during the holidays? The Nostalgia Machine. Skill Tests - Smarterer. Straight Dope Message Board - Powered by vBulletin. Buffer - FAQ. So how fucked are we. There, I Fixed It - Redneck Repairs. Noble Titles for sale. Fake Titles - the site that lifts the lid. Purchase a Lord Title, Laird Title or Lady Title. Can I Buy a Title? 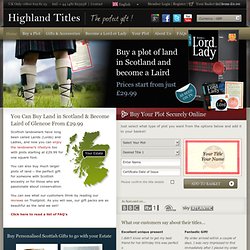 Owners of Scottish land have the legitimate right to assume the style of Laird, Lord or Lady, but it is impossible to simply ‘buy a title’. You should be wary if you come across a website offering titles for sale. Rock Paper Scissors for Digital Businesses. The growth of Social Media has elevated identity, privacy and big data to become vital topics for CIOs and CMOs of online businesses. 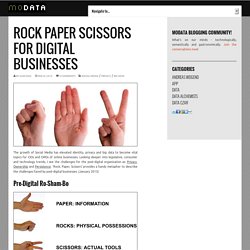 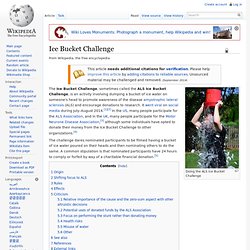 It went viral on social media during July–August 2014.[1][2] In the US, many people participate for the ALS Association, and in the UK, many people participate for the Motor Neurone Disease Association,[3] although some individuals have opted to donate their money from the Ice Bucket Challenge to other organizations.[4] The challenge dares nominated participants to be filmed having a bucket of ice water poured on their heads and then nominating others to do the same. A common stipulation is that nominated participants have 24 hours to comply or forfeit by way of a charitable financial donation.[5] Papercut Suicide. Work Harder, Not Smarter. - demotivational posters. The Daily Mash. Hedonist International. Silly. Windows 8.1 and Windows Server 2012 R2 privacy statement.

Connecting Bloggers. The forgotten language of flowers. In the early 18th century the Turkish "Secret Language of Flowers" was introduced to Europe by Lady Mary Wortley Montague, wife of the British ambassador to Constantinople. 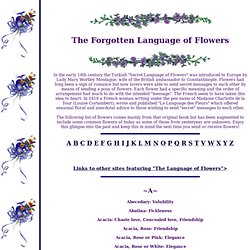 Flowers had long been a sign of romance but now lovers were able to send secret messages to each other by means of sending a posy of flowers. Each flower had a specific meaning and the order of arrangement had much to do with the intended "message". The French seem to have taken this idea to heart. In 1819 a French woman writing under the pen name of Madame Charlotte de la Tour (Louise Cortambert), wrote and published "Le Language des Fleurs" which offered seasonal floral and anecdotal advice to those wishing to send "secret" messages to each other.

Divers can talk to dolphins, perhaps aliens, with new device. An unlikely partnership between a dolphinologist and an artificial intelligence specialist has led to the development of a piece of hi-tech gadgetry that may allow humans and dolphins to talk to one another for the first time, according to the Independent. 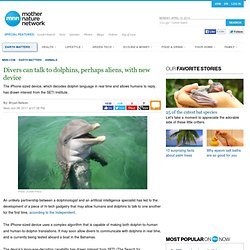 The iPhone-sized device uses a complex algorithm that is capable of making both dolphin-to-human and human-to-dolphin translations. It may soon allow divers to communicate with dolphins in real time, and is currently being tested aboard a boat in the Bahamas. The device's language-decoding capability has drawn interest from SETI (The Search for Extraterrestrial Intelligence), and may play a role in one day communicating with extraterrestrials, should they ever be contacted. Dr. Denise Herzing, dolphinologist and co-developer of the device, is already running workshops with SETI on how to identify non-human intelligence. Streamline communication, for good. APHELIS : An iconographic and text archive related to communication, technology and art. About Aphelis.net. ☛ About This website is a research blog about the loose ends of the ideals of community.

It also acts as an archive of items related to communication, technology and art. It provides adequate source attribution for each and every one of its entries. “Ideals of community” refer to the various beliefs either that human beings once have live together harmoniously (nostalgia for a lost community) or that it is their upcoming destiny (hope in the coming community). Check Out io9's New Design! The Specious Report. Mindless meanderings - Mindless Meanderings. Sarcasm Society - Sarcasm, Sarcastic Quotes, Irony, Satire. The Humor Magazine Est 1970. Computer Stupidities.

The Daily Mash. The founding story — 100CAMERAS. 100cameras was co-founded by four women in 2008 on the premise that a child sees the world differently than adults.They believed a child could take a camera into their own community and capture stories of the world around them in ways an older or outside photographer could not. And they were confident these stories could change lives, both within the community and around the world. In late 2008, the concept was first tested when one of the friends went to South Sudan and gave cameras to kids at an orphanage.

The photos that returned were remarkable. In a hard place that most would call hopeless, these images told a different story: one full of life, hope, and joy. Our four friends wanted to share the stories of these kids with their friends. History100pagesStripper - The Costumer's Manifesto. 20 controversial magazine covers - Media.

5 Mental Tricks for Getting Over Yourself. All Kinds. Modern Culture. Crowd Source Controls. Internetworking. Societal Gumbo.