One Tool Among Many: The Place of Vipassana in Buddhist Practice. What exactly is vipassana? 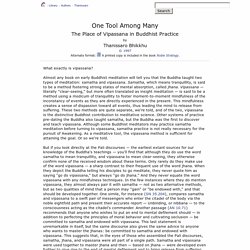 Almost any book on early Buddhist meditation will tell you that the Buddha taught two types of meditation: samatha and vipassana. Samatha, which means tranquillity, is said to be a method fostering strong states of mental absorption, called jhana. Vipassana — literally "clear-seeing," but more often translated as insight meditation — is said to be a method using a modicum of tranquillity to foster moment-to-moment mindfulness of the inconstancy of events as they are directly experienced in the present. This mindfulness creates a sense of dispassion toward all events, thus leading the mind to release from suffering. Selected Titles from the Buddhist Publication Society. The following titles from the Buddhist Publication Society are currently available on Access to Insight. 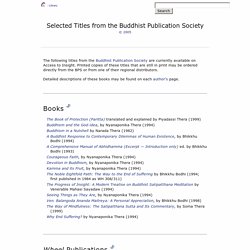 Printed copies of these titles that are still in print may be ordered directly from the BPS or from one of their regional distributors. Detailed descriptions of these books may be found on each author's page. Help!: Tools to help you find what you're looking for. PDF Documents. Access to Insight. Wings to Awakening: Part III. As we noted in the Introduction, all of the 37 factors listed in the Wings to Awakening can be subsumed under the five faculties. 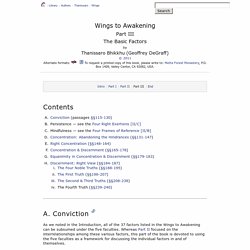 Practicum. Greater Good in Action. Why You Should Try It Research suggests that humans have a deeply rooted propensity to be kind and generous, but some obstacles can prevent us from acting on those altruistic impulses. 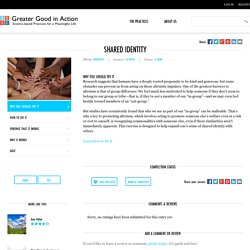 One of the greatest barriers to altruism is that of group difference: We feel much less motivated to help someone if they don’t seem to belong to our group or tribe—that is, if they’re not a member of our “in-group”—and we may even feel hostile toward members of an “out-group.” But studies have consistently found that who we see as part of our “in-group” can be malleable. That’s why a key to promoting altruism, which involves acting to promote someone else’s welfare even at a risk or cost to oneself, is recognizing commonalities with someone else, even if those similarities aren’t immediately apparent.

This exercise is designed to help expand one's sense of shared identity with others. Learn How to Do It. Greater Good in Action. Why You Should Try It In our day-to-day lives, it's easy to get caught up in the things that go wrong and feel like we're living under our own private rain cloud; at the same time, we tend to adapt to the good things and people in our lives, taking them for granted. 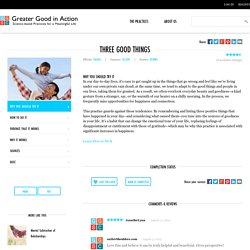 As a result, we often overlook everyday beauty and goodness--a kind gesture from a stranger, say, or the warmth of our heater on a chilly morning. In the process, we frequently miss opportunities for happiness and connection. This practice guards against those tendencies. By remembering and listing three positive things that have happened in your day--and considering what caused them--you tune into the sources of goodness in your life. Expanding the Science and Practice of Gratitude. For too long, we’ve taken gratitude for granted. 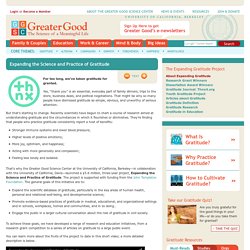 Yes, “thank you” is an essential, everyday part of family dinners, trips to the store, business deals, and political negotiations. That might be why so many people have dismissed gratitude as simple, obvious, and unworthy of serious attention. But that’s starting to change. LSS2005.pdf. What is Integrative Body-Mind Training? (with pictures) Short-term meditation training improves attention and self-regulation. Author Affiliations Contributed by Michael I. 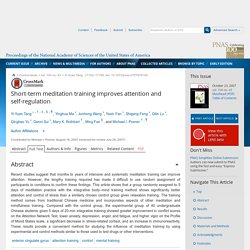 Posner, August 16, 2007 (received for review July 26, 2007) Abstract Recent studies suggest that months to years of intensive and systematic meditation training can improve attention. Body-mind Meditation Boosts Performance, Reduces Stress. A team of researchers from China and the University of Oregon have developed an approach for neuroscientists to study how meditation might provide improvements in a person's attention and response to stress. 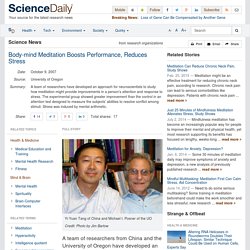 The study, done in China, randomly assigned college undergraduate students to 40-person experimental or control groups. The experimental group received five days of meditation training using a technique called the integrative body-mind training (IBMT). The control group got five days of relaxation training. Before and after training both groups took tests involving attention and reaction to mental stress. The experimental group showed greater improvement than the control in an attention test designed to measure the subjects' abilities to resolve conflict among stimuli. Blue Mountain Center of Meditation & Nilgiri Press. | Home| Thought for the Day “We all need joy, and we can all receive joy in only one way, by adding to the joy of others.” 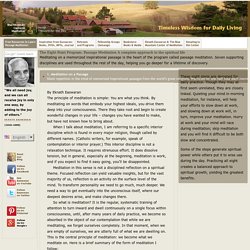 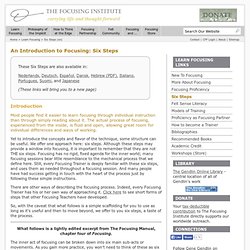 The actual process of focusing, experienced from the inside, is fluid and open, allowing great room for individual differences and ways of working. Yet to introduce the concepts and flavor of the technique, some structure can be useful. We offer one approach here: six steps. Although these steps may provide a window into focusing, it is important to remember that they are not THE six steps.

How to Focus and Get a Felt Sense: 12 Steps. Edit Article Focusing is a mode of inward bodily attention that most people don’t know about yet. It was first developed in 1960-early 70s by Eugene Gendlin and others in Chicago, following on work with Carl Rogers and Richard McKeon. The Focusing Institute.

2 Do. Two Keys for Regulating Your Breathing and Circulating Qi.

Μῆτις. Testy. Martial Artistry. The Referential Process. The above graph depicts a session of psychoanalysis. Areas where the green line (which depicts Referential Activity using the Weighted Referential Activity Dictionary) is at a peak, and the blue line (which shows the speaker's use of reflection words, e.g. think, plan, reason) is in a valley, indicate moments when the speaker is immersed in the narrative she is telling. Follow these links for more information about the Discourse Attributes Analysis Program that was used to generate this graph, and Wilma Bucci's Multiple Code Theory and theory of the Referential Process, which serve as the theoretical basis for these measures.

Click on the graph for an enlarged view. How to Teach an Inductive Learning Lesson. Sure, you’ve heard that we shouldn’t just spoon-feed information to our students, but what exactly should we be doing instead? One possibility is inductive learning. Inductive learning takes the traditional sequence of a lesson and reverses things. Instead of saying, “Here is the knowledge; now go practice it,” inductive learning says, “Here are some objects, some data, some artifacts, some experiences…what knowledge can we gain from them?” How to turn "water" into marbles - StumbleUpon. One-Dumbbell Workout For Total-Body Toning. Endocrine Awareness Center for Health. The Adrenal Glands The adrenal glands also known as the suprarenal glands sit on top of the kidneys. The right adrenal gland is triangular shaped, while the left suprarenal gland is semilunar shaped.