Data Protection. Legal Issues in Cyber Security 2015. Legal issues in Cyber Security. Major security hole allows Apple passwords to be reset with only email address, date of birth (update) LulzSec. Background and history Some in the security community contended that the group raised awareness of the widespread lack of effective security against hackers.[17] They were credited with inspiring LulzRaft, a group implicated in several high-profile website hacks in Canada.[18] Former members and associates LulzSec consisted of seven core members.[22] The online handles of these seven were established through various attempts by other hacking groups to release personal information of group members on the internet, leaked IRC logs published byThe Guardian, and through confirmation from the group itself.[27] 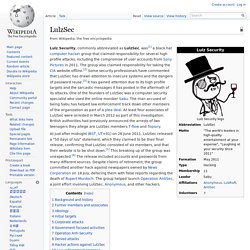 Privacy Groups Pan Cameron’s Encryption Proposals as Unworkable. Cameron wants to ban encryption – he can say goodbye to digital Britain. On Monday David Cameron managed a rare political treble: he proposed a policy that is draconian, stupid and economically destructive. 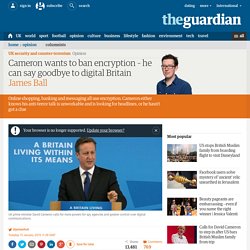 The prime minister made comments widely interpreted as proposing a ban on end-to-end encryption in messages – the technology that protects online communications, shopping, banking, personal data and more. “[I]n our country, do we want to allow a means of communication between people which we cannot read?” , the prime minister asked rhetorically. The top 10 data breaches of the past 12 months. Most Internet users are accustomed to changing their online passwords regularly. 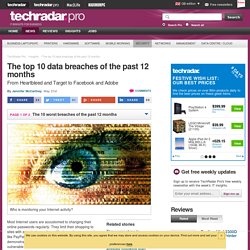 They limit their shopping to sites with a trusted security certificate, and use companies like PayPal for safe transactions. But the last year has demonstrated that even the most cautious user is vulnerable to data breaches that can lead to fraud and identity theft. Staples Estimates Hackers Breached 1.16 Million Credit Cards. In North Korea, hackers are a handpicked, pampered elite. Cyber Security. Cyberspace Privacy. NeWeb Privacy. Internet tools. NeWeb Modules. Web World Things. Dead Drops. Ethical Hacking. Ethical Hacking. Cybersecurity. 9 Tips to Stay Safe on Public Wi-Fi. Your bank calls you to verify your recent $750 bill at an out-of-state Taco Bell, but you haven’t left town in weeks. 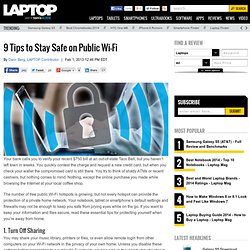 You quickly contest the charge and request a new credit card, but when you check your wallet the compromised card is still there. You try to think of shady ATMs or recent cashiers, but nothing comes to mind. Nothing, except the online purchase you made while browsing the Internet at your local coffee shop. The number of free public Wi-Fi hotspots is growing, but not every hotspot can provide the protection of a private home network. How to Crack a Wi-Fi Network. 1.Back Track Today we’re going to run down, step-by-step, how to crack a Wi-Fi network with WEP security turned on. Most Common Passwords. Roleplay. 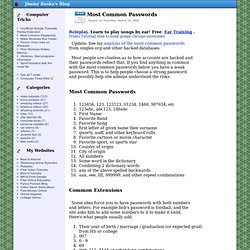 Learn to play songs by ear! YouTube. 3 Best Resources To Find Known Sites With Spyware & Viruses. Malware causes worldwide economic damage in the multi-billion dollar range and even though users are ever more aware of good security practices, it continues to be a head-to-head race between malicious software and the defense against it. 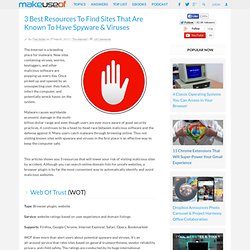 Many users catch malware through browsing online. Thus not visiting known sites with spyware and viruses in the first place is an effective way to keep the computer safe. This articles shows you 3 resources that will lower your risk of visiting malicious sites by accident. Although you can search online domain lists for unsafe websites, a browser plugin is by far the most convenient way to automatically identify and avoid malicious websites. 7 Ways to Stop NSA Spying on Your Smartphone – Tom's Guide. Recently uncovered PowerPoint slides used by the National Security Agency and its British equivalent indicate that the spy agencies have been intercepting personal data sent by "leaky" smartphone apps. 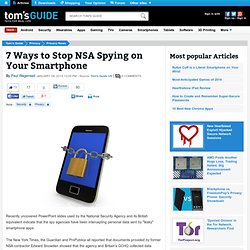 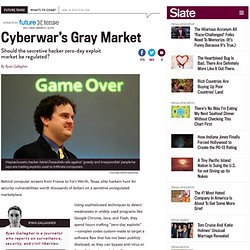 Behind computer screens from France to Fort Worth, Texas, elite hackers hunt for security vulnerabilities worth thousands of dollars on a secretive unregulated marketplace. Ryan Gallagher is a journalist who reports on surveillance, security, and civil liberties. Follow. CWE/SANS TOP 25 Most Dangerous Software Errors. What Errors Are Included in the Top 25 Software Errors? 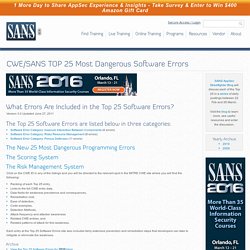 Version 3.0 Updated June 27, 2011 The Top 25 Software Errors are listed below in three categories: The New 25 Most Dangerous Programming Errors The Scoring System The Risk Management System. Tokenized data. Banks push for tokenization standard to secure credit card payments. A group representing 22 of the world's largest banks is pushing for broad adoption in the U.S. of payment card technology called tokenization, citing shortcomings in the planned migration to the Europay MasterCard Visa (EMV) smartcard standard over the next two years. 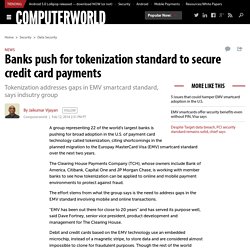 The Clearing House Payments Company (TCH), whose owners include Bank of America, Citibank, Capital One and JP Morgan Chase, is working with member banks to see how tokenization can be applied to online and mobile payment environments to protect against fraud. The effort stems from what the group says is the need to address gaps in the EMV standard involving mobile and online transactions. "EMV has been out there for close to 20 years" and has served its purpose well, said Dave Fortney, senior vice president, product development and management for The Clearing House. While the planned migration has its benefits, EMV is not quite the panacea that many assume it is, Fortney said. Burp Suite. Burp Suite is an integrated platform for performing security testing of web applications. Its various tools work seamlessly together to support the entire testing process, from initial mapping and analysis of an application's attack surface, through to finding and exploiting security vulnerabilities.

Burp gives you full control, letting you combine advanced manual techniques with state-of-the-art automation, to make your work faster, more effective, and more fun. Burp Suite contains the following key components: Largest Cyber-Attack in History Hits Pro-Hong Kong Protest Websites. Websites supporting the pro-democracy protesters in Hong Kong have been hit with a series of DDoS attacks which have been described as the largest in history. (Bobby Yip/Reuters) A series of cyber attacks against websites supporting Occupy Central protestors in Hong Kong have been described as the biggest cyber attacks ever recorded. 'Uncrackable' codes set for step up. 4 September 2013Last updated at 13:09 ET By Melissa Hogenboom Science reporter, BBC News Quantum cryptography is a way to share secret digital keys. 3 Internet of Things Security Nuances You May Not Have Considered. HTTPS Everywhere. Five Best Browser Security Extensions.