‘Neural Fingerprints’ of Memory Associations Hint at Mind Reading. Researchers have long been interested in discovering the ways that human brains represent thoughts through a complex interplay of electrical signals. 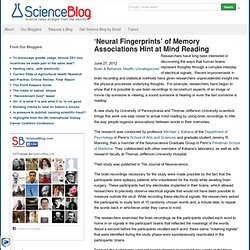 Recent improvements in brain recording and statistical methods have given researchers unprecedented insight into the physical processes underlying thoughts. For example, researchers have begun to show that it is possible to use brain recordings to reconstruct aspects of an image or movie clip someone is viewing, a sound someone is hearing or even the text someone is reading. A new study by University of Pennsylvania and Thomas Jefferson University scientists brings this work one step closer to actual mind reading by using brain recordings to infer the way people organize associations between words in their memories. The research was conducted by professor Michael J. Kahana of the Department of Psychology in Penn’s School of Arts and Sciences and graduate student Jeremy R.

Scientists are Reading Minds by Measuring Brain Activity. Brain decoding: Reading minds. Jack Gallant perches on the edge of a swivel chair in his lab at the University of California, Berkeley, fixated on the screen of a computer that is trying to decode someone's thoughts. 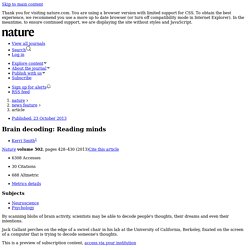 On the left-hand side of the screen is a reel of film clips that Gallant showed to a study participant during a brain scan. 5-HT receptor. Serotonin receptors are found in almost all animals and are even known to regulate longevity and behavioral aging in the primitive nematode, Caenorhabditis elegans.[4][5] Classification[edit] With the exception of the 5-HT3 receptor, a ligand-gated ion channel, all other serotonin receptors are G protein-coupled receptors that activate an intracellular second messenger cascade to produce an excitatory or inhibitory response. 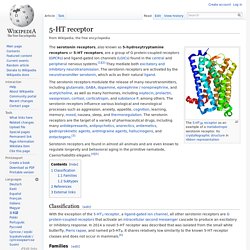 In 2014 a novel 5-HT receptor was described that was isolated from the small white butterfly, Pieris rapae, and named pr5-HT8. Neuropsychopharmacology - Grateful DREADDs: Engineered Receptors Reveal How Neural Circuits Regulate Behavior. Trust at first sight: evidence from ERPs. The results reported in the previous section concerned the ERPs elicited by the participants’ subjective judgments, independently of the pre-rated face category. 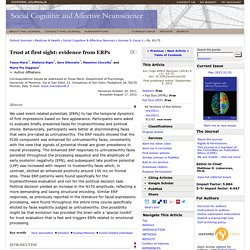 To investigate whether and to what extent these evaluations might depend on inherent properties of the presented faces, additional analyses on pre-rated trustworthy and untrustworthy faces (Face-category), independently of behavioural judgments, were carried out for different time windows. These ANOVAs were conducted factoring Trustworthiness-Face-category (Untrustworthy, Trustworthy) and Electrode (two electrodes, depending on the considered ERP component). Furthermore, separate ANOVAs were employed to analyze the trustworthiness effect when face judgments are congruent with the pre-rated face classification (e.g. untrustworthy faces judged congruently as untrustworthy). Antidepressant warnings tied to suicide attempts in youths.

NEW YORK (Reuters Health) - A move by U.S. health officials to warn the public of an increased risk of suicidal thoughts among young people taking antidepressants was actually associated with an increase in suicide attempts, suggests a new study. 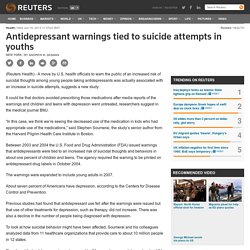 It could be that doctors avoided prescribing those medications after media reports of the warnings and children and teens with depression went untreated, researchers suggest in the medical journal BMJ. “In this case, we think we’re seeing the decreased use of the medication in kids who had appropriate use of the medications,” said Stephen Soumerai, the study’s senior author from the Harvard Pilgrim Health Care Institute in Boston.

Between 2003 and 2004 the U.S. Food and Drug Administration (FDA) issued warnings that antidepressants were tied to an increased risk of suicidal thoughts and behaviors in about one percent of children and teens. The agency required the warning to be printed on antidepressant drug labels in October 2004. Dr. Drugs for depressed children banned. Modern antidepressant drugs which have made billions for the pharmaceutical industry will be banned from use in children today because of evidence, suppressed for years, that they can cause young patients to become suicidal. 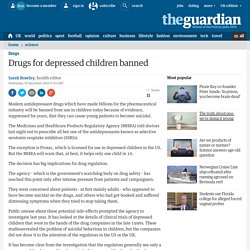 The Medicines and Healthcare Products Regulatory Agency (MHRA) told doctors last night not to prescribe all but one of the antidepressants known as selective serotonin reuptake inhibitors (SSRIs). The exception is Prozac, which is licensed for use in depressed children in the US. But the MHRA will warn that, at best, it helps only one child in 10. The decision has big implications for drug regulation. Depression drug ruled out for under-18s. The Government has decided to stop doctors prescribing another anti-depressant to under-18s because of reports of dangerous side-effects. 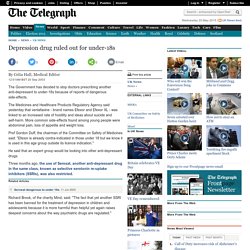 The Medicines and Healthcare Products Regulatory Agency said yesterday that venlafaxine - brand names Efexor and Efexor XL - was linked to an increased rate of hostility and ideas about suicide and self-harm. More common side-effects found among young people were abdominal pain, loss of appetite and weight loss. Seroxat safety advice to be changed. Experts are set to update the safety advice provided with the controversial antidepressant Seroxat. 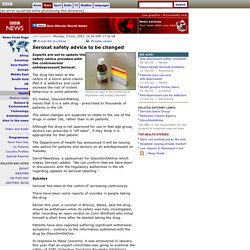 The drug has been at the centre of a storm amid claims that it is addictive and could increase the risk of violent behaviour in some patients. It's maker, GlaxoSmithKline, insists that it is a safe drug - prescribed to thousands of patients in the UK. The latest changes are expected to relate to the use of the drugs in under 18s, rather than in all patients. Although the drug is not approved for use in that age group, doctors can prescribe it "off label", if they think it is appropriate for that patient. The Department of Health has announced it will be issuing new advice for patients and doctors on an antidepressant on Tuesday. Cons. PRKRA. Protein kinase, interferon-inducible double stranded RNA dependent activator, also known as interferon-inducible double stranded RNA-dependent protein kinase activator A or Protein ACTivator of the interferon-induced protein kinase (PACT) is a protein that in humans is encoded by the PRKRA gene.[1][2][3] PACT heterodimerizes with and activates protein kinase R.[2][4] PRKRA mutations have been linked to a rare form of dystonia parkinsonism. [5] References[edit] Further reading[edit] 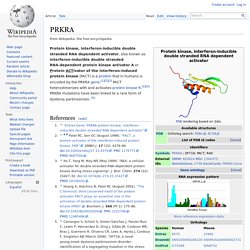 Thelancet. To view the full text, please login as a subscribed user or purchase a subscription. 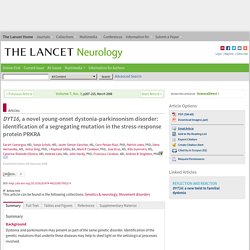 David Bellinger determined Americans have collectively forfeited as a result of exposure to lead, mercury, and organophosphate pesticides. In a 2012 paper published by the National Institutes of Health, Bellinger, a professor of neurology at Harvard Medical School, compared intelligence quotients among children whose mothers had been exposed to these neurotoxins while pregnant to those who had not. Bellinger calculates a total loss of 16.9 million IQ points due to exposure to organophosphates, the most common pesticides used in agriculture.

Last month, more research brought concerns about chemical exposure and brain health to a heightened pitch. “So you recommend that pregnant women eat organic produce?” “That’s what I advise people who ask me, yes. Landrigan had issued that same warning, unprompted, when I spoke to him the week before. Positive Neuroscience ~ News. Award-winning researchers to explore human flourishing from neural networks to social networks The Positive Psychology Center of the University of Pennsylvania and the John Templeton Foundation (www.templeton.org) have announced the recipients of the Templeton Positive Neuroscience Awards. The project will grant $2.9 million in award funding to 15 new research projects at the intersection of Neuroscience and Positive Psychology. The winning projects will help us understand how the brain enables human flourishing. They explore a range of topics, from the biological bases of altruism to the effects of positive interventions on the brain.

The Positive Neuroscience Project (www.posneuroscience.org) was established in 2008 by Professor Martin E.P. "Research has shown that positive emotions and interventions can bolster health, achievement, and resilience, and can buffer against depression and anxiety," said Seligman. James K. 2010 Templeton Positive Neuroscience Awards: Trinity College Institute of Neuroscience. Mitchell Laboratory. Semaphorin Function in the Mammalian Brain Semaphorins are a major family of conserved axon guidance molecules and are known to also regulate other aspects of neural development. Several subfamilies of semaphorins exist and we have been studying the functions of Class 6 semaphorins. These are transmembrane proteins, with a long cytoplasmic tail, and are thought to be capable of acting both as signals to other cells and as receptors on the surface of migrating neurons or axons.

Synaesthesia and savantism. “We only use 10% of our brain”. I don’t know where that idea originated but it certainly took off as a popular meme – taxi drivers seem particularly taken with it. It’s rubbish of course – you use more than that just to see. But it captures an idea that we humans have untapped intellectual potential – that in each of us individually, or at least in humans in general lies the potential for genius. It’s not the crime, it’s the cover-up: reactivity in the developing brain and the emergence of schizophrenia. NeuroscienceOfConation_Kolbe.Wigton_0512. New Mentality. A Neuroscientist's Radical Theory of How Networks Become Conscious. It’s a question that’s perplexed philosophers for centuries and scientists for decades: Where does consciousness come from?

We know it exists, at least in ourselves. But how it arises from chemistry and electricity in our brains is an unsolved mystery. Neuroscientist Christof Koch, chief scientific officer at the Allen Institute for Brain Science, thinks he might know the answer. According to Koch, consciousness arises within any sufficiently complex, information-processing system. All animals, from humans on down to earthworms, are conscious; even the internet could be. Cartes heuristiques et cerveaux ?

How ideas spread in the brain. Neurologist discovers 'dark patch' inside brains of killers and rapists. Top 10 Mysteries of the Mind. Men and women literally see the world differently. Guys' eyes are more sensitive to small details and moving objects, while women are more perceptive to color changes, according to a new vision study that suggests men and women actually do see things differently. Did parental love evolve separately in birds and mammals? 5 mind-bending facts about dreams. Scientists Find Brain's Irony-Detection Center! If You Hate Someone, Your Brain Sees Them Differently. Brain wave patterns can predict mistakes — Tri-City Psychology Services. Image credit:iStockphoto. Neuroscience of free will.