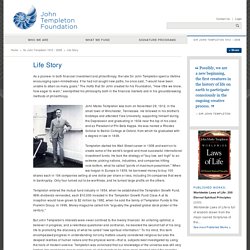 If he had not sought new paths, he once said, "I would have been unable to attain so many goals. " Maddox Jolie-Pitt Foundation Official Website. All about the Jolie-Pitt kids, All the time! Pax Humanitas. The Next Incarnation. The Dalai Lama’s birthday party, an event he has never much cared for, was set to begin at 9 A.M. on July 6th, in the Indian Himalayan town of Dharamsala, where he lives. 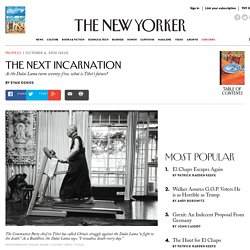 He skips the party most years, but he had promised to attend his seventy-fifth, so five thousand people turned up at the temple that morning, in a humid downpour, to await his arrival. The exiled spiritual and political leader of Tibet—His Holiness to Buddhists, and HHDL to his Twitter followers—settled in Dharamsala half a century ago, after rejecting China’s claims to his homeland and trekking over the mountains to India. He was followed by thousands of refugees, many of whom expected a short stay; when they were urged to plant trees in their settlements, they waved off the idea. “People said, ‘We’re going to be going back in a few years,’ ” Thubten Samphel, a writer and spokesman for the government in exile, recalled. “Trees will take fifty years to grow, so what’s the point?” Reincarnation. (Translated from the original Tibetan) Introduction My fellow Tibetans, both in and outside Tibet, all those who follow the Tibetan Buddhist tradition, and everyone who has a connection to Tibet and Tibetans: due to the foresight of our ancient kings, ministers and scholar-adepts, the complete teaching of the Buddha, comprising the scriptural and experiential teachings of the Three Vehicles and the Four Sets of Tantra and their related subjects and disciplines flourished widely in the Land of Snow. 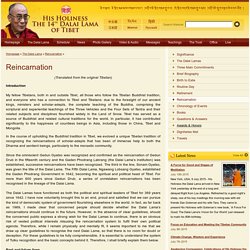 Busy Peeps. Sadhguru - In Conversation with the Mystic. “This life for me is an endeavor to help people experience and express their divinity. 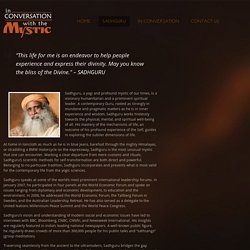 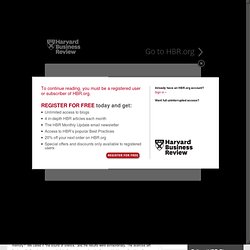 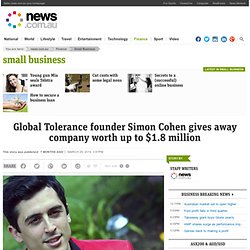 Source: Supplied IT’S a pipe dream for many people to quit the rat-race and give up work for good. But one founder of a global PR firm, who has worked with clients from the Dalai Lama to Wallace and Gromit and the Prince of Wales, is actually going through with it. List of peace activists. This list of peace activists includes people who've proactively advocated diplomatic, philosophical, and non-military resolution of major territorial or ideological disputes through nonviolent means and methods. 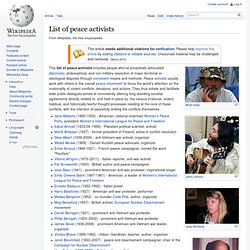 Peace activists usually work with others in the overall peace movement to focus the world's attention on the irrationality of violent conflicts, decisions, and actions. They thus initiate and facilitate wide public dialogues aimed at nonviolently altering long-standing societal agreements directly related to, and held in place by, the various irrational, violent, habitual, and historically fearful thought-processes residing at the core of these conflicts, with the intention of peacefully ending the conflicts themselves. Encyclopedia of Philosophy. This is Marilyn.com - Social Network for Marilyn Monroe Fans. From her platinum locks to her glamorous wardrobe, she set a standard for American beauty that no one else could match. 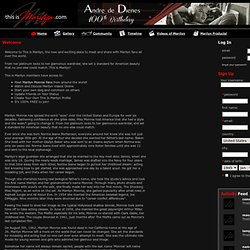 This is Marilyn! Marilyn Monroe has spread the word "wow" over the United States and Europe for over six decades. Rent the Chicken. Project 562 - Project 562- A Photo Project by Matika Wilbur documenting Native America. On January 18th 2014, Project 562 joined Quechan leaders and elders in prayerful opposition to the Ocotillo Wind Express Facility, responsible for the desecration of Ocotillo's Sacred Desert. 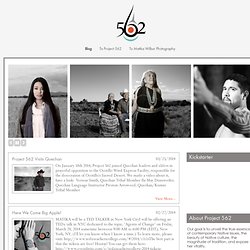 We made a video about it, have a look: Vernon Smith, Quechan Tribal Member Ila May Dunsweiler, Quechan Language Instructor Preston Arroweed, Quechan/Kumni Tribal Member MATIKA will be a TED TALKER in New York CityI will be offering an TEDx talk in NYC dedicated to the topic, "Agents of Change" on Friday, March 28, 2014 sometime between 9:00 AM to 6:00 PM (EDT), New York, NY. (I'll let you know when I know a time.) To learn more, please visit: best part is that the tickets are free! Hooray! Project 562 is currently accepting donations on Kickstarter until February 20 at 10PM (PST) here: you so much for all of your support! The best part about my work is having the opportunity to seek positivity and share that experience with you. Welcome to Global Trends. Wisdom of the Ancient Sages » Articles & Wisdom. Mystics, Sages, Saints and Gurus. The Psychophysiological Principle states: Any experience that you have, you have only while you are having a specific brain wave pattern. 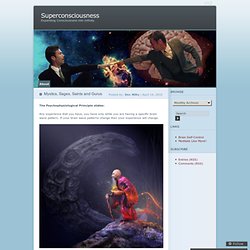 If your brain wave patterns change then your experience will change. Dr. Jeffrey D. Thompson, D.C., B.F.A did a preliminary study in these “Ecstatic” States of Consciousness, Epsilon, Gamma, HyperGamma, Lambda Brainwave Activity, following the previous premises this might be of interest: Brain mapping research studies into different brainwave patterns associated with different states of consciousness has been carried out in major centers throughout the country. In non-sleeping states, these brainwave patterns are associated with various states of “waking” consciousness. Studies here at the Center for Neuroacoustic Research have shown clear and repeated evidence, in patients, of brainwave frequency patterns below the traditionally accepted lowest Delta rhythms of 0.5 Hz.

Zen Master Dennis Genpo Merzel Roshi. This is truly valuable. Pandit Gopi Krishna ( Tantric “Sluts” or Living Goddesses: Why it Matters. With recent media revelations about ritual sex, nude yoga and “yogasms” – sex has become a hot topic in the yoga world. Well, in honour of Women’s History Month, I’m joining the fray. Because let’s face it, nothing is more juicy or salacious than the forgotten high priestesses of sex, the “debauched” yoginis of Tantra. While much conventional scholarship has designated these women as low-caste “sluts” exploited for ritual purposes, religious scholar Miranda Shaw has unearthed a very different history. Harpo and Lucy. They Did Not Give Up.

If what I feel were equally distributed to the whole human family, there would not be one cheerful face on the earth. " Ideas, anyone? Quotes. "And those who were seen dancing were thought to be insane by those who could not hear the music. " - Friedrich Nietzsche"Don't count the days, make the days count. " - Muhammad Ali"Those who underestimate me, overestimate themselves. " -- Pedrum Jamali. "Condemnation without investigation is the height of the ignorance. " -- Albert Einstein.

"You don't comb the mirror, you comb your own hair and the mirror changes. " -- David Icke. Dissent. 100th Meme Keys. Agree Ability. Quotatio.