What Can Bonobos Tell Us about Ourselves? When newspaper headlines recently screamed that both humans and chimpanzees are “natural born killers,” this was obviously hype. 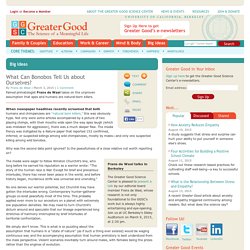 Not only were some articles accompanied by a picture of two playing chimps, with their mouths wide open the way apes laugh (which was mistaken for aggression), there was a much deeper flaw. The media frenzy was instigated by a Nature paper that reported 152 confirmed, inferred, or suspected killings among wild chimpanzees, mostly by males—and only one suspected killing among wild bonobos. Why was the second data point ignored? Is the peacefulness of a close relative not worth reporting on? The media were eager to follow Winston Churchill’s line, who long before he earned his reputation as a warrior wrote: “The story of the human race is War. No one denies our warrior potential, but Churchill may have gotten the interludes wrong.

We simply don’t know. Not only are bonobos ignored, they are actively pushed out of the picture. Lexicity. Discovering Ancient Egypt. ElAnt - Electronic Antiquity. Bygone Days. A Long Time Ago. Long Ago.

Welcome to The Ancient Web - The Ancient World's Great Civilizations. Old World Language Families. 2,000-Year-Old Mosaics Uncovered In Turkey Before Being Lost To Flooding. We usually write about new contemporary artists at Bored Panda, but these fascinating discoveries recently made by a team of archeologists in the Turkish city of Zeugma has given us the opportunity to witness the unveiling of Greek and Roman art that hasn’t been seen in thousands of years. 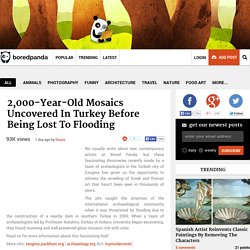 The site caught the attention of the international archaeological community when it was threatened by flooding due to the construction of a nearby dam in southern Turkey in 2000. When a team of archaeologists led by Professor Kutalmış Görkay of Ankara University began excavating, they found stunning and well-preserved glass mosaics rich with color. Read on for more information about this fascinating find! More info: zeugma.packhum.org | archaeology.org (h/t: mymodernmet) These stunning 2000-year-old mosaics were uncovered by archaeologists in the Turkish city of Zeugma Rich mosaics like these decorated people’s homes with characters from ancient Greek mythology.

Ancient Peoples. Per-Ankh: Ancient Egypt. Who Invented Yoga? History has always been important to me: history keeps me connected and history gives me perspective. 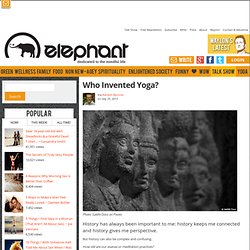 But history can also be complex and confusing. How old are our asanas or meditation practices? Answer: it depends, because there are so many expressions and schools of yoga. What was the social condition of India like during Buddha’s time? Answer: turbulent, because Buddha and many others were fed up with the prevailing Vedic/Hindu practices at the time: horse sacrifices, widow burning, the caste system.

Which philosophical system influenced Patanjali’s Yoga Sutras as well as Ayurveda the most? Answer: Samkhya, the world’s oldest philosophical system, developed by Kapila, perhaps as early as 1500 years before the birth of Christ. But how old is our asana practice? Many of the asanas practiced in today’s yoga studios are no more than about 80 years old. But yoga is more than just a set of East-West fitness poses. There is now genetic evidence the Aryans migrated to India about 5000 BCE. 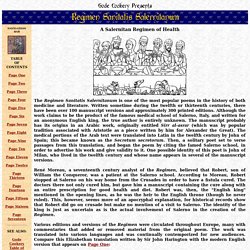 Written sometime during the twelfth or thirteenth centuries, there have been over 100 manuscript versions and approximately 300 printed editions. Although the work claims to be the product of the famous medical school of Salerno, Italy, and written for an anonymous English king, the true author is entirely unknown. The manuscript probably has its origins in an Arabic work, originally entitled Sirr al-asrar (which was by popular tradition associated with Aristotle as a piece written by him for Alexander the Great). Flail. In Latin there was a word that stood for 'a winnowing tool' or 'whip'. 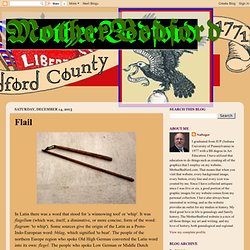 It was flagellum (which was, itself, a diminutive, or more concise, form of the word: flagrum: 'to whip'). Some sources give the origin of the Latin as a Proto-Indo-European word: bhlag, which signified 'to beat'. The people of the northern Europe region who spoke Old High German converted the Latin word into its own: flegel. The people who spoke Low German or Middle Dutch contrived the word: vlegel.

Old English used the Old High German form of flegel with a slight variation to become flighel or fligel. The flail was a tool used to separate useful grain seeds from husks and other unusable parts of the wheat or rye plant. The flexible connection between the two poles being the leather strip or hemp rope, the swingle could be swung in any direction. List of cities by time of continuous habitation. First People of America and Canada - Native American Indians. Turtle Island. Legends, Treaties, Clipart.