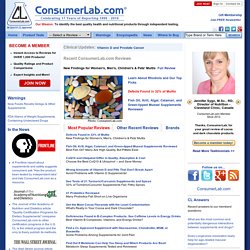 Many Are High Quality, But Pitfalls Exist CoQ10 and Ubiquinol Differ in Quality, Absorption & Cost Choose the Best CoQ10 & Ubiquinol -- and Save Money Wrong Amounts of Vitamin D and Pills That Don't Break Apart Avoid Problems with Vitamin D Supplements! See Tests of 21 Turmeric/Curcumin Supplements and Spices 33% of Turmeric/Curcumin Supplements Fail; Filthy Spices 41 Probiotics Reviewed Many Probiotics Fall Short on Live Organisms Get the Most Cocoa Flavanols with the Least Contamination What's Really in Your Cocoa and Dark Chocolate? 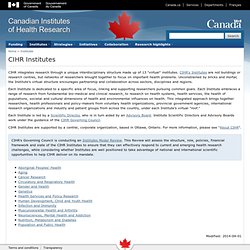 CIHR's Institutes are not buildings or research centres, but networks of researchers brought together to focus on important health problems. Unconstrained by bricks and mortar, the Institute's virtual structure encourages partnership and collaboration across sectors, disciplines and regions. Each Institute is dedicated to a specific area of focus, linking and supporting researchers pursuing common goals. British Medical Journal. National Center for Biotechnology Information. Centers for Disease Control and Prevention. Biological Health. Integrative Medicine.

Complementary Medicine. MEDICINE QUEST. Healing Herbal. Medica. Life & GTD. HOMEOPATHY. Psychosomatica. Food Water Exercise. Food Frights. GMO's, Good for Whom? Testy. Urinalyses. Types of epileptic seizures. Whether you, or someone you know, has had a single seizure or has been diagnosed with epilepsy, it may help to identify the type of seizures that are relevant to you, and how they affect you. 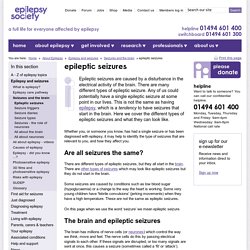 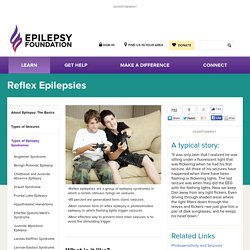 Reflex epilepsies are a group of epilepsy syndromes in which a certain stimulus brings on seizures. The stimulus can be something simple in the environment or something more complex like reading, writing, doing arithmetic, or even thinking about specific topics. Thalamocortical oscillations. Oscillatory activity is an emerging property of the thalamocortical system. 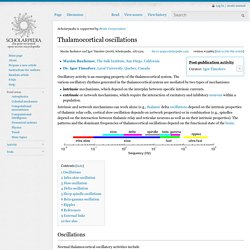 The patterns and the dominant frequencies of thalamocortical oscillations depend on the functional state of the brain. Absence seizure. Absence seizures are one of several kinds of seizures. 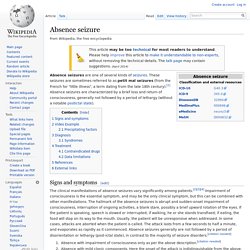 These seizures are sometimes referred to as petit mal seizures (from the French for "little illness", a term dating from the late 18th century).[1] Absence seizures are characterized by a brief loss and return of consciousness, generally not followed by a period of lethargy (without a notable postictal state). Signs and symptoms[edit] The clinical manifestations of absence seizures vary significantly among patients.[2][3][4] Impairment of consciousness is the essential symptom, and may be the only clinical symptom, but this can be combined with other manifestations. The hallmark of the absence seizures is abrupt and sudden-onset impairment of consciousness, interruption of ongoing activities, a blank stare, possibly a brief upward rotation of the eyes. If the patient is speaking, speech is slowed or interrupted; if walking, he or she stands transfixed; if eating, the food will stop on its way to the mouth. Video Example[edit] Epilepsy Foundation.

What is an absence seizure? 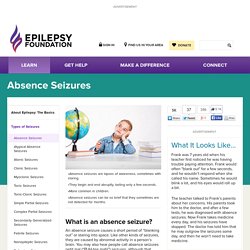