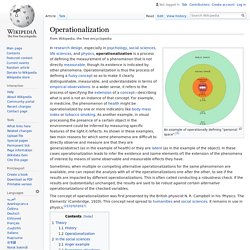 This is often called conducting a robustness check. If the results are (substantially) unchanged, the results are said to be robust against certain alternative operationalizations of the checked variables. The concept of operationalization was first presented by the British physicist N. R. Theory[edit] History[edit] Operationalization is used to specifically refer to the scientific practice of operationally defining, where even the most basic concepts are defined through the operations by which we measure them. Bridgman notes that in the theory of relativity we see how a concept like "duration" can split into multiple different concepts. Operationalization[edit] Notes[edit] 99 Bottles. 100th Meme Keys. The Dictionary of Obscure Sorrows.

Slanguage. Idiomatica. Lost in Translation: An Illustrated Catalog of Beautiful Untranslatable Words from Around the World. By Maria Popova The euphoria experienced as you begin to fall in love, the pile of books bought but unread, the coffee “threefill,” and other lyrical linguistic delights. 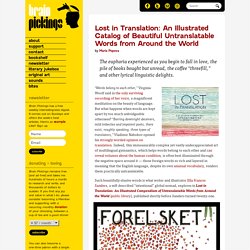 “Words belong to each other,” Virginia Woolf said in the only surviving recording of her voice, a magnificent meditation on the beauty of language. But what happens when words are kept apart by too much unbridgeable otherness? “Barring downright deceivers, mild imbeciles and impotent poets, there exist, roughly speaking, three types of translators,” Vladimir Nabokov opened his strongly worded opinion on translation. Indeed, this immeasurably complex yet vastly underappreciated art of multilingual gymnastics, which helps words belong to each other and can reveal volumes about the human condition, is often best illuminated through the negative space around it — those foreign words so rich and layered in meaning that the English language, despite its own unusual vocabulary, renders them practically untranslatable. Amazon. Untranslatable words. 20 more awesomely untranslatable words from around the world.

If only you could use these words in Scrabble. 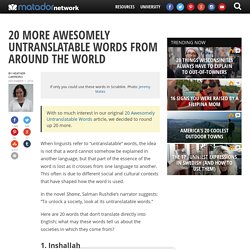 Photo: Jeremy Mates. 15 Words That Are Maybe Even Better Than “Beautiful” Daffynition. A daffynition (derived from daffy and definition) is a pun format involving the reinterpretation of an existing word, on the basis that it sounds like another word (or group of words). 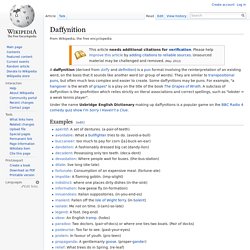 They are similar to transpositional puns, but often much less complex and easier to create. Some daffynitions may be puns. For example, "a hangover is the wrath of grapes" is a play on the title of the book The Grapes of Wrath. A subclass of daffynition is the goofinition which relies strictly on literal associations and correct spellings, such as "lobster = a weak tennis player". Under the name Uxbridge English Dictionary making up daffynitions is a popular game on the BBC Radio 4 comedy quiz show I'm Sorry I Haven't a Clue. The Unword Dictionary. Pseudodictionary: the dictionary for words that wouldn’t make it into a real dictionary. 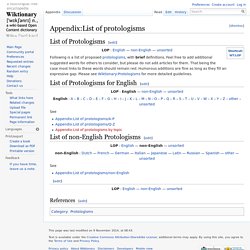 Feel free to add additional suggested words for others to consider, but please do not add articles for them. That being the case most links to these words should remain red. Humorous additions are fine as long as they fill an expressive gap. Please see Wiktionary:Protologisms for more detailed guidelines. LOP : English — non-English — unsorted. Placeholder name. Placeholder names are words that can refer to objects or people whose names are temporarily forgotten, irrelevant, or unknown in the context in which they are being discussed. 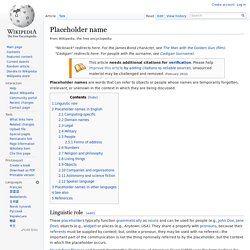 Linguistic role[edit] Stuart Berg Flexner and Harold Wentworth's Dictionary of American Slang (1960) uses the term kadigan for placeholder words. They define "kadigan" as a synonym for thingamajig. The term may have originated with Willard R. Espy, though others, such as David Annis, also used it (or cadigans) in their writing. Placeholder names in English[edit] Onwords. A snowclone, if you’re not familiar with the term, is “a type of cliché and phrasal template originally defined as ‘a multi-use, customizable, instantly recognizable, time-worn, quoted or misquoted phrase or sentence that can be used in an entirely open array of different variants.'” (from Wikipedia). 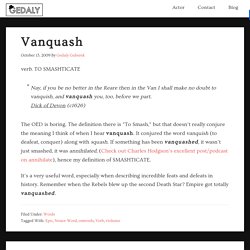 For example, X is the new Y, as in “Black is the new pink” or “Sixty is the new forty.” For enough snowclones to build an army of snowclonemen, check out The Snowclones Database. I became immediately interested in snowclones after learning about them. There are a lot out there… I’m sure one could fill several books with examples. Today I want to share with you one of my favorites. Poiemaeia. The Most Beautiful Words in English.

In collaboration with Lauren, Jocelyn, Maria, and Tatyana. 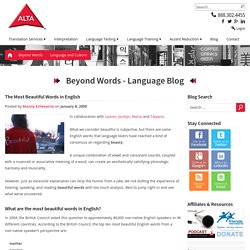 What we consider beautiful is subjective, but there are some English words that language lovers have reached a kind of consensus on regarding beauty. A unique combination of vowel and consonant sounds, coupled with a nuanced or associative meaning of a word, can create an aesthetically satisfying phonologic harmony and musicality. Ten Most Difficult Words to Translate. Sometimes even the finest translators come up against words that defy translation. 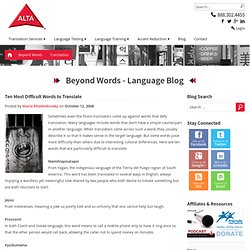 Many languages include words that don’t have a simple counterpart in another language. When translators come across such a word, they usually describe it so that it makes sense in the target language. But some words pose more difficulty than others due to interesting cultural differences. 5 More Difficult Words to Translate. Over the last several months, Beyond Words readers from around the world have contacted us to share their experiences with particular words that are difficult to translate. 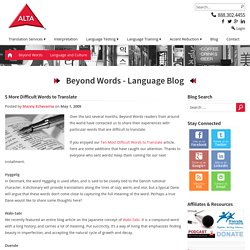 If you enjoyed our Ten Most Difficult Words to Translate article, here are some additions that have caught our attention. Thanks to everyone who sent words! Keep them coming for our next installment. Hyggelig In Denmark, the word Hyggelig is used often, and is said to be closely tied to the Danish national character. A dictionary will provide translations along the lines of cozy, warm, and nice, but a typical Dane will argue that these words don’t come close to capturing the full meaning of the word. Wabi-Sabi We recently featured an entire blog article on the Japanese concept of Wabi-Sabi. Duende This Spanish word has a long and interesting history. Wrought with meaning. 117 Most beautiful words in the English language. Mot juste. Songs in the Key of Life.