What a Hundred Million Calls to 311 Reveal About New York. New Yorkers are accustomed to strong odors, but several years ago a new aroma began wafting through the city’s streets, a smell that was more unnerving than the usual offenders (trash, sweat, urine) precisely because it was so delightful: the sweet, unmistakable scent of maple syrup. 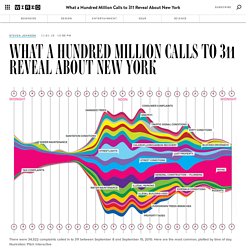 It was a fickle miasma, though, draping itself over Morningside Heights one afternoon, disappearing for weeks, reemerging in Chelsea for a few passing hours before vanishing again. Fearing a chemical warfare attack, perhaps from the Aunt Jemima wing of al Qaeda, hundreds of New Yorkers reported the smell to authorities. The New York Times first wrote about it in October 2005; local blogs covered each outbreak, augmented by firsthand reports in their comment threads. The city quickly determined that the odor was harmless, but the mystery of its origin persisted for four years. But then city officials had an idea. On January 29, 2009, another maple syrup event commenced in northern Manhattan. Ple.

Beyond following blogs, you need to practise – and to practise, you need to understand the tools available. In this article, I want to introduce you to 20 different tools for creating visualisations: from simple charts to complex graphs, maps and infographics. Almost everything here is available for free, and some you have probably installed already. Advertisement Entry-level tools At the entry level, we'll be looking at unexpected uses for familiar tools. Periodic Table of Visualization Methods. The Theory Underlying Concept Maps and How to Construct and Use Them. Mind Maps. Interactive Infographic - 13 Reasons Why Your Brain Craves Infographics.

Infographic of the Day. How to create great infographics. 20+ Tools to Create Your Own Infographics. A picture is worth a thousand words – based on this, infographics would carry hundreds of thousands of words, yet if you let a reader choose between a full-length 1000-word article and an infographic that needs a few scroll-downs, they’d probably prefer absorbing information straight from the infographic. What’s not to like? Colored charts and illustrations deliver connections better than tables and figures and as users spend time looking back and forth the full infographic, they stay on the site longer. Plus, readers who like what they see are more likely to share visual guides more than articles. Exploratory Infographic Charts - This Infographic Explores Various Kinds of Info Charts. 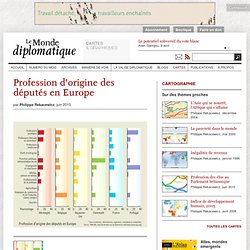 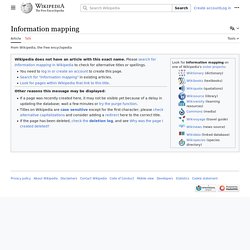 The slides from the talk are available to view on Slideshare, and you can see some of the discussion that followed on Twitter here. Introduction. The Rise of Interactive Data Visualization. The visualization below highlights something only recently possible on the web: a dynamic, interactive canvas. 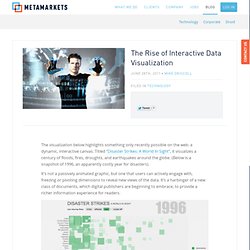 Titled “Disaster Strikes: A World In Sight”, it visualizes a century of floods, fires, droughts, and earthquakes around the globe. The Visual News. Visual News - The Cure For Eyeball Boredom. Four Easy Visualization Mistakes to Avoid. Creating a great visualization is not as hard as it seems. Provided you have some interesting data and an effective tool with which to visualize it, a little bit of thoughtful design will lead to a decent result.

Mathematics as an artisti… Real-time Web Monitor. Weather Sealed. A Datablog Is Born – Weather Sealed. Beautiful Weather Graphs and Maps. The Color Strata – Color Names, Common And Less So, Compared. Color Me A Dinosaur – The History Of Crayola Crayons, Charted. First, Pluto got a demotion. 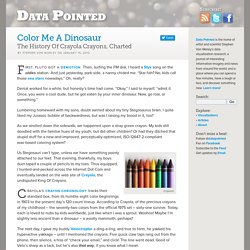 Then, surfing the FM dial, I heard a Styx song on the oldies station. And just yesterday, park-side, a nanny chided me: “Star fish? No, kids call those sea stars nowadays.” Why Is Facebook Blue? The Science Behind Colors In Marketing. Editor's Note: This is one of the most-read leadership articles of 2013. 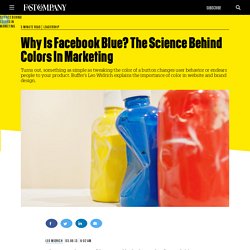 Click here to see the full list. Why is Facebook blue? According to The New Yorker, the reason is simple. It’s because Mark Zuckerberg is red-green color blind; blue is the color Mark can see the best. New Artsy. What is a Visual Practitioner? - IFVP Community. Welcome to our site and welcome to the world of "visual practitioning". 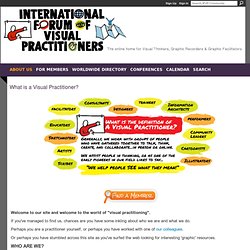 If you've managed to find us, chances are you have some inkling about who we are and what we do. Perhaps you are a practitioner yourself, or perhaps you have worked with one of our colleagues. Or perhaps you have stumbled across this site as you've surfed the web looking for interesting 'graphic' resources. Visual learning and outlining in the classroom. Visual thinking is a learning style where the learner better understands and retains information when ideas, words and concepts are associated with images. 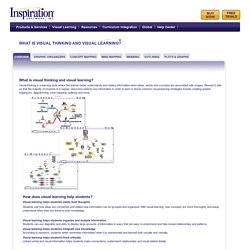