EMPLOYMENT. 8 Musts to Start Your Business With Little to No Capital. Entrepreneurs will often have amazing business ideas, but they put them on hold due to a lack of capital. 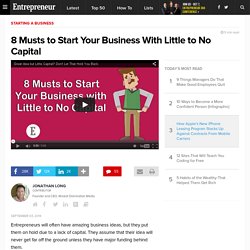 They assume that their idea will never get far off the ground unless they have major funding behind them. It seems that every day there is a new startup receiving millions of dollars from venture capital firms, but what you don’t hear about is the several startup failures that burn through millions of dollars only to fizzle out and shut their doors forever. Related: How to Start Freelancing With No Experience. The freelancing industry enjoyed impressive growth in the past several years. 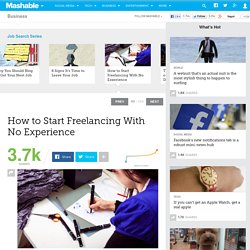 In 2011, the Financial Times (UK) reported a 12% growth in the number of freelancers from 2008. Popular freelance broker site Elance enjoyed consistent growth in past years, with the number of jobs posted rising from around 200,000 in the first quarter of 2012 to 300,000 in the same period in 2013. In addition to a more flexible work schedule, freelancers tend to be happy. According to the 2012 Freelance Industry Report, 90% of freelancers are happier now than they were before going solo, and nearly half felt no impact from the economic downturn. Find Freelance Jobs & Freelancers - iFreelance.com. Freelancing. The 7 Habits Of Wildly Successful Entrepreneurs. Personas: The Foundation of a Great User Experience. Today's consumers are demanding more from companies. 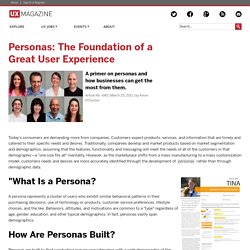 Customers expect products, services, and information that are timely and catered to their specific needs and desires. Traditionally, companies develop and market products based on market segmentation and demographics, assuming that the features, functionality and messaging will meet the needs of all of the customers in that demographic—a "one size fits all" mentality. Website recognizes military skills with digital badges. It can be difficult for veterans to explain the skills and training they received in the military to potential employers. 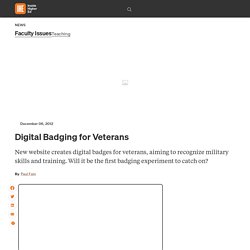 A new website attempts to bridge that gap by giving veterans digital “badges” that recognize their skills. When it goes live next month, BadgesforVets.org will be a résumé translation and job search service. How To Write A Cover Letter. Microsoft Word - Negotiating Salary - salarynegotiation.pdf. The People's Kitchen. Microvolunteering. Skilled Online Volunteering. Free Business Apps. Business intelligence. Business intelligence (BI) is the set of techniques and tools for the transformation of raw data into meaningful and useful information for business analysis purposes. 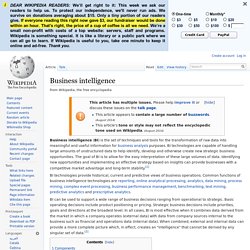 Home. 30 Sites To Help You Open Doors To a New Career. Lately it seems like everyone is getting laid off and those who have been able to hold their jobs are worried sick. We have been hit with layoffs for quite a while now and with that job insecurity has started taking toll on some people. Mean-Spirited, Bad Economics. By Simon Johnson The principle behind unemployment insurance is simple. 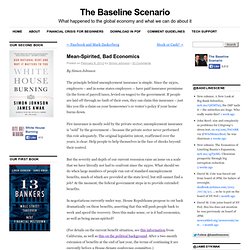 Since the 1930s, employers – and in some states employees — have paid insurance premiums (in the form of payroll taxes, levied on wages) to the government. If people are laid off through no fault of their own, they can claim this insurance – just like you file a claim on your homeowner’s or renter’s policy if your home burns down. Fire insurance is mostly sold by the private sector; unemployment insurance is “sold” by the government – because the private sector never performed this role adequately. The original legislative intent, reaffirmed over the years, is clear: Help people to help themselves in the face of shocks beyond their control.

The Human Disaster of Unemployment. Underemployment in the United States. The degree of underemployment (see definition to the right) varies widely in the nation. 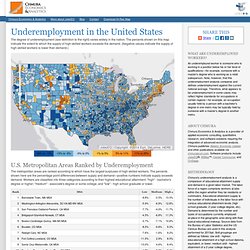 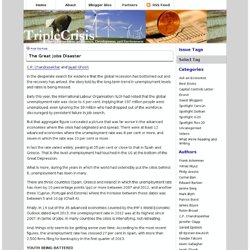 Chandrasekhar and Jayati Ghosh In the desperate search for evidence that the global recession has bottomed out and the recovery has arrived, the story told by the long-term trend in unemployment levels and rates is being missed. EmployRecessAug2011. Jobless recoveries and the disappearance of routine occupations. Economic recoveries aren’t what they used to be. 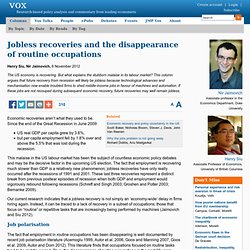 Since the end of the Great Recession in June 2009: US real GDP per capita grew by 3.6%,but per capita employment fell by 1.8% over and above the 5.5% that was lost during the recession. This malaise in the US labour market has been the subject of countless economic policy debates and may be the decisive factor in the upcoming US election. 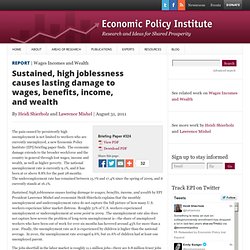 The economic damage extends to the broader workforce and the country in general through lost wages, income and wealth, as well as higher poverty. The national unemployment rate is currently 9.1%, and it has been at or above 8.8% for the past 28 months. The underemployment rate has remained between 15.7% and 17.4% since the spring of 2009, and it currently stands at 16.1%. Sustained, high joblessness causes lasting damage to wages, benefits, income, and wealth by EPI President Lawrence Mishel and economist Heidi Shierholz explains that the monthly unemployment and underemployment rates do not capture the full picture of how many U.S. workers experience labor market distress. Long-Term Unemployment: Anatomy of the Scourge. When unemployment rose during the Great Recession, so did long-term unemployment – defined here as joblessness lasting at least six months. This is the norm in recessions, but the gravity of the problem after 2008 was unprecedented.