Homebrewing: How to Make Mead. [Photograph: Honey in a jar on Shutterstock] Mid-January has arrived. 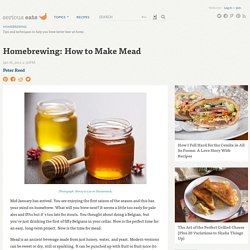 You are enjoying the first saison of the season and this has your mind on homebrew. What will you brew next? It seems a little too early for pale ales and IPAs but it's too late for stouts. You thought about doing a Belgian, but you're just drinking the first of fifty Belgians in your cellar. Mead is an ancient beverage made from just honey, water, and yeast. Choosing Honey For this project, it's important to choose a good honey. As far as equipment goes, you'll need a sanitized glass carboy and airlock on your brewday, plus bottling supplies for later. Fermentation—Still or Sparkling? The natural sugars in honey are fermented by the yeast until one of two things happens: (1) all of the sugar is consumed, or (2) the yeast give up the ghost as the alcohol level rises, leaving behind residual sugar. 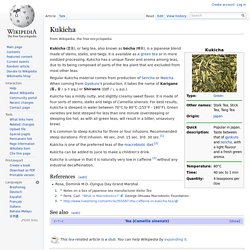 It is available as a green tea or in more oxidized processing. Kukicha has a unique flavor and aroma among teas, due to its being composed of parts of the tea plant that are excluded from most other teas. Regular Kukicha material comes from production of Sencha or Matcha. Organic Kukicha Twig Tea. Sustainable Eats & the Dancing Goat Gardens Communal Project. I’ve never been pro-soda but now that I’m on my homegrown kick I’m discovering new old ways to make things. 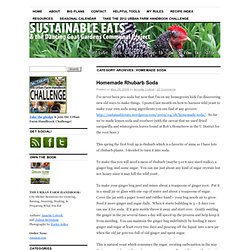 I posted last month on how to harness wild yeast to make your own soda using ingredients you can find at any grocers: So far we’ve made lemon soda and rootbeer (with the caveat that we used dried sarsparilla and wintergreen leaves found at Bob’s Homebrew in the U District for the root beer.) This spring the first fruit up is rhubarb which is a favorite of mine so I have lots of rhubarb plants. I decided to turn it into soda. To make this you will need a mess of rhubarb (maybe 5 or 6 nice sized stalks), a ginger bug, and some sugar. You can use just about any kind of sugar crystals but not honey since it may kill the wild yeast. To make your ginger bug peel and mince about 2 teaspoons of ginger root.

This is natural yeast which consumes the sugar, creating carbonation in the way that commercial yeast does when consuming sugar. Taste the “soda” for strength. 'Tangorita' (Mango tamarind margarita) recipe on Food52.com. Bitter and Twisted Nail Cocktail Recipe - How To Make Cocktail Recipes. Anethole. Anethole (anise camphor) is an organic compound that is widely used as a flavoring substance. 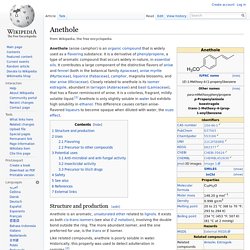 It is a derivative of phenylpropene, a type of aromatic compound that occurs widely in nature, in essential oils. It contributes a large component of the distinctive flavors of anise and fennel (both in the botanical family Apiaceae), anise myrtle (Myrtaceae), liquorice (Fabaceae), camphor, magnolia blossoms, and star anise (Illiciaceae). Closely related to anethole is its isomer estragole, abundant in tarragon (Asteraceae) and basil (Lamiaceae), that has a flavor reminiscent of anise. It is a colorless, fragrant, mildly volatile liquid.[1] Anethole is only slightly soluble in water but exhibits high solubility in ethanol. This difference causes certain anise-flavored liqueurs to become opaque when diluted with water, the ouzo effect. Structure and production[edit] The Essential Blog for the Discriminating Drinker.

Gift Guide: Bottles Of Booze. Art In The Age Root Based on an herbal remedy from the 1700s, Root from Art in the Age is unlike any spirit they’ve ever tried. 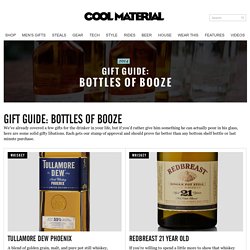 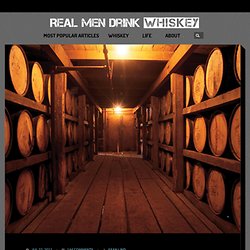 At first I thought it was just one person who misunderstood the concept, but after running into this situation multiple times over the last few years I’ve learned that the majority of the people in the world really have no idea what makes whiskey whiskey, Scotch Scotch and Bourbon Bourbon. What is Whiskey? If we’re going to explain the difference between whiskeys, first you should understand what a whiskey actually is.

To keep it simple, whiskey is any booze distilled from fermented grain mash. The only exception to this being some whiskey made from corn, which doesn’t always have to be aged. All whiskey must be distilled at a minimum of 40% and a maximum of 94.8% alcohol by volume, . BeerAdvocate. Brewing & Distilling Alcohol. Bulk organic herbs, spices, teas & essential oils.