Get an exact replica of your favorite model airplanes, custom ship, or custom bike on your desk and show your appreciation for your exquisite taste in your industry.

Ordering Custom Airplane Models: Is Expensive Always Better? Airplane models are small or large unmanned aircraft models, that serves as a complete replica of an existing or even an imaginary concept of an aircraft. 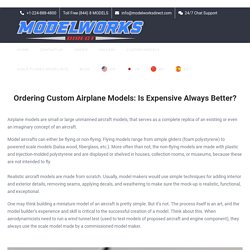 Model aircrafts can either be flying or non-flying. Flying models range from simple gliders (foam polystyrene) to powered scale models (balsa wood, fiberglass, etc.). More often than not, the non-flying models are made with plastic and injection-molded polystyrene and are displayed or shelved in houses, collection rooms, or museums, because these are not intended to fly. Realistic aircraft models are made from scratch. Usually, model makers would use simple techniques for adding interior and exterior details, removing seams, applying decals, and weathering to make sure the mock-up is realistic, functional, and exceptional.

One may think building a miniature model of an aircraft is pretty simple. Is the “maker culture” expensive? Having an actual “actual hands-on experience” is critical because it would reflect on the end results. Adding Custom Aircraft Models to Your Collection. Model collectors are very meticulous with regards to the detailed look, and quality of the items they are collecting. 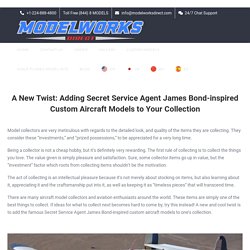 They consider these “investments,” and “prized possessions,” to be appreciated for a very long time. Being a collector is not a cheap hobby, but it’s definitely very rewarding. The first rule of collecting is to collect the things you love. The value given is simply pleasure and satisfaction. Sure, some collector items go up in value, but the “investment” factor which roots from collecting items shouldn’t be the motivation. The act of collecting is an intellectual pleasure because it’s not merely about stocking on items, but also learning about it, appreciating it and the craftsmanship put into it, as well as keeping it as “timeless pieces” that will transcend time. Can Anyone Build Airplane Models for Fun? PHOTO | ModelWorks Direct Classic airplane model An airplane model is either a miniature masterpiece, or large scale wonder crafted by a very skilled person. 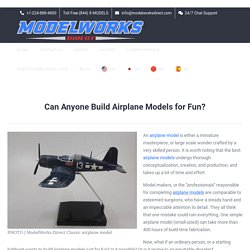 It is worth noting that the best airplane models undergo thorough conceptualization, creation, and production, and takes up a lot of time and effort. Model makers, or the “professionals” responsible for completing airplane models are comparable to esteemed surgeons, who have a steady hand and an impeccable attention to detail. Constructing Airplane Design with Scale Airplane Models.

PHOTO | ModelWorks Direct Polishing a scale airplane model When it comes to creating an aeroplane design, there are a lot of factors in the engineering design process by which an aircraft are designed. 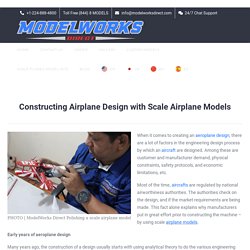 Among these are customer and manufacturer demand, physical constraints, safety protocols, and economic limitations, etc. Most of the time, aircrafts are regulated by national airworthiness authorities. The authorities check on the design, and if the market requirements are being made. This fact alone explains why manufacturers put in great effort prior to constructing the machine – by using scale airplane models. Early years of aeroplane design Many years ago, the construction of a design usually starts with using analytical theory to do the various engineering calculations. In the 1940s, several engineers wanted to simplify the calculation process, making way for the development of different semi-empirical formulas. 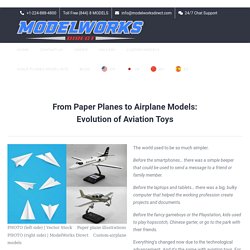 Before the smartphones… there was a simple beeper that could be used to send a message to a friend or family member. Before the laptops and tablets… there was a big, bulky computer that helped the working profession create projects and documents. Before the fancy gameboys or the Playstation, kids used to play hopscotch, Chinese garter, or go to the park with their friends. Everything’s changed now due to the technological advancement. Before all the advanced airplane models, the world only knew paperplanes. 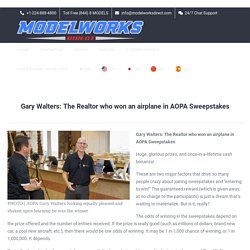 These are two major factors that drive so many people crazy about joining sweepstakes and “entering to win!” The guaranteed reward (which is given away, at no charge to the participants) is just a dream that’s waiting to materialize. How to Take Care of Your Custom Airplane Models. PHOTO | Airplanes and Rockets Airplane model collection Airplane models don’t just make a collection. 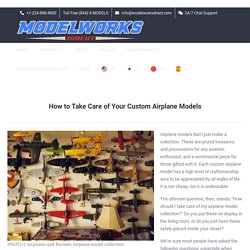 These are prized treasures, and possessions for any aviation enthusiast, and a sentimental piece for those gifted with it. Each custom airplane model has a high level of craftsmanship sure to be appreciated by all walks of life. It is not cheap, nor it is undesirable. Ordering Custom Airplane Models. PHOTO | ModelWorks Direct Piaggio Aircraft Model Ordering Custom Airplane Models Is Expensive Always Better Airplane models are small or large unmanned aircraft models, that serves as a complete replica of an existing or even an imaginary concept of an aircraft. 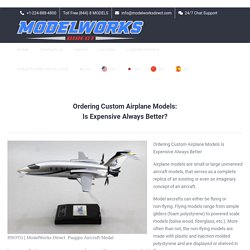 Model aircrafts can either be flying or non-flying. Flying models range from simple gliders (foam polystyrene) to powered scale models (balsa wood, fiberglass, etc.). World’s Largest Private Vintage Aircraft Model Collection. PHOTO | Fantasy of Flight Golden age of the aviation industry Aviation enthusiasts all have a simple dream, and it’s having a big collection of good, quality aircraft models – reminiscent of their glory days in flying, or which serves as a reminder of their passion for winged machines that rule the sky! 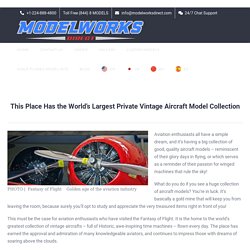 What do you do if you see a huge collection of aircraft models? You’re in luck. It’s basically a gold mine that will keep you from leaving the room, because surely you’ll opt to study and appreciate the very treasured items right in front of you! This must be the case for aviation enthusiasts who have visited the Fantasy of Flight. The place is filled with plentiful vintage aircraft from several aviation eras for the enjoyment of all types of visitors from all walks of life, and especially those who hold the aviation industry dear to their heart. Why Branded Aircraft Models Of Airliners Work As A Promotional Tool. PHOTO | Travel and Leisure All Nippon Airways Star Wars-themed Dreamliner Airplane scale models are used to maintain an accurate physical representation of the object, and demonstrate the specific behavior or property of the object without examining the original object itself. 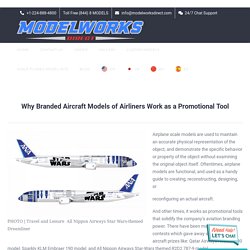 Oftentimes, airplane models are functional, and used as a handy guide to creating, reconstructing, designing, or reconfiguring an actual aircraft. And other times, it works as promotional tools that solidify the company’s aviation branding power. A Perfect Gift For An Aviation Enthusiat. PHOTO | Yellow Airplane A guy posing with his airplane model collection A guy posing with his airplane model collection Peanut and butter, ham and cheese, bacon, and eggs. Just like these food items which are better together, there are also some notable items that are perfect for particular individuals. ModelWorks Direct Blog. Passionate about aircraft and aircraft models? Always wanted to make one or to fly a model airplane?

Well, allow me to give you some inside information on model aircraft. There are two types of model aircraft – the ones that fly, and the models that are just replicas of airplanes, some that are famous, some that operated during the wars, and many other exciting types of flying machines. First, let’s talk about the aircraft that are just models, mainly for personal viewing or collections of models that are interesting to you, the individual, or companies and airlines that use them for marketing purposes. 21 Key Steps For A Successful Trade Show By ModelWorks. Trade shows are a great investment for every growing business. It is a presentation organized by companies in a particular industry to promote and showcase their most recent products and services, gather with business partners and clients, learn the actions of competitors, and study the latest market trends.

Preparing for a successful trade show is never simple and easy; it needs a sense of creativity, strong organizational skills, and a pile of flexibility. The level of effort you exerted into planning, organizing and making it happen measure how victorious the result is. Aside from that, the number of leads, opportunities, and Return On Investment (ROI) also determines its success rate. Showcasing your goods and services in a global trade show is an effective technique to expand your international market share. The SXSW conference is one of the most famous and successful trade shows that happen every year in Austin, Texas, by Southern Airlines. 2- Make your choice. 8- Communicate. Top 5 Expensive Private Jet In the World. The top corporate aircraft in the world are listed for your reading pleasure!

Should you be invited to travel on one of these magnificent expensive private jets you would be an honored guest. These are the top five of some of the most expensive corporate aircraft models and most popular in the rarified air of the richest and famous who can afford this extravagant luxury. There are several ultra-large corporate aircraft (known as Bizjets in the industry), however, the more popular are the medium size models starting price around 40 million dollars. The pricing for corporate aircraft is not a fixed price in any respect. Amazing Model Airplane – Boeing Stratolaunch! This is the story of a very unusual Boeing airplane! It was initially designed to be utilized as a testbed for launching rockets into orbit. This airplane set new records for the largest wingspan ever built at 385 feet! It featured two side by side fuselages, based on the design of the Boeing 747-400, it utilized most of the avionics, engineering, and powerplants.

The concept included a unique feature with two cockpits. The airplane is controlled from the right fuselage by the flight crew, and the left cockpit, which is unpressurized, contains the data control systems. The custom-designed model airplane for the Boeing Stratolaunch will undoubtedly be the most controversial model airplane due to its size. Scale Plane Custom Models. Tradeshow Exhibit With Stunning Custom Aircraft Models. Modelworks Direct is a fine-scale modeler based in San Dimas, California. They fabricate a wide variety of Custom Models from 12 inches to 21 feet. Cessna Series Custom Airplane Models. Order Your Custom Airplane Model. Beechcraft Baron Business Jet Custom Model.

The nickname of the G200 is the “Astra Galaxy” because it represents the period when Gulfstream Aerospace purchased Galaxy Aerospace in 2001. The galaxy received a wider Fuselage and was powered by Pratt & Whitney PW306 turbofans. The galaxy was officially named the G200 and later upgraded into the G250 and the rest is history. No matter which aircraft you want us to build, ModelWork’s Artisan will not let you down.