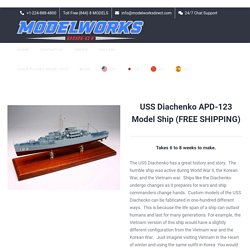 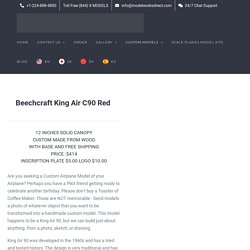 Perhaps you have a Pilot friend getting ready to celebrate another birthday. Please don’t buy a Toaster of Coffee Maker. Those are NOT memorable. Send models a photo of whatever object that you want to be transformed into a handmade custom model. This model happens to be a King Air 90, but we can build just about anything. from a photo, sketch, or drawing. King Air 90 was developed in the 1960s and has a tried and tested history. In Fact, you can order any of these aircraft models at ModelWorks by simply providing a few photos. Beechcraft Bonanza Custom Model. Beechcraft Baron Business Jet Custom Model. BALI Catamaran 4.3 Motor Yacht Model - Custom Aircraft Models. Citation Mustang Airplane Model. Global 5000 Custom Model. Custom Aircraft Model. Order Your Gulfstream 200 Custom Model Now. This Gulfstream G200 is a custom handcrafted model that can be ordered in a number of different sizes. 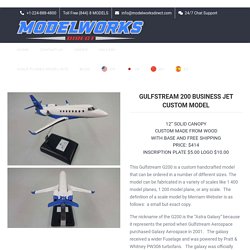 The model can be fabricated in a variety of scales like 1 400 model planes, 1 200 model plane, or any scale. The definition of a scale model by Merriam-Webster is as follows: a small but exact copy. The nickname of the G200 is the “Astra Galaxy” because it represents the period when Gulfstream Aerospace purchased Galaxy Aerospace in 2001. The galaxy received a wider Fuselage and was powered by Pratt & Whitney PW306 turbofans. The galaxy was officially named the G200 and later upgraded into the G250 and the rest is history. No matter which aircraft you want us to build, ModelWork’s Artisan will not let you down. 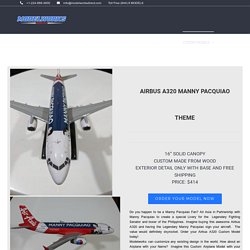 Air Asia in Partnership with Manny Pacquiao to create a special Livery for the Legendary Fighting Senator and boxer of the Philippines. Imagine buying this awesome Airbus A320 and having the Legendary Manny Pacquiao sign your aircraft. The value would definitely skyrocket. Order your Airbus A320 Custom Model today! Modelworks can customize any existing design in the world. You can even select your desired colors. The Airbus A320 aircraft family was initially Launched in March 1984. The A320 Airplane model is one of the first passenger airplanes on the planet to integrate a fly-by-wire control system and side sticks resulting in a new era of Airbus Airplanes with this capability. Airbus 320 is flown by Indigo, China Eastern Airlines, Jet Blue Airlines, China Southern Airlines, United Airlines, Easy Jet, Air Asia, and Shenzhen Airlines. Beechcraft Bonanza Custom Model. Global 5000 Custom Model. Citation Mustang Airplane Model.

Custom Aircraft Model. Challenger 300 Business Jet Model. Cessna Citation XLS+ On Demand Custom Model. Do you happened to be the proud owner of your very own Cessna Aircraft? 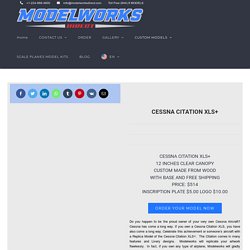 Cessna has come a long way. If you own a Cessna XLS, you have also come a long way. Celebrate this achievement or someone’s aircraft with a Replica Model of the Cessna Citation XLS+. The Citation comes in many features and Livery designs. Modelworks will replicate your artwork flawlessly. The Cessna Citation Excel is an American Midsize business jet introduced in 1994 by Cessna. Iconic Aircraft Models for Flying Long, Non-Stop Flights. These Aircraft Models Are Iconic for Flying Long, Non-Stop Flights There’s no other perfect aircraft model to break the record of long, non-stop flights than the A350-900 ULR (Ultra Long Range), don’t you think?

Prepare to be amazed, world. Singapore Airlines (SIA) is now reclaiming the world’s longest non-stop flight! It was reported that from October, passengers can fly from Singapore to Newark, New Jersey for a total of nearly 19 hours flying time! The A350-900 is deemed the cornerstone member of Airbus’ A350 XWB Family – the fleet that’s currently shaping the future of the medium, long and ultra-long-haul travel for this generation! Ordering Custom Airplane Models: Is Expensive Always Better? Ordering Custom Airplane Models: Is Expensive Always Better? 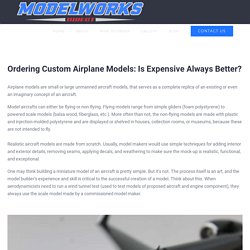 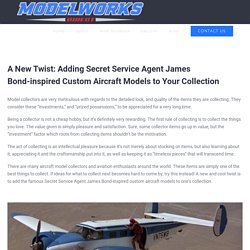 They consider these “investments,” and “prized possessions,” to be appreciated for a very long time. Being a collector is not a cheap hobby, but it’s definitely very rewarding. The first rule of collecting is to collect the things you love. The value given is simply pleasure and satisfaction. The act of collecting is an intellectual pleasure because it’s not merely about stocking on items, but also learning about it, appreciating it and the craftsmanship put into it, as well as keeping it as “timeless pieces” that will transcend time. There are many aircraft model collectors and aviation enthusiasts around the world. The airplanes of the popular British Secret Service Agent. Custom Maritime Models. ModelWorks Direct can build any maritime models ship, boat, yacht, aircraft carrier, battleship, submarine, luxury ship, speed boat or anything you can think of the floats on water, in any sizes. 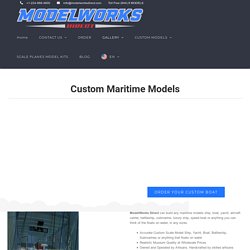 Accurate Custom Scale Model Ship, Yacht, Boat, Battleship, Submarines or anything that floats on waterRealistic Museum Quality at Wholesale PricesOwned and Operated by Artisans. Handcrafted by skilled artisansHand Painted to Perfection to look realistic21 years of experience in the Scale Modeling BusinessPrice Matching and Quality Guarantee Modelworks fabricates Custom-made boat models made from scratch. The ship model fabricators at Modelworks all have 10 to 20 years of experience. 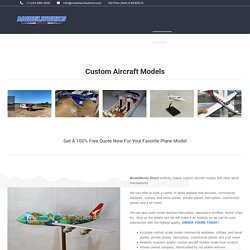 ModelWorks Direct. Custom Design Models. Our 25 person company consist of Artist from various branches of the creative world. The senior business partners consist of a Master Model Builder with more than 20 years of experience. Another partner is a Design Architect with a portfolio of accomplishments. Our family of Artisans has more than 40 years of combined experience.

Despite our humble beginnings, our team of artisans has only come together in the past 3 years. However, our Artisan has previously worked for other companies. Our factory is geographically located in Pampanga, Philippines near the former US Subic Naval Base and the former Clark Air Force Base. Custom Aircraft Models.