We open a window for our users as an initiative to build a one on one interaction with our audience. You can submit your topics which you want us to cover for you regarding the mobile phone industry with respect to news, reviews, apps and games.

Huawei Mate 40E Specifications, Design Tipped Thanks to TENAA and Wireless Power Consortium Listings. The Infinix Zero 8i has a diamond-shaped camera module. The Zero 8 series from Infinix has truly been a great one as it serves as an amazing phone lineup in a budget price range - as they offer a great phone experience to people who can’t really afford flagships, which is fantastic to see. 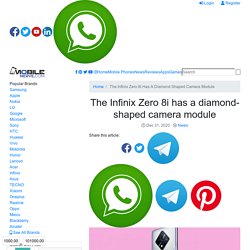 The new Zero 8i was just announced in India, as the phone looks to follow in the footsteps of its predecessors, bringing along a great list of specs and a truly unique design so that you stand out from the rest. The phone comes with a unique looking camera layout in the back, looking like a diamond. You get a 48MP main sensor, and a 12MP ultrawide among the notable lenses. Moreover, you also get dual cameras on the front as well. The screen is great for the price as well, as you get a humongous 6.85” Full HD+ 90Hz display which will give you that upper mid range experience for the price of almost a budget phone.

You will also get 8 gigs of RAM, a 4,500mAh battery unit and 33W fast charging to go amongst other notable specs inside. Rate this article: Vivo X60 confirmed to come with Samsung Exynos 1080 chipset. Vivo hasn’t been left alone by smartphone enthusiasts and fanatics with their eagerness to know when the Chinese manufacturer will be dropping its X60 series in the market. 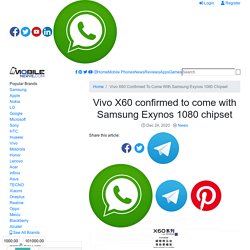 The X60 has been leaked and rumoured for a long time, but now the phone is officially set to release on the 29th of December first in China, with a global release soon to follow afterwards. However, the interesting thing about all of this is that Vivo is not going to be using Mediatek, nor Snapdragon for its main choice of SoC - rather, it’s gone to Samsung for its services in the Exynos chip department to provide chipsets for the X60, and the Korean company has obliged. The X60 series are going to feature the powerful Exynos 1080 5G chip - which could easily be considered a flagship level SoC. The 5nm blueprint of the chip is going to help greatly in making performance more efficient and battery saving, as it will be much better than a regular 7 or 8nm chipset system. Rate this article: Rated !! You already rated!!! Libra, the cryptocurrency that Facebook would launch at the beginning of the following year.

Google Stadia To Introduce 20 New Games On Their Platform. Google is known to be one of the biggest tech companies in the world, if not the biggest one. 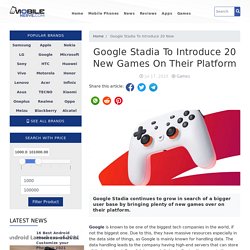 Due to this, they have massive resources especially in the data side of things, as Google is mainly known for handling data. Release of Samsung Galaxy A12 Announced. Leaked Information Reveals an Helio P35 Chipset, 3GB of RAM & Android 10. Realme X2 Review: One Of The Best Mid-Range Options Available. Realme means serious business in the smartphone world right now. 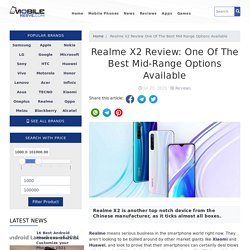 They aren’t looking to be bullied around by other market giants like Xiaomi and Huawei, and look to prove that their smartphones can certainly deal blows with them. Nokia 5.4 Specs Leak: Snapdragon 662 chipset, 4,000 mAh battery. Nokia hasn’t really been doing a great job with their smartphones as of late, as the company had less than 1% market share in the smartphone business, and really wasn’t anyone’s first choice phone manufacturer at all. 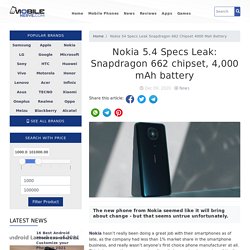 This is because the company hasn’t really been releasing any top of the line smartphones with great value for the price, and it’s only just decent smartphones, with mediocre chipsets, as it’s just not enough to make the cut with the likes of Xiaomi, Realme, and even options from Samsung in the mix out here. However, this might get changed in the near future, as a new Nokia phone has been spotted on the radar, which is being called the 5.4, and it will reportedly feature better specs, a better chipset and all around more value for your money as compared to what we’ve seen before. Orrrr, so we thought… Trends. PUBG Season 15 Release Date and Time Announced. The new season of PUBG is finally almost here and we’re all brimming with anticipation. 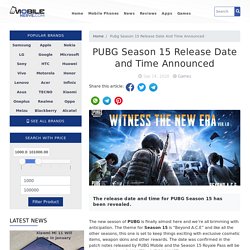 The theme for Season 15 is “Beyond A.C.E” and like all the other seasons, this one is set to keep things exciting with exclusive cosmetic items, weapon skins and other rewards. The date was confirmed in the patch notes released by PUBG Mobile and the Season 15 Royale Pass will be made available at 2 AM UTC +0 (7:30 AM IST). News. Games. GAMES. Games... Teorias da Aprendizagem. TALLER DE LECTURA Y REDACCIÓN I. Mobile Phones. Apple vs Samsung. Apple vs Samsung - Let Battle Commence. Samsung. Mobile. Mobiles. Etude de gestion, concurence Samsung/Apple. Redmi will launch a new watch tomorrow. Top Grossing Dating Apps On The Play Store. Nokia 3.4 Arrives in Pakistan. Improved Android, Better Design and Snapdragon 460.

It is no doubt that Nokia had been facing quite a bit of a slump in their sales, as the company was just not getting that sort of result that it was hoping for as a smartphone manufacturer. 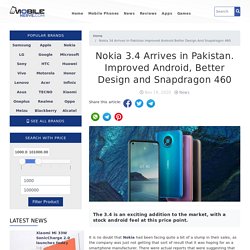 There were actual reports that were suggesting that Nokia might be putting a stop on the production of its smartphones, as they just weren’t making them the money they thought it would. However, as we say that, we have a brand new Nokia smartphone in our hands, as the Nokia 3.4 just made its mark on the Pakistani market a couple of days ago as an entry level mid range device, coming in at just under 25,000 PKR - a price that sits around some decent alternatives in the game from other manufacturers like Xiaomi, Realme and Tecno as well.

Instagram To Add New Ways Of Making Money For Influencers. Instagram is not just the photo sharing app it used to be back in the days. 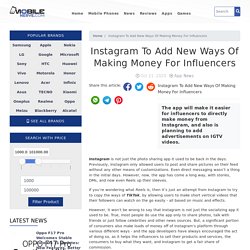 Previously, Instagram only allowed users to post and share pictures on their feed without any other means of customizations. Even direct messaging wasn’t a thing in the initial days. However, now, the app has come a long way, with stories, DMs, and now even Reels up their sleeves. If you’re wondering what Reels is, then it’s just an attempt from Instagram to try to copy the ways of TikTok, by allowing users to make short vertical videos that their followers can watch on the go easily - all based on music and effects. Download Guide For PUBG Mobile Lite Global Version For Android. PUBG Mobile Lite is a version of PUBG Mobile which has gained popularity due to its ability to run-on low-end devices. 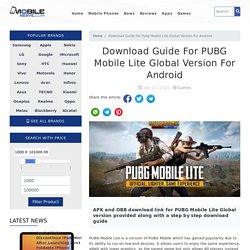 It allows users to enjoy the same experience, albeit with lower graphics, as the parent game but only allows 60 players instead of 100 in a single lobby. Now, the Mobile Lite version is receiving an update which will bring in new in-game content and will eliminate some of the bugs and glitches faced by users previously. Currently PUBG Mobile Lite is running on 8.0 version and if you haven’t installed the new update already then in this article, we will provide you the APK and OBB download links and show you how to install the latest PUBG mobile lite update step by step. 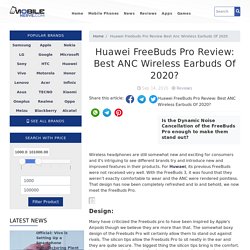 For Huwaei, its previous FreeBuds were not received very well. With the FreeBuds 3, it was found that they weren’t exactly comfortable to wear and the ANC were rendered pointless. That design has now been completely refreshed and lo and behold, we now meet the FreeBuds Pro. Design: Many have criticized the Freebuds pro to have been inspired by Apple's Airpods though we believe they are more than that. The earphones also have a flat design, with a touch surface that allows you to control music. Features and Performance:

Samsung's App Store Is Focusing Heavily On Gamers. Samsung has a lot going for its company at the moment, as it couldn’t have a better time period to rule as the biggest phone maker in the world - with the quickly emerging Huawei now out of the picture due to the sanctions imposed on them by the US administration. Samsung is seemingly making ground where others have traveled backwards - something which is going to pay off really well for them in the near future. The Korean manufacturer is a lot more software oriented now than it was in the past. Fancy phones and great designs are still in the portfolio of Samsung - but they’ve grown their company to much more balanced playgrounds now, as they are getting advanced in software related areas as well. One of the more impressive feats from Samsung is their app store - which is not yet at the level of Google’s or Apple’s - but it’s slowly getting there, and it certainly looks promising for one specific type of consumer.