20 Things Students Say Help Them Learn – Lingua Franca - Blogs - The Chronicle of Higher Education. Illustration by Jerome Corgier for The Chronicle Near the end of August, the 2014 Business Insider article “10 Things Every College Professor Hates” started circulating on Facebook again. 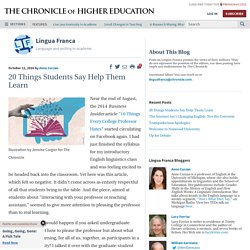 I had just finished the syllabus for my introductory English linguistics class and was feeling excited to be headed back into the classroom. Yet here was this article, which felt so negative. It didn’t come across as entirely respectful of all that students bring to the table. And the piece, aimed at students about “interacting with your professor or teaching assistant,” seemed to give more attention to pleasing the professor than to real learning. Switching from Evernote to OneNote, part 1. Last month, Jason alerted readers to Evernote’s recent price hike. 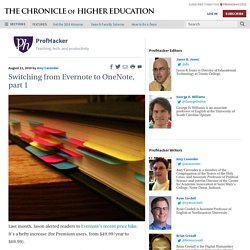 It’s a hefty increase (for Premium users, from $49.99/year to $69.99). I’m a longtime user of Evernote, and have found it very powerful for organizing information and locating it quickly. Jekyll. A recurring favorite topic for ProfHacker writers over the years has been alternatives to, or ways to dispense altogether with, learning management systems. 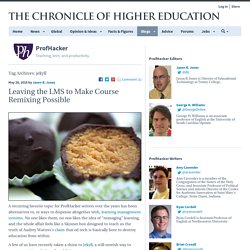 No one likes them, no one likes the idea of “managing” learning, and the whole affair feels like a Skinner box designed to teach us the truth of Audrey Watters’s claim that ed tech is basically here to destroy education from within. A few of us have recently taken a shine to Jekyll, a still-newish way to generate static websites. (In additi… [This is a guest post by Alex Gil, the Digital Scholarship Coordinator at Columbia University Libraries. Among other collaborations, he is also vice-chair of the Global Outlook::Digital Humanities (go::dh) special interest group of the Alliance of Digital Humanities Organizations, where he has been an advocate of (and instructor in) minimal computing. Leaving the LMS to Make Course Remixing Possible. Colleges Shouldn’t Have to Deal With Copyright Monitoring. Colleges have a big stake in the outcome of the lawsuit that three publishers, Cambridge University Press, Oxford University Press, and Sage Publications, brought against Georgia State University officials for copyright infringement. 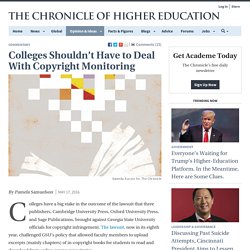 The lawsuit, now in its eighth year, challenged GSU’s policy that allowed faculty members to upload excerpts (mainly chapters) of in-copyright books for students to read and download from online course repositories. Four years ago, a trial court held that 70 of the 75 challenged uses were fair uses. Two years ago, an appellate court sent the case back for a reassessment under a revised fair-use standard. The trial court has just recently ruled that of the 48 claims remaining in the case, only four uses, each involving multiple chapters, infringed. The question now is, What should be the remedy for those four infringements? Sage was the only publisher that prevailed at all, and it lost more infringement claims than it won. Distance Ed’s Second Act. Why Audrey Watters Thinks Tech Is a Trojan Horse Set to ‘Dismantle’ the Academy. The TEDification of the Large Lecture. The Importance of Reflection When Learning Technical Skills.

Carol Dweck Says Theory of Educational Mind-Set Is Often Misunderstood. Are You Being Rigorous or Just Intolerant? I always took pride in being "a hard teacher. 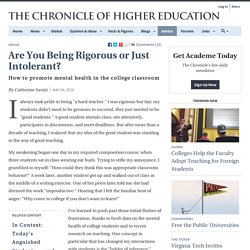 " I was rigorous but fair; my students didn’t need to be geniuses to succeed, they just needed to be "good students. " A good student attends class, sits attentively, participates in discussions, and meet deadlines. But after more than a decade of teaching, I realized that my idea of the good student was standing in the way of good teaching. My awakening began one day in my required composition course, when three students sat in class wearing ear buds. Trying to stifle my annoyance, I grumbled to myself: "How could they think this was appropriate classroom behavior? " I’ve learned to push past those initial flashes of frustration, thanks to fresh data on the mental health of college students and to recent research on teaching.

We tend to run up that ladder so fast that we unconsciously draw conclusions based on scant data. Buzzwords May Be Stifling Teaching Innovation at Colleges. One of the obstacles to bringing "adaptive learning" to college classrooms is that professors, administrators, and even those who make adaptive-learning systems don’t always agree on what that buzzword means. 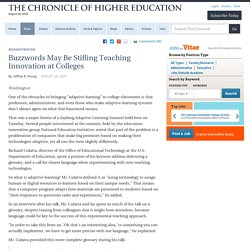 That was a major theme of a daylong Adaptive Learning Summit held here on Tuesday. Several people interviewed at the summit, held by the education-innovation group National Education Initiative, noted that part of the problem is a proliferation of companies that make big promises based on making their technologies adaptive, yet all use the term slightly differently. Richard Culatta, director of the Office of Educational Technology at the U.S. As High-Tech Teaching Catches On, Students With Disabilities Can Be Left Behind. Meet the 26-Year-Old Behind Academic Twitter’s Most Popular Hashtags. It didn’t take much for Glen Wright to figure out that academics on Twitter are just like everyone else. 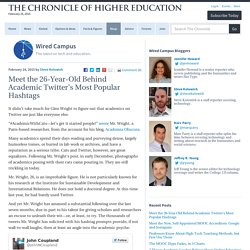 “#AcademicWithCats—let’s get it started people!” Wrote Mr. Reaching Students in the Back Row.