Smart Homes. Alexa can now guess what you want before you even ask for it. Amazon's engineers are tweaking Alexa's algorithm to help the virtual assistant guess users' requests, and offer to resolve them, before the demand is even uttered. 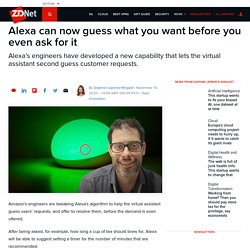 After being asked, for example, how long a cup of tea should brew for, Alexa will be able to suggest setting a timer for the number of minutes that are recommended. Alexa engineers Anjishnu Kumar and Anand Rathi explained in a blog post that the improvement is the continuation of efforts to make interactions with the virtual assistant as natural as possible. Chatting with Alexa should be as natural as talking to another human being, said the engineers, and enabling the technology to anticipate what's coming next in conversation is key to enable a smooth flow of dialogue.

"Now, we're taking another step towards natural interaction with a capability that lets Alexa infer customers' latent goals – goals that are implicit in customer requests but not directly expressed," wrote Kumar and Rathi. The Internet of Things presents – #LikeABosch. How the 'Internet of Things' could be fatal. Researcher Marie Moe woke up after emergency surgery in 2011 with a new pacemaker to correct a heart condition. 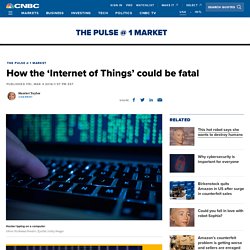 What she didn’t realize at the time was that the lifesaving device in her chest exposed her to a completely different kind of threat. The pacemaker keeping her alive has wireless connectivity capabilities — a detail her doctors didn’t tell her — meaning it could be hacked. Moe was understandably disturbed that it never occurred to her doctors to tell her that her device had wireless capability, and they had not considered the security implications.

“They really had not thought about the pacemaker security at all,” she said. Vulnerabilities like Moe’s are moving quickly from the rare to the extremely common. Security experts believe the tech industry needs to figure out how to secure the “Internet of Things” now, while the architecture is still being developed. “Software bugs could actually kill me,” said Moe. They really hadn’t thought about the pacemaker security at all. Biggest cybersecurity threats in 2016. John Lund | Blend Images | Getty Images Headless worms, machine-to-machine attacks, jailbreaking, ghostware and two-faced malware: The language of cybersecurity incites a level of fear that seems appropriate, given all that’s at stake. 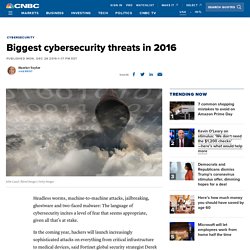 In the coming year, hackers will launch increasingly sophisticated attacks on everything from critical infrastructure to medical devices, said Fortinet global security strategist Derek Manky. “We are facing an arms race in terms of security,” said Manky. Fortinet provides network security software and services, and its customers include carriers, data centers, enterprises, distributed offices and managed security service providers. Here’s how the 2016 threat landscape looks to some experts: Every minute, we are seeing about half a million attack attempts that are happening in cyber space.

Derek Manky Fortinet global security strategist The rise of machine-to-machine attacks Smartphones present the biggest risk category going forward, said Manky. C'est ici: Orange’s go-anywhere IoT GPS Tracker, connected by LoRaWAN. LG ThinQ Benefit_Easy Control. Séquence IoT. Iotmade simple blanks. Iotmadesimple full. IoT Made Simple by Tech Data Smart IoT Solutions. Prepping the cloud for the internet of things. Estimates vary about the number of connected devices there will be as the internet of things shapes up – a recent Gartner estimate was 26 billion by 2020 — but everyone agrees there will be a ton. 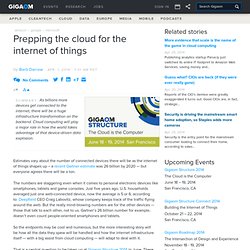 The numbers are staggering even when it comes to personal electronic devices like smartphones, tablets and game consoles. Just five years ago, U.S. households averaged just one web-connected device, now the average is 5 or 6, according to Deepfield CEO Craig Labovitz, whose company keeps track of the traffic flying around the web. But the really mind-blowing numbers are for the other devices — those that talk to each other, not to us. Gartner’s 26 billion number for example, doesn’t even count people-oriented smartphones and tablets. So the endpoints may be cool and numerous, but the more interesting story will be how all the data they spew will be handled and how the internet infrastructure itself — with a big assist from cloud computing — will adapt to deal with it. Yikes.