5 Things Not to Say to Someone Who’s Suicidal — and What to Say Instead. All my life I’ve battled severe depression. 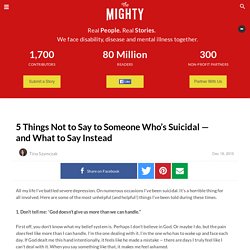 On numerous occasions I’ve been suicidal. It’s a horrible thing for all involved. Here are some of the most unhelpful (and helpful!) Things I’ve been told during these times. No Easy, Reliable Way To Screen For Suicide - Association for Psychological Science. New Curriculum Designed To Combat Suicide By Teaching Hope. Photo credit: iFred A new curriculum designed by the International Foundation for Research and Education on Depression (iFred), Schools for Hope, was created based on research by The Ohio State University that suggests hope is a teachable skill — a vitally important aptitude because hopelessness is the leading symptom of depression and predictor of suicide. 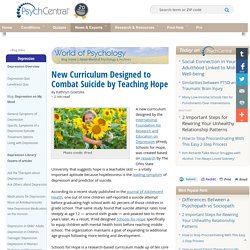 According to a recent study published in the Journal of Adolescent Health, one out of nine children self-reported a suicide attempt before graduating high school with 40 percent of those children in grade school. That same study found that suicide attempt rates rose steeply at age 12 — around sixth grade — and peaked two to three years later. As a result, iFred designed Schools for Hope specifically to equip children with mental health tools before reaching middle school. The organization maintains a goal of expanding to additional age groups following more testing and development. CTL Online. Suicide: Read This First. If you are feeling suicidal now, please stop long enough to read this. It will only take about five minutes.

I do not want to talk you out of your bad feelings. I am not a therapist or other mental health professional - only someone who knows what it is like to be in pain. I don't know who you are, or why you are reading this page. I only know that for the moment, you're reading it, and that is good. I have known a lot of people who have wanted to kill themselves, so I have some small idea of what you might be feeling. Well, you're still reading, and that's very good. Start by considering this statement: Suicide is not chosen; it happens when pain exceeds resources for coping with pain. That's all it's about. Don't accept it if someone tells you, "That's not enough to be suicidal about. " When pain exceeds pain-coping resources, suicidal feelings are the result.

Jakartacitygurl.tumblr. Why Do Japanese Commit Hara-Kiri? A frustrated Bridgestone tire executive committed hara-kiri this week in his boss' Tokyo office. 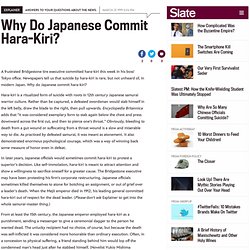 Newspapers tell us that suicide by hara-kiri is rare, but not unheard of, in modern Japan. Why do Japanese commit hara-kiri? Hara-kiri is a ritualized form of suicide with roots in 12th century Japanese samurai warrior culture. Rather than be captured, a defeated swordsman would stab himself in the left belly, draw the blade to the right, then pull upwards. Encyclopedia Britannica adds that "it was considered exemplary form to stab again below the chest and press downward across the first cut, and then to pierce one's throat. " The Logic of Suicide Terrorism - Bruce Hoffman. First you feel nervous about riding the bus. 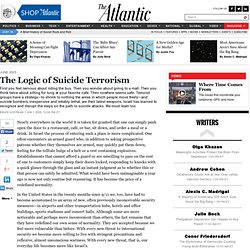 Then you wonder about going to a mall. Then you think twice about sitting for long at your favorite café. Then nowhere seems safe. Terrorist groups have a strategy—to shrink to nothing the areas in which people move freely—and suicide bombers, inexpensive and reliably lethal, are their latest weapons. Israel has learned to recognize and disrupt the steps on the path to suicide attacks. Nearly everywhere in the world it is taken for granted that one can simply push open the door to a restaurant, café, or bar, sit down, and order a meal or a drink. In the United States in the twenty months since 9/11 we, too, have had to become accustomed to an array of new, often previously inconceivable security measures—in airports and other transportation hubs, hotels and office buildings, sports stadiums and concert halls.

I was looking at x-rays with Dr. The early years of suicide terrorism were a simpler time, the officers explained. “I Want to Die” Altucher Confidential. One guy I worked closely with in the Internet boom killed himself about a year ago. 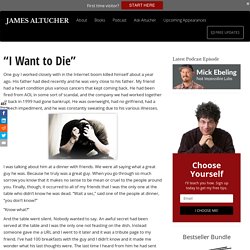 His father had died recently and he was very close to his father. My friend had a heart condition plus various cancers that kept coming back. He had been fired from AOL in some sort of scandal, and the company we had worked together at back in 1999 had gone bankrupt. He was overweight, had no girlfriend, had a speech impediment, and he was constantly sweating due to his various illnesses. Suicide Rates Rise in U.S. Because of the Economy, Not Culture. Suicide rates are on the rise in the twenty-first century, and New York Times columnist Ross Douthat and I have been exchanging thoughts on exactly why. 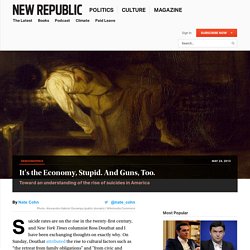 On Sunday, Douthat attributed the rise to cultural factors such as “the retreat from family obligations" and "from civic and religious participation.” I counter-rgued that although many of these trends are troubling, the decline of traditional institutions, and particularly marriage and religion, isn’t clearly responsible for increasing suicide rates. Douthat replied that my piece “did not prove that social belonging doesn’t play a role in suicide rates.”

He’s right, but I wasn't taking issue with his entire argument: I never questioned the relationship between suicide and belongingness, just whether traditional institutions, like marriage and religion, guard against suicide. The data suggests otherwise—that long-term economic trends have the greatest influence on national suicide rates.