Child Nagging and Negotiating - End It With Three Simple Words. When it comes to persistence, few things compare to a child nagging and negotiating to try and get what he wants. 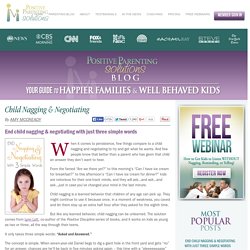 And few people know that better than a parent who has given that child an answer they don’t want to hear. From the famed “Are we there yet?” To this morning’s “Can I have ice cream for breakfast?” To this afternoon’s “Can I have ice cream for dinner?” Kids are notorious for their one-track minds, and they will ask…and ask…and ask…just in case you’ve changed your mind in the last minute.

Child nagging is a learned behavior that children of any age can pick up. But like any learned behavior, child nagging can be unlearned. How to Find Your Purpose and Do What You Love. Your most personal trainer - Elvie. Suicide-by-firearm rates shift in two states after changes in state gun laws:... 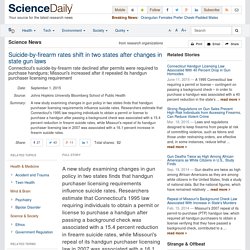 Researchers estimate that Connecticut's 1995 law requiring individuals to obtain a permit or license to purchase a handgun after passing a background check was associated with a 15.4 percent reduction in firearm suicide rates, while Missouri's repeal of its handgun purchaser licensing law in 2007 was associated with a 16.1 percent increase in firearm suicide rates. The study, from researchers with the Johns Hopkins Center for Gun Policy and Research, appears in a special issue of Preventive Medicine that focuses on gun violence prevention research. Key Data and Statistics. The consequences of injury are considerable and costly to public health: In 2007, 182,479 persons died from injuries.1 In 2007, 2,855,000 persons were hospitalized for an injury.2 That same year, 29,757,000 persons were treated for nonfatal injuries in U.S. hospital emergency departments.1 In 2005, injuries accounted for an estimated $406 billion in medical and work loss costs, including deaths, hospitalizations, and ED visits where the patient was treated and released.3. 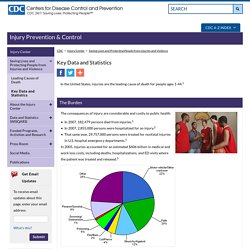 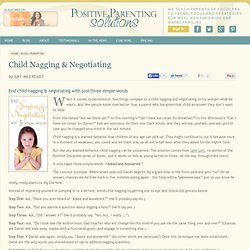 And few people know that better than a parent who has given that child an answer they don’t want to hear. From the famed “Are we there yet?” How I grew from 300 to 5k followers in just 3 weeks — Marketing & Growth Hacking. Round 2: Maximize engagement per tweet. The goosebumps test: Science has found the emotion you need to stay healthy - Association for Psychological Science. Quartz: A link has long been proven between negative moods and ill health. 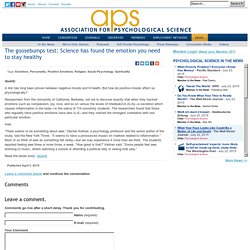 But how do positive moods affect us physiologically? Researchers from the University of California, Berkeley, set out to discover exactly that when they tracked emotions such as compassion, joy, love, and so on versus the levels of interleukin-6 (IL-6)—a secretion which causes inflammation in the body—in the saliva of 119 university students. L-Methylfolate: A Promising Therapy for Treatment-Resistant Depression? For most psychiatrists, treating depression tends to be a frustrating search for the right therapy to help a patient reach remission. 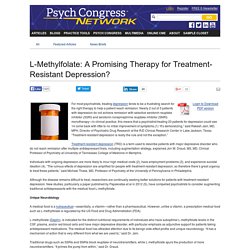 Nearly 2 out of 3 patients with depression do not achieve remission with selective serotonin reuptake inhibitor (SSRI) and serotonin-norepinephrine reuptake inhibitor (SNRI) monotherapy—in clinical practice, this means that a psychiatrist treating 20 patients for depression could see 14 come back with little to no initial improvement of symptoms.(1) “It’s demoralizing,” said Rakesh Jain, MD, MPH, Director of Psychiatric Drug Research at the R/D Clinical Research Center in Lake Jackson, Texas. “Treatment-resistant depression is really the rule and not the exception.” Treatment-resistant depression (TRD) is a term used to describe patients with major depressive disorder who do not reach remission after multiple antidepressant trials, including augmentation strategy, explained Jon W. 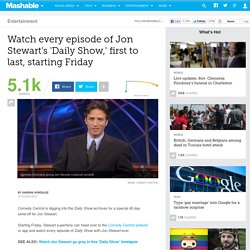 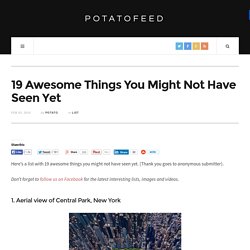 (Thank you goes to anonymous submitter). Don’t forget to follow us on Facebook for the latest interesting lists, images and videos. 1. Aerial view of Central Park, New York. 32 Amazingly Useful Websites Every Woman Needs To Bookmark. 9 Foreign Words the English Language Desperately Needs. As we have demonstrated before, the English language has some grievous holes in it. 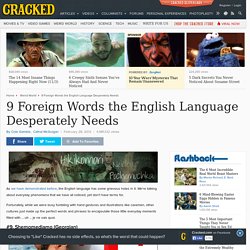 We're talking about everyday phenomena that we have all noticed, yet don't have terms for. Fortunately, while we were busy fumbling with hand gestures and illustrations like cavemen, other cultures just made up the perfect words and phrases to encapsulate those little everyday moments filled with ... uh ... je ne sais quoi. #9. Consolation for Life’s Darkest Hours: 7 Unusual and Wonderful Books that Help Children Grieve and Make Sense of Death. By Maria Popova From Japanese pop-up magic to Scandinavian storytelling to Maurice Sendak, a gentle primer on the messiness of mourning and the many faces and phases of grief. 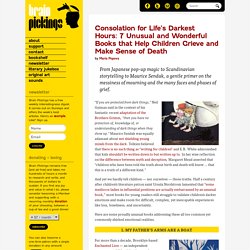 “If you are protected from dark things,” Neil Gaiman said in the context of his fantastic recent adaptation of the Brothers Grimm, “then you have no protection of, knowledge of, or understanding of dark things when they show up.” Maurice Sendak was equally adamant about not shielding young minds from the dark. The Jewish brain : A technical analysis of its psychotic tendencies - The Phora. The Jewish brain : A technical analysis of its psychotic tendencies By Frank Sprinklehopper (Ashkenazi Jew and Scientist) Nov 2008. Now that i have cooled down a little, Draft 2 of this essay has been modified inline with another project which understands sub population behaviour such as jewish operating as a niche in complex system evolution. To summarize the jewish system is purely an expression of the dopamine role within the brain..in effect the jewish system behaves like dopamine. Healthcare blame game: What hospitals charge vs. what they get paid.

Healthcare blame game: What hospitals charge vs. what they get paidBy Dr. Jonathan Kaplan A recent article by The Washington Post discusses a new era in price transparency at first glance. The Centers for Medicare and Medicaid Services, the federal agency that pays hospitals and doctors for services rendered to patients, released the prices hospitals charge for the 100 most common inpatient procedures. How Do Hospitals Get Paid? A Primer. A Crisis of Anxiety Among Aid Workers. Photo An idyllic Mediterranean beach in Tunisia is not usually a place of high anxiety, but that’s where I spent the worst day of my life. I hadn’t slept in three nights and called in sick to work because I could no longer think.

I felt I was losing my mind and spent the day as a zombie on the beach, feeling empty and alone on the sand. It was 2011 and the Libyan war was at its height. I was working on the border of Libya and Tunisia for the United Nations refugee agency, interviewing refugees from sub-Saharan Africa who had been living in Libya when the war broke out. Log In. I need a guide. Harvard Study Unveils What Meditation Literally Does To The Brain. Chart of English Language Roots - PrefixSuffix.com. 5 Bad American Habits I Kicked in Finland. It’s Beginning to Smell a Lot Like Christmas: The Neuroscience of Our Nostalgia. The views expressed are those of the author and are not necessarily those of Scientific American. Shot by the Police in Albuquerque - The New Yorker.

Stephen Torres was meeting with a client at his law office, in downtown Albuquerque, on April 12, 2011, when he received a call from a neighbor, who told him that police officers were aiming rifles at his house. English, Irish, Scots: They’re All One, Genes Suggest. What It Takes to Design a Good Life.

Kierkegaard on Our Greatest Source of Unhappiness. The Definitive Manifesto for Handling Haters: Anne Lamott on Priorities and How We Keep Ourselves Small by People-Pleasing. Admit it: Living In New York Sucks. Does Thinking Really Hard Burn More Calories? Gettier.pdf. The Woman’s Heart Attack - NYTimes.com. CAMH Study Shows Mental Illness Associated With Heavy Cannabis Use. The Mentally Ill Are More Likely to Be Victims Than Perpetrators of Violence.