Getting Unstuck in Life: A Different Perspective  As a dharma teacher, part of my work entails providing one-on-one meetings with practitioners in my community, which I've been offering for over a decade at the time of this writing (the only unfortunate result is that these meetings have become too popular, and I now have a long waiting list before I can meet with new individuals). 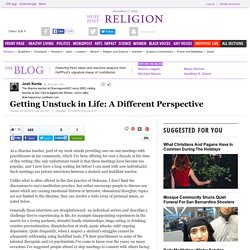 Such meetings are private interviews between a student and buddhist teacher. Unlike what is often offered in the Zen practice of Dokusan, I don't limit the discussions to one's meditation practice, but rather encourage people to discuss any issues which are causing emotional distress or intrusive, obsessional thoughts; topics are not limited to the dharma; they can involve a wide array of personal issues, as noted below. What I'd like to discuss here is a different way of perceiving our challenges; most people I meet with consider inner conflicts or struggles as problems, something that is 'pointless' and should be 'gotten rid of as quickly as possible.' Anatta-lakkhana Sutta: The Discourse on the Not-self Characteristic.

Thus it was heard by me. 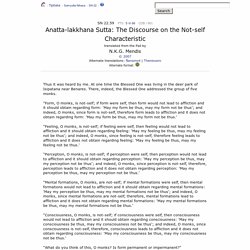 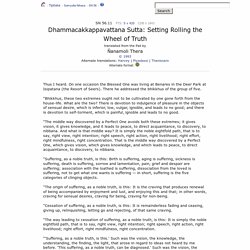 On one occasion the Blessed One was living at Benares in the Deer Park at Isipatana (the Resort of Seers). There he addressed the bhikkhus of the group of five. "Bhikkhus, these two extremes ought not to be cultivated by one gone forth from the house-life. What are the two? There is devotion to indulgence of pleasure in the objects of sensual desire, which is inferior, low, vulgar, ignoble, and leads to no good; and there is devotion to self-torment, which is painful, ignoble and leads to no good.

"The middle way discovered by a Perfect One avoids both these extremes; it gives vision, it gives knowledge, and it leads to peace, to direct acquaintance, to discovery, to nibbana. "The origin of suffering, as a noble truth, is this: It is the craving that produces renewal of being accompanied by enjoyment and lust, and enjoying this and that; in other words, craving for sensual desires, craving for being, craving for non-being. The Nobility of the Truths. The most common and widely known formulation of the Buddha's teaching is that which the Buddha himself announced in the First Sermon at Benares, the formula of the Four Noble Truths. 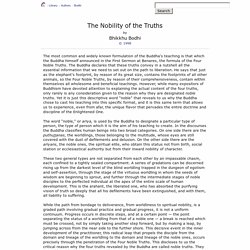 The Buddha declares that these truths convey in a nutshell all the essential information that we need to set out on the path to liberation. He says that just as the elephant's footprint, by reason of its great size, contains the footprints of all other animals, so the Four Noble Truths, by reason of their comprehensiveness, contain within themselves all wholesome and beneficial teachings.

However, while many expositors of Buddhism have devoted attention to explaining the actual content of the four truths, only rarely is any consideration given to the reason why they are designated noble truths. BuddhaNet Audio: The Buddha's Teaching As It Is", by Bhikkhu Bodhi. Ten Audio lectures in on the fundamentals of the Buddha's Teaching, by Venerable Bhikkhu Bodhi Bhikkhu Bodhi is an American Buddhist monk from New York City. 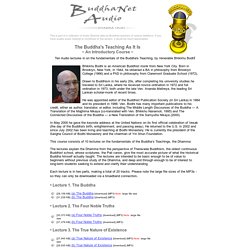 Born in Brooklyn, New York, in 1944, he obtained a BA in philosophy from Brooklyn College (1966) and a PhD in philosophy from Claremont Graduate School (1972). Drawn to Buddhism in his early 20s, after completing his university studies he traveled to Sri Lanka, where he received novice ordination in 1972 and full ordination in 1973, both under the late Ven. Ananda Maitreya, the leading Sri Lankan scholar-monk of recent times. He was appointed editor of the Buddhist Publication Society (in Sri Lanka) in 1984 and its president in 1988.