Stas Korotaev's Blog - Coming up with ideas for a Game Jam game. The following blog post, unless otherwise noted, was written by a member of Gamasutra’s community. 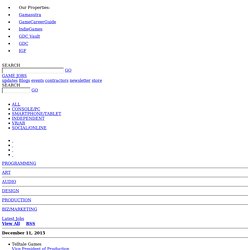 The thoughts and opinions expressed are those of the writer and not Gamasutra or its parent company. Coming up with ideas when you are on a tight schedule can be hard. But the thing is that you need to be able to complete it during the game jam and still have time for polish. In a lot of cases, it must fit the theme as well. Theme. Stas Korotaev's Blog - Why Should You Participate in Game Jams. The following blog post, unless otherwise noted, was written by a member of Gamasutra’s community. 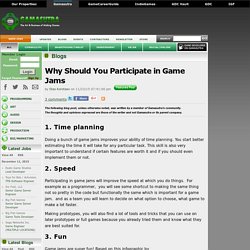 The thoughts and opinions expressed are those of the writer and not Gamasutra or its parent company. 1. Time planning Doing a bunch of game jams improves your ability of time planning. You start better estimating the time it will take for any particular task. 2. Participating in game jams will improve the speed at which you do things. Making prototypes, you will also find a lot of tools and tricks that you can use on later prototypes or full games because you already tried them and know what they are best suited for. 3. The Train Jam game jam rides again in 2016.

Developers who want to ride the rails from Chicago to California in time to attend GDC 2016 in San Francisco and make a game along the way can sign up today to do so in the third annual Train Jam game jam. 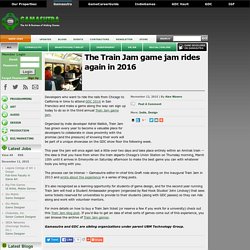 Organized by indie developer Adriel Wallick, Train Jam has grown every year to become a valuable place for developers to collaborate in close proximity with the promise (and the pressure) of knowing their work will be part of a unique showcase on the GDC show floor the following week. This year the jam will once again last a little over two days and take place entirely within an Amtrak train -- the idea is that you have from when the train departs Chicago's Union Station on Thursday morning, March 10th until it arrives in Emeryville on Saturday afternoon to make the best game you can with whatever tools you bring with you. Douglas Lynn's Blog - Lessons of Rapid Prototyping. The following blog post, unless otherwise noted, was written by a member of Gamasutra’s community. 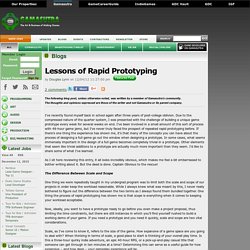 The thoughts and opinions expressed are those of the writer and not Gamasutra or its parent company. Game jam contest puts your game in front of big-name judges. A novel new take on the "game jam" that takes inspiration from reality shows has attracted a number of respected game industry luminaries to judge the finalists for its cash prize. 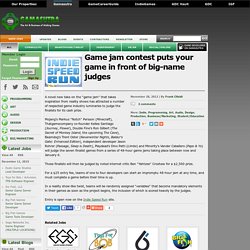 Those finalists will then be judged by noted internet critic Ben "Yahtzee" Croshaw for a $2,500 prize. For a $25 entry fee, teams of one to four developers can start an impromptu 48-hour jam at any time, and must complete a game before their time is up. Entry is open now on the Indie Speed Run site. Dirk Knemeyer's Blog - Design Axioms for Game UI Part II: Feedback. The following blog post, unless otherwise noted, was written by a member of Gamasutra’s community. 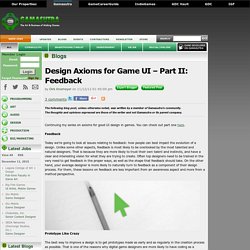 The thoughts and opinions expressed are those of the writer and not Gamasutra or its parent company. Continuing my series on axioms for good UI design in games. You can check out part one here. Feedback Today we're going to look at issues relating to feedback: how people can best impact the evolution of a design. Prototype Like Crazy The best way to improve a design is to get prototypes made as early and as regularly in the creation process as possible. Pixel Perfect Remember our Lorem Ipsum lesson from Part I? 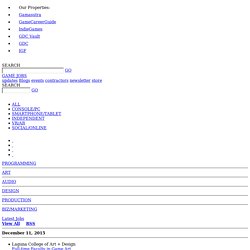 Our correspondent Matt Hawkins participated as advisor to Team SVA, and has provided a diary of his experiences at the Retro Redux event to Gamasutra.] Saturday April 2, 2005 - 9:55am – It's another wet and dreary New York City morning, and I find myself drying off in the crowded lobby of a Parsons building. In addition to Parsons students, there are those from several other schools, including NYU, Mercy College, Rensselaer, and the School of Visual Arts where I attend.

Aside from the awkwardness that comes from having to be awake early on a Saturday morning, there's a nervous energy that's pervasive throughout, which is to be expected. Ethics Of Game Design. When it comes to the ethical choices that game developers make when they decide what to put into their creations, they face the same moral issues that artists in any other communications medium face. 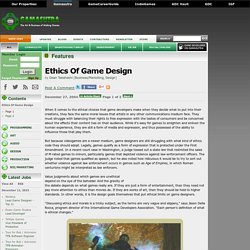 They must struggle with balancing their rights to free expression with the tastes of consumers and be concerned about the effects their content has on their audience. While it's easy for games to enlighten and enliven the human experience, they are still a form of media and expression, and thus possessed of the ability to influence those that play them. But because videogames are a newer medium, game designers are still struggling with what kind of ethics code they should adopt.

Legally, games qualify as a form of expression that is protected under the First Amendment. In a recent court case in Washington, a judge tossed out a state law that restricted the sales of M-rated games to minors, particularly games that depicted violence against law-enforcement officers. Indie Game Jam 2004: Fun and Frustration in Physics. Postcard from GDC 2004: The Experimental Gameplay Workshop. Stas Korotaev's Blog - Coming up with ideas for a Game Jam game.