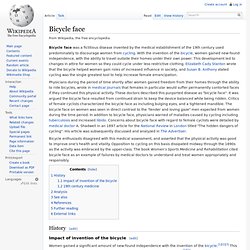 With the invention of the bicycle, women gained new-found independence, with the ability to travel outside their homes under their own power. This development led to changes in attire for women so they could cycle under less restrictive clothing. Elizabeth Cady Stanton wrote that the bicycle helped women gain roles of increased influence in society, and Susan B.

Anthony stated cycling was the single greatest tool to help increase female emancipation. Bicycle enthusiasts disagreed with this medical assessment, and asserted that the physical activity was good to improve one's health and vitality. History[edit] Impact of invention of the bicycle[edit] Elizabeth Cady Stanton wrote that the bicycle was a tool which motivated women to gain strength and take on increased roles in society.[2] Susan B. 19th century medicine[edit] Analysis[edit] Are these the most terrifying trousers ever? The 17th century NECROPANTS made from corpse legs - and are supposed to be lucky. The Museum of Icelandic Sorcery & Witchcraft in Holmavik houses the only known intact pair of necropants In order to make the necropants, or nábrók, an individual had to get permission from a living man to use his skin after his deathAccording to legend, the trousers brought their wearer wealth and luck, but had to be passed on to a future generation before his own death By Sarah Griffiths Published: 12:33 GMT, 25 October 2013 | Updated: 15:18 GMT, 25 October 2013. 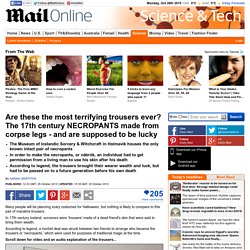 Dick Cheney: Heart implant attack was credible. 21 October 2013Last updated at 09:06 ET Former US vice-president Dick Cheney has suffered from heart problems for much of his life. 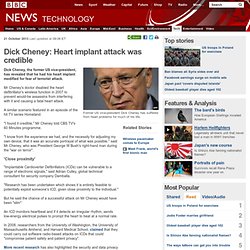 Dick Cheney, the former US vice-president, has revealed that he had his heart implant modified for fear of terrorist attack. Mr Cheney's doctor disabled the heart defibrillator's wireless function in 2007 to prevent would-be assassins from interfering with it and causing a fatal heart attack. A similar scenario featured in an episode of the hit TV series Homeland. Overcome the effects of circumcision with SenSlip, the artificial retractable foreskin.

List Your Odd Personality Quirks - The Geek Culture Forums. Just a few things that initially came to mind: i don't use capital letters in e-mails, postings, etc., unless the item is job or school-related. i don't remember why this started, but it's been the case for years. as much as i'd love to pass it off as an attempt to emulate e.e. cummings, it's really just habit at this point. on a related note, one of my biggest pet peeves is that sort of chat-speak that uses numbers and single letters instead of words, e.g. 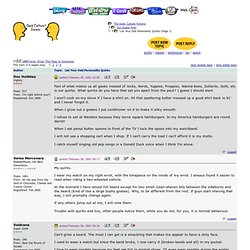 "how r u? I m gr8! " argh. i take notes with a blue pen on light green legal-ruled paper. notes are taken in an elaborate, highly codified outline structure using the legal rule as a basepoint. 100 Character Quirks You Can Steal from Me. Okay, well, I decided that I wanted to contribute and as part of my new commitment to writing more and being more involved in the writing of others, I thought that it might be neat if I can come up with a list of personality quirks or traits that someone might find useful in fleshing out a character. 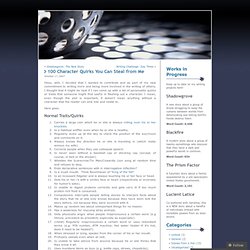 I mean, even though the plot is important, it doesn’t mean anything without a character that the reader can sink into and relate to. Here goes. Normal Traits/Quirks. Fecal transplant pill knocks out recurrent C. diff infection. Swallowing pills containing a concentrate of fecal bacteria successfully stops recurrent bouts of debilitating Clostridium difficile (C. diff) infection by rebalancing the bacteria in the gut, suggests a study being presented at the IDWeek 2013™ meeting today. 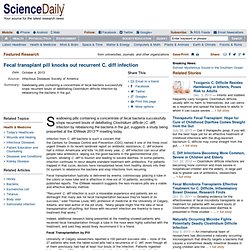 Infection from C. diff bacteria is such a concern that the Centers for Disease Control and Prevention (CDC) named it one of the three most urgent threats in its recent landmark report on antibiotic resistance. C. diff sickens half a million Americans and kills 14,000 every year. Today I Learned Something New. Beauty Lift High Nose. Push up that nose of yours to create the perfect profile with this handy Beauty Lift High Nose, a beauty gadget that applies gentle electric vibrations from the bottom, side and front. 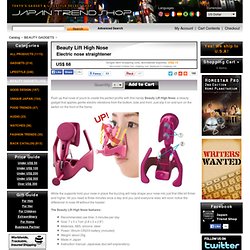 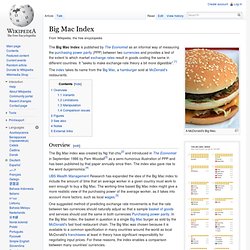 How many burgers you get for US$50? (Jan 2012) The Big Mac Index is published by The Economist as an informal way of measuring the purchasing power parity (PPP) between two currencies and provides a test of the extent to which market exchange rates result in goods costing the same in different countries. It "seeks to make exchange-rate theory a bit more digestible".[1] Overview[edit] Pentagon Study Finds Beards Directly Related To Combat Effectiveness. TAMPA, FL – Forget new gear, weapons, or sophisticated targeting systems. The newest tool coming to combat troops is low-tech: beards. In a report released yesterday, research think-tank Xegis Solutions noted that beards have a direct correlation to combat effectiveness. Jonathon Burns was the lead researcher in the study. “We took 100 soldiers. 25 were Special Forces qualified and had beards, 25 were Special Forces qualified without beards, 25 were regular Army allowed to grow beards for the study, and the last 25 were regular Army without beards.

All 100 of these subjects were in direct combat in Afghanistan during the study.” He continued, “Xegis Solutions had several teams of researchers embedded with these troops to make observations on their combat effectiveness. Home. Travelling Toys - Little Things on Big Adventures - Viewing Travelog: Hypno-dog.